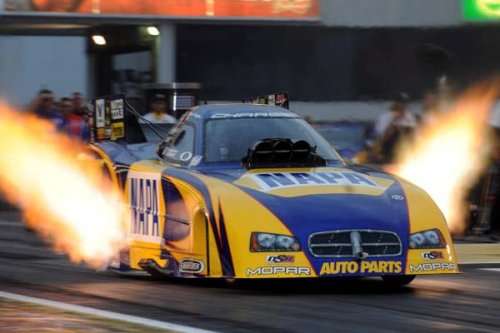 Tonight marked the first two rounds of qualifying for the Toyota NHRA SuperNationals in Englishtown New Jersey and while Toyota may be the title sponsor – it was the NAPA Dodge Charger funny car driven by Ron Capps who made the most noise as he turned a record elapsed time of 3.964 seconds on the 1,000 foot long track.
Advertisement

Englishtown Raceway in New Jersey is known for being one of the fastest tracks on the NHRA schedule and with cool temperatures Friday night, the NHRA field was primed to turn in some amazing times with Team Mopar driver Ron Capps making sure that the Funny Car class didn’t disappoint. By the end of tonight’s racing, Capps and Top Fuel driver Spencer Massey both set new records for the fastest lap times in their respective classes.

Capps came out for the first round of qualifying in Englishtown for the Toyota NHRA SuperNationals with his NAPA Auto Parts Dodge Charger and turned a very respectable 4.079 seconds at 309.56 miles per hour. This placed him third behind Robert Hight in the Auto Club Mustang (4.077s,312.77mph) and Mike Neff in the Castrol GTX Mustang (4.052s, 312.71). In the second round of qualifying, six of the 20 cars attempting to qualify ran faster than Mike Neff’s top qualifying time of 4.052 but it was Ron Capps in the NAPA Charger who claimed the top spot with his remarkable record time of 3.964 seconds with a trap speed of 320.89 miles per hour. This elapsed time of 3.964 seconds beats the previous funny car record set by fellow Dodge Charger driver Matt Hagan of 3.995 seconds and Capps’ speed of 320.89mph is good enough to best Jack Beckman’s record speed (also in a Dodge Charger) of 318.99mph – both of which were set in Concord NC last September.

For those who are unfamiliar with NHRA drag racing, Ron Capps Dodge Charger funny car accelerated from a dead stop to 320.89 miles per hour in just 1,000 feet – taking him just 3.964 seconds. In dashing from 0-321 miles per hour in just under 4 seconds, Capps’ Charger funny car hit 321mph tonight quicker than some of the world’s top performance cars can reach 60mph from a stop.

The NHRA Funny Car class has two more rounds of qualifying scheduled for Saturday so teams will have a chance – albeit a slim one – to best Ron Capps new NHRA record. The Funny Car class is set to run rounds three and four at 12:45 and 3:15pm.

In addition to Ron Capps setting a new funny car record for the fastest elapsed time and trap speed with his Dodge Charger, top fuel dragster driver Spencer Massey set a new top fuel record elapsed time with a run of 3.728 seconds, which beats Del Worsham’s record of 3.735 set last October. Massey’s trap speed of 329.91 was not enough to beat his own top fuel record of 332.18 set earlier this year. For his efforts, Massey will go into round 3 qualifying in Englishtown with the top spot in Top Fuel.

Congratulations to Ron Capps and Spencer Massey for their record setting runs and good luck to the pair of Schumacher Racing cars through the rest of the Englishtown event. With two of their team cars setting records, the Schumacher team certainly is one of the teams to beat this weekend.

The elimination rounds for the Toyota NHRA SuperNationals are set to begin this Sunday with round one for the Top Fuel and Funny Car classes scheduled to begin at 11am EST.