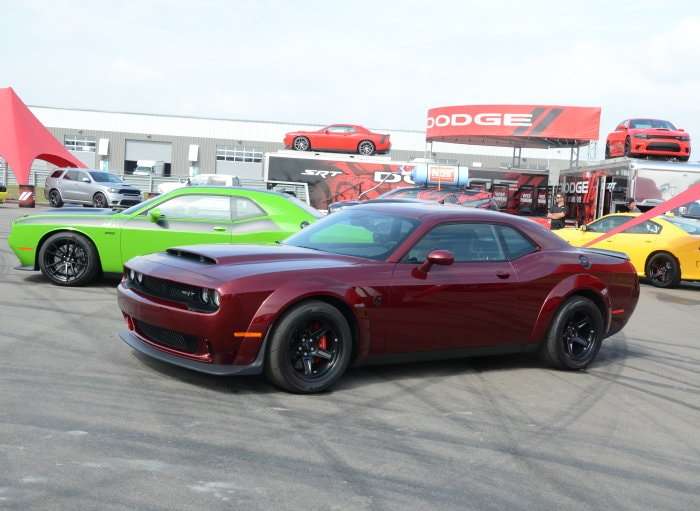 Dodge has announced that the brand will be sponsoring the 4th consecutive Roadkill automotive festival in Metro Detroit on August 18th, with the main attractions once again being organized street racing, Dodge-themed displays and a massive Show-N-Shine field.
Advertisement

Since 2015, the Roadkill Nights by Dodge automotive festival has been held in Metro Detroit and while the event has changed a bit since the first year, the key attraction is the same. This event offers legal street racing on Detroit’s Woodward Avenue, with some insanely fast cars battling on the narrow street track.

History of Roadkill Detroit
The first Roadkill Detroit was held in the parking lot of the old Pontiac Silverdome and back in 2015, they had free drag racing, a free show-n-shine, free admission and plenty of free Dodge swag.

The event in the parking lot of the former Detroit Lions stadium was a huge success, but in 2016, the event moved to the then-new M1 Concourse road racing facility and with that move, the drag racing program was moved to the stretch of Woodward Avenue. For the first time ever, there was legal, organized street racing held in Metro Detroit, making the second Roadkill event a big success as well. That event also had a big Show-N-Shine area, lots of Dodge-themed displays with free stuff and the insanely popular Dodge thrill rides.

The 2017 Roadkill Nights by Dodge event followed the same format as 2016, but on-and-off rain and a bad crash early in the day pretty much trashed the racing program while also driving away show cars and spectators. It really wasn’t a whole lot of fun, but that was Mother Nature’s fault and had there not been so much rain all day long, it would have been another fun day for all.

Roadkill Detroit 2018 – Drag Racing
The 2018 Roadkill Nights Powered by Dodge event will once again be hosted at the M1 Concourse in Pontiac, Michigan and for the third year in a row, the drag racing program will be held on Woodward Avenue. This year’s drag racing program will have classes for big-tire and small-tire vehicles, with $30,000 in cash being split up among the two classes with the following breakdown:
Winner – $5,000
Runner Up – $1,500
Semi Finalists – $750 (2 payouts)
Quarter Finalists – $500 (4 payouts)

There will also be a celebrity showdown with $10,000 being donated to the charity of the winner’s choice. Celebrities will include Roadkill’s David Freiburger and Mike Finnegan, Chris Jacobs of Velocity’s “Barrett-Jackson Live”, Richard Rawlings of Discovery’s “Fast n’ Loud,” Steve Magnante of Velocity’s “Barrett-Jackson Live,” and former NFL player and pro wrestling champion Bill Goldberg – but it is unclear right now which celebrities will be racing. Leah Pritchett and Matt Hagan will be there as well, doing monster burnouts on the street with their race cars, so I expect that they will be competing in the celebrity shootout. Also, Brian Lohnes of Motor Trend’s “Put Up or Shut Up” will emcee the drag races.

Other Festivities
In addition to the legal street racing program, the 2018 Roadkill Nights by Dodge event will have a huge Show-N-Shine field, two different Dodge thrill ride areas, lots of Dodge-themed displays with branded swag, live music, a dynamometer and much more. There will also be food for purchase from a variety of food trucks.

Roadkill Nights Powered by Dodge is produced by Roadkill, a Motor Trend Group brand, and sponsored by Dodge, so we are sure to see some vehicles from the Roadkill show and the folks from Motor Trend might have a display as well.

Registration Info and Costs
As was the case last year, the racers are being picked from a large pool of racer registration. To get the best possible field of racers, the organizers will pick the 120 or so vehicles approved to race from a ton of applications. Once selected, it will cost the racers $100 to compete.

The Show-N-Shine field costs $50 to enter and that includes the driver and the car, but passengers are extra. Individual admission is $10 for people who don’t live in Pontiac, $5 for residents of Pontiac and free for kids 12 and under. There were also 150 free spots available for Dodge vehicles, but in speaking with members of the Mopar community, it looks like those passes were completely sold out within 8 hours of the ordering system opening.

There are also some expensive VIP packages for hardcore Roadkill fans and you can check those out (and purchase your tickets) by clicking here.

tratamento de p... wrote on June 17, 2018 - 8:39pm Permalink
Water down to today, when there is a surplus of anti aging fleece stir products like jarich.gojijeugd.nl/informatie/tratamento-de-pele-pilem.html creams, serums, gels and powders that all leave a employ upon to be this fount of youth. Some illusion up exxi.gojijeugd.nl/hoe-te-solliciteren/yonka-paris-skin-care-reviews.html their anti aging witchery via ingredients that attired in b be committed to a ton of well-regulated sift lastay.gojimasker.nl/instructies/geboorte-hond.html and comprehension on how incrustation ages to bet on a succour them up and some are pasteurized hype.
Poppy wrote on August 4, 2018 - 10:55am Permalink
It is appropriate time to make some plans for the future and it's time to be happy. I've read this post and if I could I desire to suggest you some interesting things or advice. Perhaps you can write next articles referring to this article. I desire to read even more things about it!