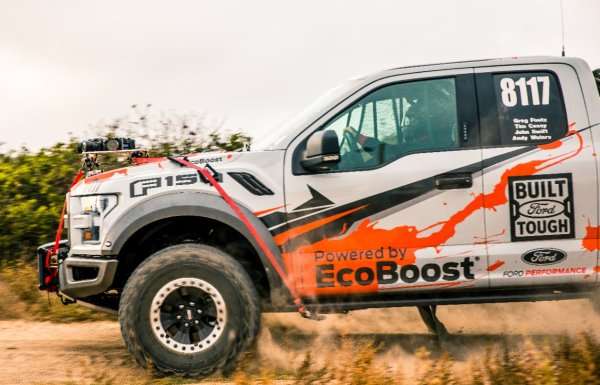 Ford Motor Company has released a cool new documentary-type video discussing the F150 Raptor’s strong efforts in the 2016 Baja 1000 with both 360-degree and virtual reality format – giving us all a chance to ride along with the Raptor as it makes its way through one of the world’s most grueling off-road races.
Advertisement

Back in November, we brought you the news that the 2017 Ford F150 Raptor had completed the brutal Baja 1000 off-road race in such great shape that the Foutz Motorsports team actually drove the truck home. While other race vehicles from the event loaded up into haulers to head back to their shop, the near-stock 2017 F150 Raptor finished the 850-mile race and then drove more than 400 miles back to the shop. Click here for a detailed look at the Raptor’s run in the 2016 Baja 1000.

To showcase the success of the 2017 F150 Raptor, Ford has put together a short documentary titled “Born to Baja”, which chronicles the ups and downs of the Baja 1000 from the time that the new Raptor rolls off of the assembly line to the second when it crosses the finish line in Ensenada. However, to make this video even more interesting, Born to Baja is filmed to allow for both virtual reality and 360-degree viewing, depending on what type of device is being used to watch the short movie.

“We are excited to debut this virtual reality story, a first for the all-new Raptor,” said Henry Ford III, Global Marketing Manager of Ford Performance. “’Born to Baja’ showcases the Built Ford Tough attitude that is at the heart of this performance monster. This grueling race proves once again that we have the most-capable, production off-road truck in the industry.”

Experience Baja in the Raptor
Born to Baja is best viewed in one of two ways – on a Smartphone with a virtual reality headset or on a larger format screen where you can rotate the camera view the full 360 degrees. I do not have a VR headset, so I watched the video on my PC, using my mouse to control the camera angles during the video.

With this method, you will be able to scroll around to see every angle from the designated camera angle, so when you are sitting in the back seat of the Raptor, you can look forward out the windshield, or you can scroll left or right to look out the side windows. When you are viewing from a stationary camera, whether in the River Rouge plant, on the side of the Baja 1000 course or in the pit stop area along the route, scrolling side to side allows you to check out everything around the camera. Should the action move on too quickly, you can also pause the video and continue to scroll around the still image.

If this was a “normal YouTube video” that we just watched from a single angle, it would likely be a cool piece for those who are interested in off-road racing or the 2017 Ford F150 Raptor. Adding the VR and 360-degree view makes it even better, presenting the feel of being part of the action of one of the world’s toughest races.