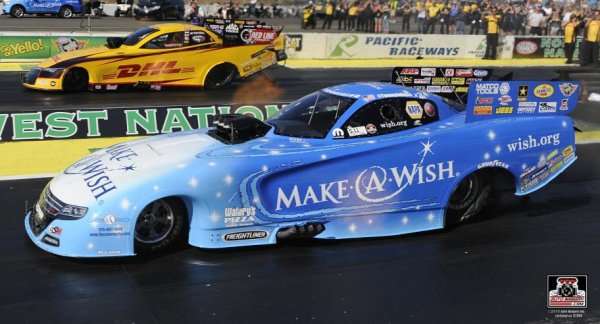 Records Fall as Dodge Charger Wins 13th in 16, Johnson Gets #2

The incredible domination of the 2015 Mello Yello Drag Racing Series Funny Car class by the 2015 Dodge Charger R/T race cars of Don Schumacher Racing continued this past weekend, with Jack Beckman setting a new class record while Tommy Johnson Jr took the big win for his 2nd of the season – the team’s 6th straight win.
Advertisement

The way that the 2015 Dodge Charger R/T funny cars have dominated the class this season is surely anything but funny to the rest of the teams in the NHRA Funny Car class. Coming into the Northwest Nationals in Seattle, Washington, Don Schumacher Chargers had won the previous 5 races and 12 of the first 15 races of the season. On the season, Beckman has claimed 5 wins, Matt Hagan has taken 4 wins, Ron Capps has claimed a pair of wins and Tommy Johnson Jr has “only” won a single event – but he would have his comeuppance in Seattle.

Qualifying
As has often been the case this season, the Dodge Charger funny cars didn’t get out to a great start, with the exception of Matt Hagan. Hagan turned a round-best of 4.085 at 292.08mph to take the top spot on the qualifying ladder. However, the rest of the Chargers struggled in round 1 of qualifying, with Capps sitting 9th, Beckman 10th, Johnson 12th and John Hale was 13th.

In round 2, things got serious when Jack Beckman became the first funny car driver to dip into the 3 second range, with his Infinite Hero Dodge Charger R/T running a 3.997 at 314.17mph. That secured him the top spot on the ladder, but his teammates all had strong runs as well. Johnson ran a 4.036 to jump to 2nd, Hagan ran a 4.059 to sit 4th, and Capps ran a 4.084 to move into the 7th spot.

In round 3 of qualifying, every single Dodge Charger ran slower than they had in round 2, so they all relied on their previous runs. Beckman remained in 1st, but Johnson dropped to 4th, Hagan dropped to 6th and Capps dropped to 9th.

In round 4, things got serious once again as Jack Beckman set the new funny car record, running an incredible 3.912 at 322.88mph, securing his spot atop the ladder. Just to be clear, that is the quickest time ever run in competition by a modern NHRA funny car on the 1000 foot track. 0-322 miles per hour in under 4 seconds.

Capps and Johnson both turned solid times in round 4, but quick runs by other teams pushed Hagan, Johnson and Capps back in the field. Johnson started 5th, Capps was 8th and Hagan 9th while non-DSR Charger driver John Hale started in the 15th ladder position.

Eliminations
In round 1, Jack Beckman ran yet another 3 second pass, destroying Terry Haddock, who let off very early. Tommy Johnson Jr beat up Paul Lee to advance and in a Mopar on Mopar battle, Ron Capps knocked out Matt Hagan in a race that saw Hagan slow late in the run. Finally, John Hale had another rough run, losing to the Toyota Camry of Del Worsham. 3 of the 4 Don Schumacher Dodge Chargers advanced to round 2, but they were all on the same side of the bracket – guaranteeing that we wouldn’t see another all Mopar final round.

In round 2, Beckman and Capps went head to head and after Capps had a tiny starting line advantage, Beckman turned the quickest time of the round once again to secure his spot in round 3. Tommy Johnson Jr soundly beat Chad Head, setting up a Mopar on Mopar battle in the next round where we would meet Beckman.

In the other half of the round 2 bracket, Del Worsham disposed of Tim Wilkerson’s Ford Mustang while John Force knocked out Alexis DeJoria.

In the 3rd round, Tommy Johnson Jr was the first driver to make it down the track quicker than Jack Beckman, with Johnson taking a slight starting line advantage and turning it into a solid win. On the other side of the bracket, John Force and his Chevy Camaro pulled a big holeshot advantage over Del Worsham, but Force couldn’t hold off the Toyota on the top end and Worsham went onto the finals.

The Finals
In the finals, Tommy Johnson Jr was looking for his 2nd win of the season while Del Worsham was hoping to give Toyota its first win of the season. However, when Johnson destroyed Worsham on the starting line, the fact that Del’s Camry went quicker didn’t make any difference, as the 2015 Dodge Charger funny car took yet another win.

Championship Standings
With just two events left in the first portion of the 2015 Mello Yello Drag Racing Series schedule, the top three spots in the funny car class are all Don Schumacher Dodge Chargers. Matt Hagan is still in the top spot, clinging to a 5 point lead over Jack Beckman. Tommy Johnson Jr is 3rd place, sitting 114 points back of Hagan, John Force is 152 back in 4th and Del Worsham is 173 out in 5th spot. Ron Capps is in 6th, 189 points out of first place, meaning that DSR Chargers comprised 4 of the top 6 in the class standings.

13 wins in 16 races, top 3 in season standings and 4 out of the top 6, at least two wins for every driver and at least 4 wins for 2 drivers. The Don Schumacher 2015 Dodge Charger R/T teams are putting on a show like we haven’t seen in ages…maybe, ever.