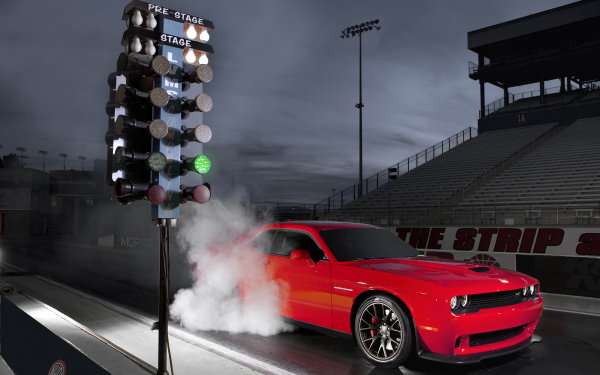 In many of the discussions around the internet pertaining to the 2015 Dodge Challenger SRT Hellcat, there are some people who insist that this 600+ horsepower Challenger will be a proper muscle car that will beat the Corvette Z06 – but I am here to tell those folks that even if the Hellcat packs more power, the Z06 is going to have a decisive advantage.
Advertisement

The Chrysler Group has been pretty vague with reference to the power output of the new 2015 Dodge Challenger SRT, but they have promised at least 600 horsepower and at least 575lb-ft of torque. Some of the e-thugs online insist that the output of the Hellcat will equal that of the V10 under the hood of the SRT Viper and those same people seem to think that a new SRT Challenger with 640 horsepower and 600lb-ft of torque will beat the 2015 Corvette Z06. The basis of their claim is that the Challenger will have 640 horsepower while the Z06 will only have 625 horsepower.

You know, because just having more horsepower guarantees that a vehicle is faster than a vehicle with less power. Or not.

I would imagine that most people with any common sense realize that in a battle between a Corvette and a Challenger, the Dodge would need way more than 15 extra horsepower to outrun the C7 in any venue – be it a drag strip or a road course. However, for those folks who actually think that the big, bruising Challenger with 640hp would beat a C7 Corvette with 625, I feel the need to explain why that just won’t be the case.

The first problem is that much like the 2015 Challenger SRT Hellcat, the 2015 Chevrolet Corvette Z06 specs are not official. Although the badging on the dash board of the new Z06 at the 2014 North American International Auto Show in Detroit stated that it would have 625 horsepower and 635lb-ft of torque, those numbers are “at least” figures much like the 600 horsepower of the Hellcat Challenger. In other words, while the Challenger’s “at least 600hp and 575tq” could mean 640hp and 600lb-ft of torque, the Corvette’s “at least 625hp and 635tq” could just as easily mean 650hp and 650lb-ft of torque.

What these folks also seem to forget is that the Dodge Challenger is a big, heavy muscle car with a curb weight that will comfortably exceed 4,000lbs and based on the weight of the current (2014) models and the additions to the SRT Hellcat package, this 600+ horsepower Mopar muscle car could tip the scales in the 4,300lb range. On the other hand, the 2015 Chevrolet Corvette Z06 will likely weigh closer to 3,100lbs so even if the Challenger has a very modest advantage of 15 horsepower, the Z06 will have a massive power to weight ratio that will guarantee that the C7 Z06 will probably beat the SRT Hellcat Hemi pretty handily in pretty much any possible performance venue.

Oh, and for those folks who expect the SRT Hellcat Challenger to beat down the C7 Corvette Z06 and after reading this they are assuming that I am yet another journalist jumping on the Chevy bandwagon (or working for the GM advertising dollars), I should point out that I am the proud owner of several high performance Mopar vehicles. However, as much as I love my Mopars – I know that it will take far, far more than 640hp for the 2015 Challenger SRT Hellcat to beat a C7 Z06. It is fine to love a brand and the vehicles that the brand offers…but being unrealistic in your claims and expectations doesn’t do you or the enthusiast community any good.