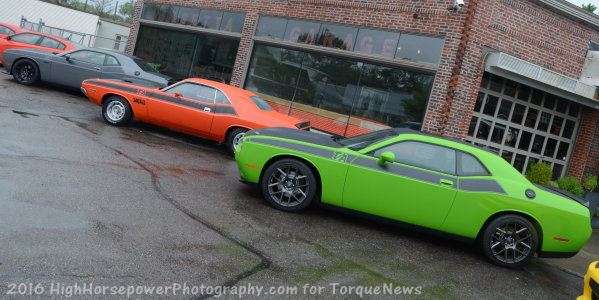 Since discussing the introduction of the new 2017 Dodge Challenger T/A, I have received a handful of questions about which trimlines it will be replacing and since there has been no word on any of the existing trimlines from 2016 being killed off for 2017 – I wanted to do a piece detailing what the 2017 Challenger trimline lineup should look like when it goes on sale later this year.
Advertisement

While FCA hasn’t offered the full digs on the 2017 Dodge Challenger lineup, we know now that the new T/A, T/A Plus and T/A 392 packages will be part of the 2017 lineup. Since first introducing the vintage-named package, with the T/A and T/A Plus being based on the R/T and R/T Plus while the T/A 392 is based on the Scat Pack, there is some confusion on which trimlines will still exist for 2017.

So far, FCA hasn’t mentioned any of the trimlines from 2016 being removed from the 2017 Dodge Challenger lineup. Based on that, it seems as though the T/A models will join the current list of trimlines for the 2016 model year, leading to a list of 13 trimlines for the 2017 model year with 4 different engines. There hasn’t been any word thus far of power increases, so for this discussion, we will use the current power figures.

Considering that there could be so many trimlines for the 2017 Dodge Challenger and having already gotten some questions from readers, here is a breakdown of what the 2017 model year lineup should look like for the Mopar muscle car.

2017 Dodge Challenger V6 and Hellcat
Those 2017 Dodge Challenger buyers who want the Pentastar V6 will be able to pick from the SXT or SXT Plus trimlines. Provided that there are no changes for the new model year, these trimlines should come with 305 horsepower and a standard 8-speed automatic transmission.

The 6.2L Hellcat Hemi will likely continue on for the 2017 model year in a very similar form to the 2016 models, with a standard 6-speed manual transmission and a optional 8-speed automatic.

I grouped these two models together because right now, it looks like there won’t be any real changes for 2017 models with the V6 or Hellcat engine. That could change once full 2017 information is announced, but for the time being, it appears that the changes will be focused on those models with the 5.7L and 6.4L Hemi V8s.

2017 Dodge Challenger with the 5.7L Hemi
The 2017 Dodge Challenger should be available with the 5.7L Hemi in six different trimlines – R/T, R/T Plus, R/T Shaker, R/T Shaker Plus, T/A and T/A Plus. Regardless of the trimline chosen, this engine should offer 375hp and 410lb-ft of torque with the 6-speed manual transmission, although the 8-speed automatic transmission should be optional with every Hemi-powered trimline.

The Challenger R/T is essentially the base V8 car while the R/T Plus package generally adds some luxury goodies. The R/T Shaker is the R/T with the Shaker hood system and the accompanying features which come with the Shaker package, while the R/T Shaker Plus adds luxury items. Finally, the new T/A package adds a long list of features from the Scat Pack and Hellcat models to the Challenger R/T and the T/A Plus adds luxury items to that new go-fast package.

In terms of pricing, we only have the pricing for the new T/A models (not the rest of the 2017 Challenger lineup), but based on current figures, the Challenger R/T is the least expensive, followed by the R/T Plus, the R/T Shaker, the R/T Shaker Plus, the T/A and the T/A Plus. That could change once 2017 pricing is announced for the entire lineup, but I expect that the hierarchy will be the same.

2017 Dodge Challenger with the 6.4L Hemi
With the addition of the new T/A package, the 6.4L/392 cubic inch Hemi will likely be offered in four trimlines – R/T Scat Pack, 392 Hemi Scat Pack Shaker, T/A 392 and SRT 392. Provided that there is no power increase for 2017 (and I don’t expect one considering that the T/A 392 was introduced with the same 485hp as 2016 models), all of these models will offer 485 horsepower and 475lb-ft of torque and the buyer’s choice of the standard 6-speed manual transmission or the 8-speed automatic.

So, in short, it seems like Dodge isn’t killing off any of the 2016 Challenger trimlines for 2017, while adding the three new T/A packages for the most elaborate lineup in the muscle car segment. Click here for an in-depth look at the 2017 Challenger T/A!

Once all of the official pricing and details have been announced for the 2017 Dodge Challenger, you will be sure to find it here on TorqueNews.com.