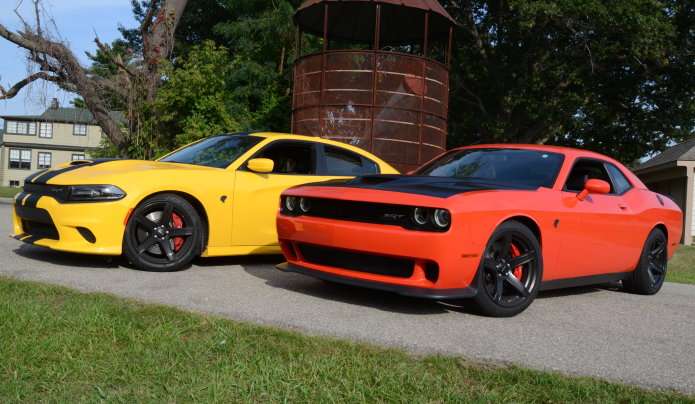 If you have a Dodge Challenger SRT Hellcat or a Dodge Charger SRT Hellcat and you would like to have your supercharged Mopar muscle car beefed up by one of the biggest names in the history of American motorsports, Petty’s Garage can increase the output up over a thousand horsepower.
Advertisement

Richard Petty is best known for his successful career as a NASCAR driver, winning hundreds of races and seven championships – many of which came in a Dodge or Plymouth race car – but more recently, he has launched Petty’s Garage. This is his tuning division, offering high performance packages for the Ford Mustang, the Ford F150 and the Dodge Challenger, with the newest products from the Petty’s Garage being the high performance packages for the Dodge Hellcat cars.

Petty’s Garage Hellcat Packages
Petty’s Garage has announced three performance packages, with power levels of 825, 900 and 1000 horsepower – although the potential of the 1,000hp package seems to leave plenty on the table to make even more power from the Petty-built Dodge Challenger or Charger.

The 825 horsepower package for the Hellcat Challenger or Charger includes a “pulley kit”, a Diablosport Trinity tuning device, upgraded fuel injectors, upgraded spark plugs and a custom engine tune, all for $2,995.

The 900 horsepower for the Dodge Hellcat cars begins with the pulley kit, the Diablosport Trinity tuning device, the injectors and the spark plugs similar to the 825hp package, but the 900hp package adds Kooks long tube headers, ported cylinder heads, a Petty’s Garage camshaft, an ATI 10% overdrive crankshaft pulley and a unique engine tune. This package costs $12,995 and some folks online will be quick to point out that you can get 900 horsepower from a Hellcat Challenger or Charger without getting into a cam swap or ported heads, but this method of adding power is “safer” than just adding more and more boost.

Finally, the 1,000 horsepower Petty’s Garage package for the Dodge Challenger or Charger in Hellcat form includes all of the components from the 900hp package, but the standard 6.2L Hellcat engine block is replaced with one which has been massaged from 378 cubic inches to 426 cubic inches. So, to get to 1,000hp, Petty’s Garage adds a larger engine block, ported cylinder heads, headers, a custom camshaft, upper and lower pulleys, bigger injectors and a tune to the Hellcat Challenger and Charger – a build which costs $18,995.

Now, people who have built Hellcat cars will be quick to point out that you can get to 1,000hp without swapping to a bigger engine block, but there is no question that this method of getting to bigger power is far safer than just adding more boost and more fuel to the stock engine. Getting 1,000hp from this fully built engine will offer more durability since the engine isn’t working as hard as a 6.2L Hellcat Hemi making 1,000hp with lots of extra boost, but just and importantly – this Petty’s Garage 1,000hp Hellcat package leaves plenty of room for more power.

There are a few Hellcat cars on the road with 426 builds and they are all making well over 1,000 horsepower, so while the Petty’s Garage package might “only” lift your Dodge Challenger or Dodge Charger to 1,000hp, that 426 cubic inch engine opens up a whole new world of power possibilities going forward. If Petty is making 1,000hp from a 426 cubic inch Hellcat Hemi with ported heads, a custom camshaft, headers and pulleys, it seems likely that they are not running huge boost – which is supported by the lack of other fuel system upgrades. Beefing up the fuel system and adding more boost to the 426 Hemi would likely make far more power, so when you pay $18,995 for the Petty’s Garage Hellcat package, you are getting 1,000hp, but your Challenger or Charger will have the potential to make far more power.