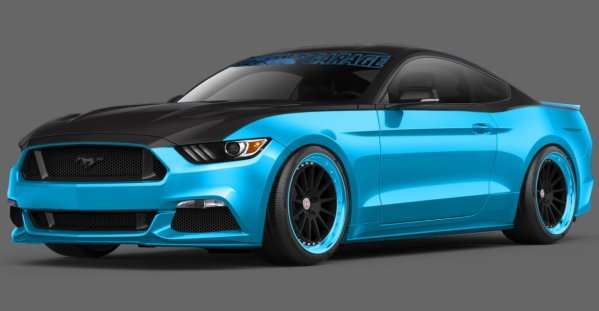 Among the many 2015 Ford Mustang GT fastbacks at the 2014 SEMA Show in Las Vegas was the brilliant blue supercharged muscle car built by the Petty's Garage and, in conjunction with Ford Motor Company, Petty’s team is producing 143 examples of this 627 horsepower beast for sale through your local Ford dealership.
Advertisement

Most of the heavily modified cars at the SEMA Show are either privately owned vehicles, or concept cars built to feature both the vehicle and the aftermarket accessories available for the vehicle. The 2015 Ford Mustang was the bell of the ball at the 2014 SEMA Show and there were a ton of heavily built S550 models on the show floor, but one of the new ponies that drew the most attention was the Petty's Garage Mustang GT. With a striking blue paint combo, a 627 supercharger package and the name of the most famous race car driver in American history, the Petty Mustang was a major attraction.

In fact, the reception for the Petty's Garage 2015 Ford Mustang GT was so great that Ford Motor Company has teamed up with Petty’s team to create 143 examples of the Petty Garage. Best of all, anyone can order a Petty's Garage Mustang GT at their local dealership until all 143 units have been spoken for.

The Petty's Garage Mustang GT Stage 1
The 2015 Petty's Garage Ford Mustang GT comes in two forms – stage 1 and stage 2. Stage 1 begins with a normal 2015 Mustang GT with the 5.0L V8, but instead of 435 horsepower, a Ford Racing/Roush supercharger package increases the output to a 627 horsepower with the help of a cold air intake, a MagnaFlow exhaust system and a custom engine calibration.

On the outside, the Petty's Garage Mustang GT features a unique front fascia, a unique rear fascia with center exit exhaust and a large rear spoiler. There is also a set of Petty's Garage HRE 20 inch wheels wrapped in Continental tires. Inside, the stage 1 kit adds custom embroidered headrests and floor mats, with The King’s signature on the dash.

Stage 2 Brings the SEMA Look
The stage 1 Petty's Garage Mustang GT is available in any of the normal 2015 Mustang GT colors, with all of the unique components painted to match the color of the car. However, if you want your Petty's Garage Mustang GT to look just like the SEMA car, you need to pick the Stage 2 package. This includes all of the engine upgrades, plus a Wilwood brake setup, a set of three-piece forged aluminum HRE wheels and the stunning two tone paint in black and Petty Blue.

They’re Awesome, They’re Rare, They’re Expensive
The Petty's Garage 2015 Mustang GT looks like an incredible package and with just 143 units planned for production – 100 in stage 1 and 43 in stage 2 – they are also incredible rare. They are likely to sell quickly and one of the stage 2 cars has already been purchased by AC/DC’s Brian Johnson.

The stage 1 Petty's Garage Mustang GT starts at $62,210 while the bright blue stage 2 Petty Mustang starts at $92,210, so stage 2 costs $30,000 for a paint job, brakes and wheels. It seems expensive, but considering that you are getting a streetable 2015 Mustang GT with race quality brakes and a 627hp supercharged engine – all with the beautiful blue design of the SEMA car – this is a package that will most certainly sell out quickly. If you have an extra $62k-92k laying around and you want a very unique 2015 Mustang GT with 627hp, head to your local Ford dealership ASAP.