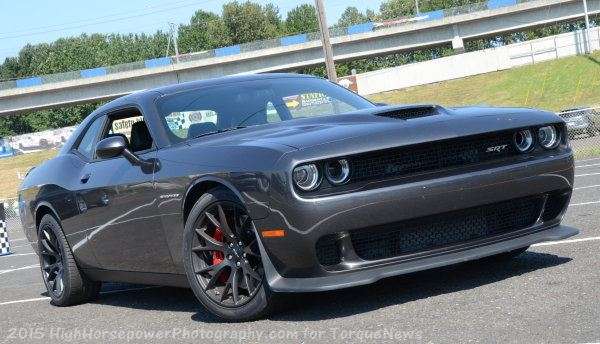 The 2015 Dodge Challenger SRT Hellcat and 2015 Dodge Charger SRT Hellcat are among the most powerful production cars sold in America and with a price starting under $65k, they have proven to be far more popular than initially expected with over 9,000 people placing orders thus far – leading to lengthy delays in delivery that are likely to stretch well into the summer and maybe even into next year.
Advertisement

When the 2015 Dodge Challenger SRT Hellcat was introduced last year, there were quickly rumors that a limited number of these 707 horsepower muscle cars would be built. The Chrysler Group was quick to counter those rumors, stating very clearly that they would sell as many as people will buy. This approach was confirmed again by Dodge brand CEO Tim Kuniskis when the 4-door Charger with the same supercharged Hemi engine was introduced in August. This was great news for those interested in buying a 707 horsepower Challenger or Charger, as the lack of a production limit meant that everyone who wants one will be able to buy one.

Unlimited Production, Amazing Price
The prospective Hellcat buyers were even more excited when they learned that both of these 707hp monsters would start under $65,000, making them far less expensive than the other high powered vehicles sold in the US. Kuniskis and the folks in Auburn Hills knew that these cars were going to sell well, but the reception has been far greater than anyone within the Chrysler Group management team could have predicted. According to Automotive News, there have been over 9,000 orders placed for the Hellcat Challenger and Hellcat Charger at dealerships around the country. If you consider a very conservative average selling price of $65,000, those 9,000 Hellcat cars will translate to $585,000,000 worth of Mopar muscle sold for the 2015 model year.

Selling 9,000 units of anything is great news for an automaker, but selling 9,000 examples of a high performance, high priced machine like the Hellcat Challenger and Charger is unprecedented – mostly because the market has never before seen a car that was so inexpensive yet so powerful. This stunning level of interest has blown away sales expectations and because of that, the company is having a difficult time building them at the high rate at which they are being ordered.

Slow Deliveries Will Continue
The biggest problem for the Chrysler Group is that so many dealerships have accepted orders for the Hellcat Challenger and Hellcat Charger without making it clear that it might be a very long time before the car arrives. Chrysler is building the 707 horsepower muscle cars at their Brampton, Ontario plant as quickly as they can get the superchargers delivered from IHI and mounted onto the 6.2L Hemi for a lengthy engine break-in process.

Chrysler expects that they will only be sending around one Hellcat car to each dealership per month over the next few months, as they work to fulfill the process based on their detailed allocation process. Unfortunately, some dealerships took a great many orders without notifying the buyers that it could be a very long time before they get to drive their new muscle car, and that has some people upset. Even worse, those same people are likely to be waiting for almost a year in the worst case situations where dealerships have taken so many orders that it will be almost impossible to get that many cars any time soon.

The good news is that there are Hellcat Challengers and Chargers headed to dealerships without a buyer waiting for them, so while your local Dodge dealership might not be able to get you a Hellcat car – some careful shopping and deep pockets will allow you to book a flight and buy one tomorrow.

Elon Musk Says Tesla To Offer Car Insurance in Texas Next Month, But These Challenges Exist
Tesla Co-Found Plans To Build a Battery Factory and Shift The Industry
END_OF_DOCUMENT_TOKEN_TO_BE_REPLACED