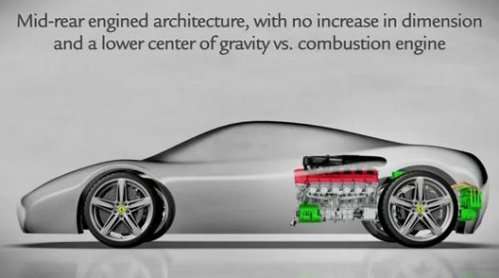 Earlier this week we brought you the video loosely detailing the new Ferrari V12 hybrid drivetrain believed to be destined for the replacement for the range-topping Enzo and it now appears to be official that when the folks from Maranello unleash the evolutionary model of the Enzo (currently believed to be called the F70) it will indeed be the Italian supercar builders first hybrid model.
Advertisement

Ferrari CEO Amedeo Felisa spoke with Automotive News Europe at the Beijing Motor Show this week, explaining that the company will soon employ the HY-KERS gasoline-electric hybrid drivetrain developed for with help from their Formula One program in their new halo car that will take the place in the Ferrari lineup previously held by the Ferrari Enzo. This HY-KERS system will allow the new supercar, which is speculatively referred to as the F70, to consume roughly 40% less than compared to a similarly powered model devoid of the hybrid drivetrain. This hybrid boost will also allegedly help the F70 dash from 0-125mph (200kph) somewhere in the area of three seconds quicker than a traditionally powered Ferrari.

While details of the new V12 HY-KERS midship drivetrain have been slim, rumors suggest that the Ferrari V12 will make 800 horsepower while the HY-KERS hybrid portion of the drivetrain adds an addition 120hp for a total output of 920 horsepower. The down side is that the HY-KERS system ads about 265 pounds to the car but Ferrari engineers plan to eliminate that weight gain by using high tech carbon fiber technology (also borrowed from the Formula One world) to keep the weight low – very low. Estimates suggest that the Ferrari F70 (or whatever the production model is named) could have a curb weight as low as 2,550lbs, which would make the Enzo replacement one of the most powerful vehicles ever sold in the world in terms of power to weight ratio. Click here for more information on the new 2012 HY-KERS drivetrain system.

The lithium ion battery cells for the new Ferrari hybrid supercar will be produced by South Korea's Samsung Electronics, who will send them to Ferrari’s F1 headquarters in Fiorano Italy for final production into the production ready batteries.

Should all of these reports and rumors be true and the Ferrari F70 enter the world as a replacement for the Enzo with a 920 horsepower V12 with the HY-KERS gasoline electric hybrid drivetrain, not only will it be incredible simply for its performance capabilities but the fact that it will be one of the fastest cars in the world with an efficient hybrid drivetrain could help launch hybrid setups into the performance world in greater numbers. Right now, pretty much every hybrid system is designed to optimize fuel economy…often at the sake of performance. The new production-ready Ferrari hybrid system could set the new standard for supercars in terms of performance and efficiency while also shattering conceptions about the lack of performance – real performance – from a hybrid.

Ferrari has been doing lots of things recently to break out of their traditional form such as the incredible Ferrari FF with room for four, four wheel drive and a shooting brake design with added cargo space. It has been expected that, like other automakers, Ferrari will eventually offer a hybrid of their own but it would be a very bold statement to introduced their very first hybrid as their super premium flagship hypercar.

In any case, the Ferrari F70 should arrive sometime in 2013 but with the slow stream of rumors and news; we might know more well before that year rolls around.