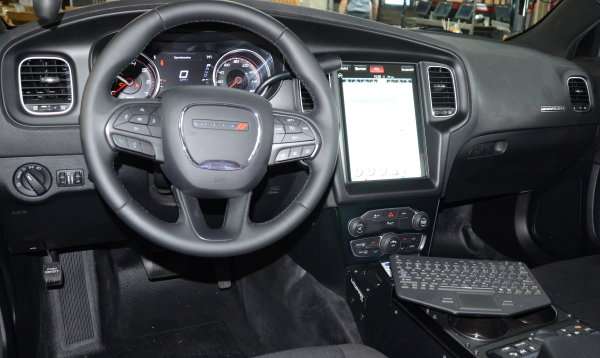 The Next Dodge Charger Could Get a Massive Infotainment Upgrade

Last week, the Chrysler Group showed off the 2016 Dodge Charger Pursuit with a gigantic 12.1 inch infotainment screen mounted in the dash and while that huge touchscreen is currently reserved for the police package – it looks like an ideal addition for the future civilian version.
Advertisement

The Chrysler Group has been on the leading edge of vehicle information technology for a few years now, with their UConnect software gathering all sorts of awards along the way, but when the company introduced the 2016 Dodge Charger Pursuit police car last week, they made it very clear that they have big things coming down the pipeline. This sprawling infotainment screen is currently intended strictly for police vehicle use, but considering how cleanly it fits into the dash and with the constant push to have the hottest technology – I don’t see any reason why the company wouldn’t work this new infotainment technology into civilian Dodge Charger sedans in the coming years.

UConnect 12.1
The current Dodge Charger at your local dealership likely has an 8.4 inch touchscreen mounted high on the dash as part of the UConnect 5.0 infotainment system, but the 2016 Charger Pursuit police car comes with the new UConnect 12.1. This system essentially takes all of the gadgets of the current police cruiser and incorporates them all into one big interface screen mounted in the dash. While UConnect 5.0 is named for its place in the evolution of the technology, UConnect 12.1 is named for its 12.1 inch touch screen – one which is some five times bigger than the 8.4” screen in the current production Charger.

With this massive screen, officers can control all of the same vehicle features that private owners can control from the UConnect screen of the Dodge Charger, such as the radio station, navigation, climate control, the various downloadable apps and the hands-free phone system. In addition to the normal controls, UConnect 12.1 also integrates the controls for the siren, the lights, a front-facing camera and – most notably – all of the features of a traditional laptop. Most modern police cars have a laptop mounted between the front seats so that officers have quick access to online police files and general information needed to do the job. UConnect 12.1 removes the big, bulky laptop stand and puts all of these accessibility into the large screen in the dash.

This system is ideal for police officers, as it clears up some space in the 2016 Dodge Charger Pursuit without removing any of the items that the police need in their cruisers. Many of the UConnect 12.1 features would be useless in a civilian car, but in suggesting that the future production Charger should get the 12.1 touchscreen – I imagine all of the advantages to having this huge infotainment interface in the future Charger Hellcat.

UConnect 12.1 for Civilians
There is a steady push to make the infotainment screens in modern cars bigger and bigger, and the 8.4” display in the current Dodge Charger is one of the biggest units in today’s market. Some companies have gone straight to the plan of literally mounting an iPad or comparable tablet in the dash and while the 12.1 inch Chrysler screen doesn’t go with you when you leave the car, this system has the capabilities to do everything that the current system does while also doing everything that a tablet or laptop does.

With the 12.1 inch UConnect screen, the Dodge Charger Hellcat would be able to display all of the auxiliary gauges of the Performance Pages App on one screen. You would be able to see navigation maps in much greater detail, with information fitting on the large screen while still leaving plenty of space for the map itself. Most importantly, this screen is big enough that you could – in theory – have the SRT screen or the Performance Pages App open while also having either the radio controls or the navigation screen open as well.

Why This Would Work
Aside from the fact that automatic interior technology moves as quickly as any technology segment, there is one key reason why I believe that we could see this 12.1 inch screen in civilian models down the road – it just looks so perfect in the dash of the 2016 Dodge Charger Pursuit.

The team responsible for creating the 2016 Dodge Charger Pursuit did a masterful job of making the larger screen and all of the other essential controls fit and look great on the dash. This couldn’t have been a simple undertaking for the company, as making a screen that is some five times bigger certainly posed some challenges, but the result is a super-clean interior layout that compromises nothing while adding a screen that is just about as big and as impressive as any option on today’s market.