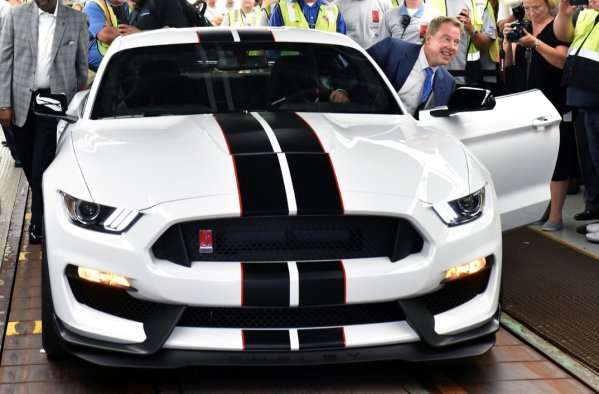 Ford Motor Company announced that late last week, the first 2015 Shelby GT350 Mustang rolled off of the assembly line at the Flat Rock, Michigan facility – meaning that prospective buyers are that much closer to taking home their new road race-ready muscle car.
Advertisement

Since the new Ford Shelby GT350 Mustang was first introduced at the LA Auto Show last year, the performance car world has been eagerly awaiting the arrival of what will almost certainly be the best handling muscle car of all time. Fans and prospective buyers have patiently waited as both the GT350 and GT350R were introduced with a shortage of details, as the Motor Company slowly trickled out the information on the next generation Shelby Mustang. We still don’t know all of the vital information, but with production of the 2015 Shelby Mustang beginning late last week, it won’t be long before we know all that there is to know – or before these new super muscle cars begin showing up at your local dealership.

“This is a special day for all Mustang enthusiasts,” said Bill Ford, executive chairman, Ford Motor Company. “We have taken the GT350 formula to the next level of innovation, style and performance. Today the legend continues.”

The 1st New Shelby
The first 2015 Ford Shelby GT350 Mustang was actually a GT350R, fitted with all of the highest performance goodies available on the new monster muscle car. As you can see in the image above, 2015 GT350R #1 was a gorgeous bright white model with black and red-trimmed stripes, with Ford Motor Company head Bill Ford driving the new Shelby Mustang off of the assembly line.

Like all new GT350R Mustangs, this car is fitted with the new 5.2L flat plane V8 that delivers 526 horsepower and 429lb-ft of torque to the rear wheels via a 6-speed manual transmission. Every new Shelby Mustang also includes the high tech floating brake caliper systems in the front and rear, the MangeRide damper system, the specially tuned suspension setup and the high performance suspension system – all of which work together via the drive mode system.

I have had the pleasure of riding in a new Shelby GT350R Mustang and I can state without question that it is the best handling factory-stock muscle car that I’ve ridden in with an expert handling the driving duties. Click here for a closer look at my ride along videos in the GT350R.

Based on these prices, the new Shelby GT350 Mustang lineup will be a smokin’ deal for a set of cars that will comfortably outrun far more expensive cars on some of the world’s most intricate road courses.