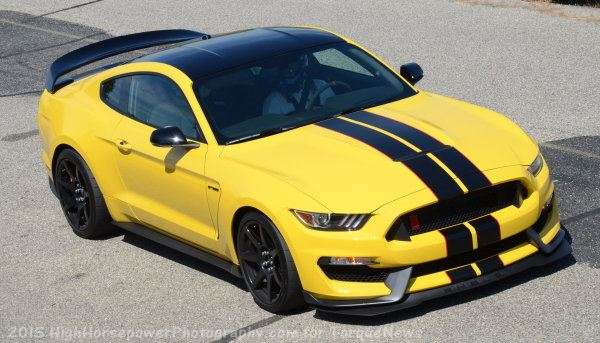 Ford Motor Company announced yesterday that the 2015 Shelby GT350R Mustang weighs just 3,650lbs, making it lighter than the Chevrolet Camaro Z28 and more importantly, the GT350R was able to lap Grattan Raceway a full second quicker than the Z28.
Advertisement

If you are not familiar with Grattan Raceway, it is a 2-mile road course located on the west side of Michigan and its location relative to Detroit makes it a popular testing facility for Ford, General Motors and the Chrysler Group. The 2015 Ford Shelby GT350 and GT350R Mustangs both spent a great deal of time ay Grattan during the development stages so it made perfect sense when Ford invited a small group of writers out to the track yesterday for the first chance to ride in the new Shelby Mustang while being pushed to the limit in a safe environment.

While I will go into more detail on my first ride in the 2015 Shelby GT350R Mustang in the coming days, Ford Motor Company offered us a few more key tidbits of information on what could be the best handling muscle car ever – and based on this new information, the claim of being the best handling muscle car ever is looking more and more likely every day.

Shelby GT350R Weight
The first bit of news on the 2015 Shelby GT350R Mustang announced yesterday was the curb weight and at 3,650 pounds, the new Shelby R isn’t the lightest Mustang ever, but it is lighter than the 2015 Camaro Z28 by around 170 pounds (Z28 weighs 3,820). Ford still hasn’t offered a detailed breakdown of weight loss, but they have pointed out some key features which have helped cut the pounds, such as the industry first carbon fiber wheels.

Any weight reduction from a track car will help if get around the track faster, but the fact that Ford was able to cut significant amounts of weight from the wheels not only reduces weight, but it also makes the car more nimble in the corners while allowing the engine to put more power to the ground. This means that when compared to the same car with an aluminum wheel design, the GT350R offers great wheel horsepower since the wheels take less effort to turn while less weight on the corners allows the MagnaRide suspension setup to do its thing.

The weight difference when compared to the 2015 Camaro Z28 is a big deal, but the even bigger news came next – as Ford announced that the GT350R was faster around Grattan than both the Camaro Z28 and the Porsche 911 GT3 RS.

GT350R VS Z28, 911 at Grattan
I should start by pointing out that Ford didn’t actually tell us what times the 2015 Shelby GT350R turned at Grattan and in searching around the internet, I was unable to find the record time for the Camaro Z28 at the Michigan road course. I did find that the Camaro ZL1 made it around the 2 mile course in 1:27.95 seconds and while the Z28 should turn a far better lap time than the supercharged sibling, that 1:27 time at least gives us an idea of the range of times run. I also found that the official track record at Grattan was set by the Dodge Viper SRT10 ACR, which ran a 1:22 while the C6 Corvette ZR1 ran a 1:24 lap.

So we know that the Z28 is quicker than the ZL1 and we know that the ZL1 ran a 1:27 lap. We also know that if the GT350R had beaten the Corvette ZR1 or the Viper ACR, Ford certainly would have announced that as well – but they didn’t, so that leads me to believe that the GT350R lapped Grattan somewhere in the 1:25-1:26 range.

We should find out the official numbers soon, but what we know is that the 2015 Ford Shelby GT350R Mustang lapped Grattan a second faster than the Camaro Z28 and it even beat the best time by the Porsche 911 GT3 RS by a tenth of a second. For those who are unfamiliar with the Porsche lineup, the GT3 RS is their answer to a street legal track car and while this German beast costs over $131,000, the $64k Mustang still bested it at Grattan.

Beating the Camaro Z28 makes the new Ford Shelby GT350R Mustang the best-handling muscle car ever, but beating the Porsche 911 GT3 RS puts the new Shelby Mustang among the best handling road cars in the world – justifiably killing all of the trash talk about how American muscle cars can’t take a corner. Of course, the GT350R will have to prove its mettle at other tracks, but with Grattan being a popular test track for the Big 3 - this is a big first step for the new Shelby Mustang.

Stay tuned to TorqueNews for my first ride review of the Shelby GT350R Mustang later this week!

Toyota's First EV Will Have a Name of BZ: Toyota BZ
First Videos From Inside The Boring Company's Las Vegas Loop
END_OF_DOCUMENT_TOKEN_TO_BE_REPLACED