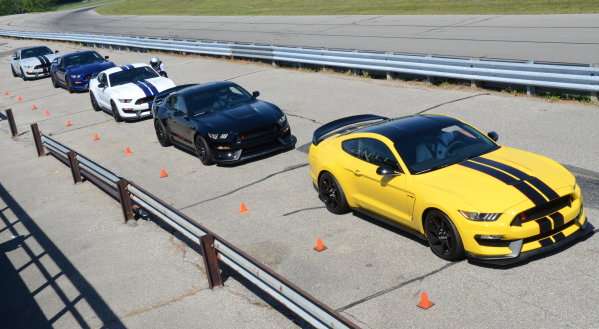 One Ride in the GT350R Mustang Proves Its Place Among Supercars

The 2015 Ford Shelby GT350R Mustang has been heavily hyped since first being introduced earlier this year at the Detroit Auto Show, but having had my first chance to go for a high speed ride in the most track capable Mustang ever – I can say without question that this new Shelby is every bit as good as Ford has led us to believe.
Advertisement

The 2015 Ford Shelby GT350R Mustang is 100% street legal, but it was designed to be the most track capable road-going Mustang of all time. To show off just how great the GT350R is on the track, the team responsible for creating this beast invited a small group of journalists to Grattan Raceway in Michigan this week for a chance to ride along with the same test drivers who did the majority of the testing – and some of the engineering/design process – with the newest race-ready Mustang.

Grattan Raceway
If you are not familiar with Grattan Raceway, it is located in western Michigan and it is a regular testing ground for all of the American automakers, as well as a variety of publications and the Michigan State Police. Grattan is two miles long, featuring a long, fast front straightaway and a series of turns combined with quick changes in elevation that require a great deal of braking to keep the car on the ground, while getting off the ground can leave the car bouncing right as the car needs into the next turn.

Well, that is the problem with most cars, anyway, but the Ford Shelby GT350R Mustang handled every aspect of Grattan beautifully and having had the pleasure to drive in a variety of incredible, high performance cars which rocked the road course – I have to rank the GT350R as one of the best.

A Remarkable Ride Along Experience
When I arrived to Grattan Raceway earlier this week, I was met with a host of new Shelby GT350 and GT350R Mustangs to check out, as well as the new GT350R-C race car. The GT350 and GT350R-C were just there for us to look at and, in the case of the GT350 road car, sit in and check out the interior. On the other hand, the five GT350R Mustangs lined up on Grattan’s pit road weren’t there to look pretty – they were there to be pushed to their absolute limits by the guys who know these cars on this track best.

The drivers for our first ride along in the 2015 Shelby GT350R Mustang were the guys who had worked on the on-track development and not only do these guys know the GT350R and Grattan – but they all know their way around a road course. These aren’t professional race car drivers, but they are the guys who perfect the cars before the pro racers take their turn. These guys know how to handle the GT350R on Grattan because they were involved with the development process of this car on this track.

Our ride began on pit road, where the Ford team member explained to us how the ride along in the GT350R would work. The driver eased out onto the track about midway through the front straightaway, babying the car through the first few turns as he heated the tires up – but as we entered the final turns of the track, the flipped the switch for Track Mode and the real fun was about to begin.

As we rocketed through the final few turns of Grattan during our “pace lap”, I could feel the incredible G’s being sustained as the driver was able to confidently power through the corners. From the passenger seat, at no point did it feel like the GT350R wanted to understeer, even as the driver accelerated coming out of the turns. Shy of the occasional slip of the rear wheels – which were quickly calmed with brief lift in power – the Shelby GT350R rushed through every turn hard enough to pin you to the side bolsters of the Recaro seats. While moving from corner to corner in the tight latter portion of the Grattan surface, there was absolutely no body roll, as the suspension adjusted to provide perfect support as the driver weaved through the curves.

Even when the GT350R hit one of the late-lap “jumps”, which can stretch the suspension systems of normal cars and leave the driver struggling for control upon landing, the MagnaRide suspension system of the new GT350R would allow the dampers to extend to the ground as the car nearly left the surface, but it quickly readjusted those dampers in an instant to make the upcoming corner a breeze.

As we entered the long front straight, I was able to experience my first high speed blast in the 2015 Ford Shelby GT350R mustang, with the flat plane V8 providing a stunning soundtrack to the high speed romp. I could see how fast the GT350R was going down the straight away, but as you can see in my video below, we blasted past the timing tower in a serious hurry.

Also, when we neared the end of Grattan’s long straightaway, I found myself planning where I would begin braking based on my own experiences on road courses around the country. However, the Ford team member behind the wheel drove much, much deeper into the turn than I had expected and the massive, GT350R-exclusive braking system brought the Mustang down to a speed which allowed it to zip through the first hard turn very smoothly – only to hurriedly move out of that turn, building speed as the driver continued to navigate Grattan in the GT350R like a skilled surgeon with his blade.

Throughout the track over the next two laps, the new Shelby GT350R was pushed continually harder through each turn and over each rise – and in every situation, the MagnaRide suspension, the tires developed for this car and the high tech braking setup allowed the GT350R to get around the track in remarkable fashion.

The Muscle Car to Compete with Supercars
While Ford Motor Company hasn’t announced any official track numbers thus far for the 2015 Shelby GT350R Mustang, they have stated that it was 1 tenth of a second quicker around Grattan than the Porsche 911 GT3 RS while beating the Camaro Z28 by more than a second. I have not ridden in either of those cars with a pro driver on a closed circuit road course, but I have ridden in a handful of other ultra-high performance supercars – including the Dodge Viper TA and the Lexus LFA.

While I am not implying that the GT350R Mustang would run comparable lap times as the Viper TA and the LFA when they all have comparably skilled drivers, those are the only two cars I’ve ever been in that stuck to the ground at high speed like the GT350R Mustang. However, the 911 GT3 RS can make short work of some very high priced supercars and with the new Shelby Mustang besting the GT3 RS – it should also be able to beat some of the other European supercars.

The 2015 Ford Shelby GT350R Mustang shatters every misconception that all American muscle cars are nothing but straight line machines and it does so as well as any car under $100k that Ive ever been in.

The new GT350R Mustang is nothing short of a remarkable case of the American automakers proving that they truly can dominate in every form of motorsports with their street legal vehicles.

Before there are a few videos showing my ride along sessions in the Shelby GT350R Mustang, with the sweet soundtrack of the flat plane V8 through the dual mode exhaust. Crank up your speakers and enjoy!

Toyota's First EV Will Have a Name of BZ: Toyota BZ
First Videos From Inside The Boring Company's Las Vegas Loop
END_OF_DOCUMENT_TOKEN_TO_BE_REPLACED