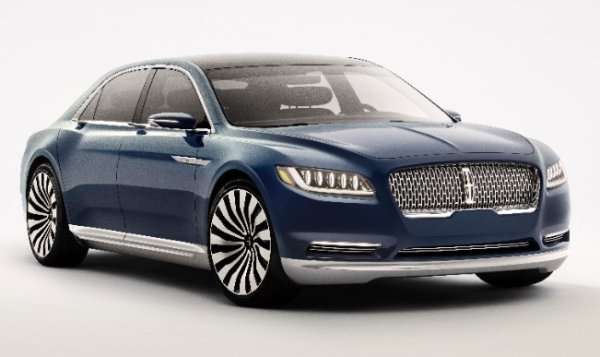 This morning, the new Lincoln Continental Concept debuted ahead of its grand introduction at the 2015 New York International Auto Show – previewing what will be Ford Motor Company’s next super sedan arriving in dealerships next year.
Advertisement

There was a point in American automotive history where the Lincoln Continental was THE luxury sedan to have if you wanted to show off your wealth and style. However, the mighty Continental was removed from the lineup in 2003 amidst a shift in the brand’s direction and naming approach. At that point, front wheel drive was all the rage and with so many consumers looking for front-drive models, the antiquated Continental was axed after 2002. However, rear wheel drive vehicles have seen a resurgence in popularity – particularly among the luxury brands – so the arrival of this new Lincoln Continental Concept comes as the perfect time.

We should remind you that the beautiful car that you see here, which will make its formal debut later this week at the New York Auto Show, is only a concept right now, but this car previews the new Lincoln Continental that will reach showrooms some time in 2016.

The Continental Concept Exterior
The new Lincoln Continental Concept is a large sedan and it is beautiful from front to back. While the car has some bold, muscular lines over the wheel openings, there is no mistaking the Continental as anything aside from a premium luxury sedan. The proportions look a bit unique, with a very centered passenger compartment behind the long hood and wide c-pillar. There is also a massive wheelbase, which gives it a limousine look from the sides while also allowing for a gigantic interior space – but we will get to that in a minute. As is practically required from a modern luxury car, the Continental has high tech LED-trimmed, multi-lens headlights with similar LED-style fog lights mounted down below. In the middle of the new Continental’s face is a big, bold, and chromed out grille that serves as a perfect centerpiece for the front end. With the added chrome accents in the lower grille openings and along the chin area of the front fascia, this new front end is remarkably good looking in every way. Best of all, everything about this front end appears to be production friendly.

Along the sides, the new Lincoln Continental Concept has a sprawling wheelbase, a long roofline and a low, flat-ish profile that harkens back to the old school Continental sedans. While there is some chrome along the rockers and some more around the windows, the side view is somewhat understated, with electronic pop-up handles molded seamlessly into the upper portion of the doors. The high, accentuated wheel openings add a touch of sporty style to the side of the Continental, while the overall flow from front to rear looks more like something that we would see from Bentley or Rolls Royce rather than Ford Motor Company. The Concept wears a set of wheels that are great looking, but they look a little too concept-only for my liking, so I don’t expect to see these wheels on the car when the Continental reaches production next year. Hopefully I am wrong on that front. The back end of the new Lincoln Continental Concept has a huge LED tail light running from one side to the other of the wide, sporty rear fascia. Quad exhaust tips mounted in the chrome lower fascia trim finishes off the minimally decorated rear end, serving as a fitting finish to this great looking luxury sedan.

Interior Redefines American Luxury
While the outside of the new Lincoln Continental Concept is a gorgeous look at the future luxury sedan, the interior takes this car to a whole new level. Mind you, this is a concept car designed to catch attention at the New York Auto Show, but if this interior reaches production in this form – the new Continental will be one of the most luxurious cars sold in the United States.

The long wheelbase and long roofline will yield a tremendous amount of interior space in the new Continental, but it will only seat four people in the lap of luxury thanks to a 2+2 setup. Much like the front seats, the back seats are bucket style with the ability to recline. Both the front and rear seats have cushions designed to conform to the body and the front seats will have an incredible 30 different adjustments to make sure that the driver and front passenger are as comfortable as possible. The rear seats might not have as much adjustability, but they do recline and there are switches to control the passenger’s side front seat to free up more leg room. Oh, the rear seats also have tray tables that rise out of the center console – similar to first class air travel, a champagne cooler and briefcases that are mounted in the back of the front seats. While the interior looks great, I cannot imagine that this layout and these high end features will be standard on every single new Lincoln Continental, as it would make the base price incredibly high.

Parks McCants wrote on March 30, 2015 - 6:49pm Permalink
This old Lincoln fan loves it! Shades of Mercedes S Class baby... I look forward to seeing the unveiling later on in the week. Thanks for the preview Patrick. As always, well done...
Randy wrote on March 31, 2015 - 4:08pm Permalink
You are right, I doubt the wheels will make it. However, I doubt Ford would have taken out those 50 patents on the seats if they weren't going to use them. This car won't be cheap. I do, however, expect the "base" version will have a different rear seat configuration, but I also expect the show car's interior to come in an "executive sedan" edition. Headlights? not currently legal. After examining the interior shots, the central tunnel looks much more Mustang than Fusion or Taurus, leading me to think it may be a modification of that frame (I have heard from an engineer friend that it was designed to be flexible enough to be configured for a full-size vehicle and also configurable for mid-engine use