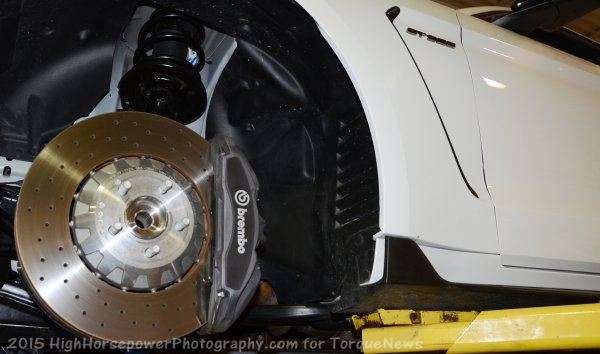 The 2015 Ford Shelby GT350 Mustang is expected to be the best handling Mustang of all time and a big part of the GT350 handling excellence is the high tech braking system – featuring a design that is unlike any American car from any of the Detroit automakers.
Advertisement

This week I had a chance to spend some time at the Ford Performance headquarters, where I got a closer look at the new Shelby GT350 Mustang. While the new Shelby has a collection of unique features that will make it the best handling Mustang of all time, one of the features which the team boasted about the most is the monster brake system…and for good reason. Today, we bring you an in-depth look at the braking system that Ford promises is the best that has ever been fitted up to a Mustang and based on my first impression, this is one of the most impressive braking designs that Ive ever seen.

No Carbon Ceramic Here
The big thing in the high performance braking world right now is a carbon ceramic rotor setup and that is what is found on the likes of the Chevrolet Camaro Z/28, the 2015 Chevrolet Corvette Z06 and a great many high end supercars. However, with the 2015 and 2016 Shelby GT350 Mustang, Ford is taking a different approach to world-class stopping abilities.

As you can see, the Ford Shelby GT350 Mustang uses a two-piece brake rotor design, but this two-piece design is unlike the design used on most other American performance cars. Like other designs, the GT350 brake rotor has a center “hat” comprised of lightweight aluminum while the outer braking surface is cross-drilled steel. Where the GT350 brakes differ rests in how the inner hat and the braking surface are connected. Typically, the outer portion of the disc is connected directly to the inner hat, but on the new Shelby Mustang, the outer braking portion isn’t actually connected to the hat. Instead, the braking surface rides on a series of pins which are cast into the aluminum hat with a gap between the two pieces of metal. If you look at the image above, part of the rotor has been cut and pulled away to show one of the pins.

Superior Thermal Management
The key advantage to having this pinned rotor setup is in how it handles the massive amounts of heat that can be generated during extended track times in the new Shelby GT350 Mustang.

First and foremost, when steel is exposed to extreme heat, it expands and on a conventional brake rotor on your average non-performance vehicle, that expansion causes the braking surface to warp. This warping is so minimal that we cannot see it with the naked eye, but over time, this is why a poorly maintained braking system on a daily driven vehicle need to be cut or replaced, as the warping gradually becomes permanent. Also, this warping can cause decreased braking performance when racing, as the pads and rotors don’t make as good of contact when the rotor warps. With the GT350 pin rotor setup, when the braking surface reaches these extreme temperatures, it can actually expand along those pins and fill the gap a bit. This room to expand prevents the microscopic warping of the braking surface, so these brakes will last longer (under normal driving circumstances) while also preventing that warping, so performance levels are better over long periods of track time.

Also, this pinned rotor system helps to keep some of the heat in the braking surface of the new Ford Shelby GT350 Mustang. With a traditional rotor design where the brake surface is connected directly to the center hat, heat from the braking surface transfers into the hat and from there, it transfers into the hub assembly of the vehicle. The problem with that is when racing, extended periods of high heat can cause premature wear to the wheel bearings so this braking setup helps prolong the life of the wheel bearings. Finally, to help with the cooling process of the massive 15 inch front rotors, the air around the front brakes is fed through the large outer opening in the lower front fascia. From there, the GT350 front rotors use curved, directional fins to draw more air into the rotor than a traditional vented rotor with flat fins.

Fixed Front Calipers
While the high tech brake rotors are the star of the GT350 Mustang braking show, the monster Brembo calipers are the other key part of the stopping equation. Up front, the GT350 has gigantic 6-piston calipers that are fixed to the suspension for more positive, responsive braking in any situation. This fixed system is common in the supercar world, with the likes of the Dodge Viper, Corvette Z06 and any modern Lamborghini using this caliper design. Out back, there is a 4-piston setup with a more traditional floating design, but unique to the new Shelby Mustang is a new in-hat parking brake system that you will not find on the new Mustang GT. When you take into account the high tech rotors, the ample cooling systems and the huge calipers in the front and rear, it comes as no surprise that the Ford test engineers state that the 2015 GT350 Mustang will have more stopping force than any Mustang in the past. There is also a good chance that the GT350 could be the best stopping muscle car of all time, but Ford will have to prove that in the real world.

Parks McCants wrote on May 6, 2015 - 2:10pm Permalink
High tech! Fantastic...
Mark W wrote on June 16, 2015 - 8:56pm Permalink
Naa - I don't buy it. You are not going to outperform a ceramic brake rotor with these big old heavy paperweights. A good test: put these on a table side by side with a ceramic rotor and pick them up. You would be startled. I was the first time I compared equivalent sized rotors. Big heavy masses of unsprung weight. No thanks. As for fade? No Comparo. Hot wheel bearings? When was the last (or first) time I have ever seen that happen on a track car? Please. Stop dreaming up fake reasons for why these are better than ceramic rotors because they are not. At the end of the day they are cheaper case closed.
Joakim wrote on November 19, 2015 - 11:01am Permalink
Ceramic brakes are fun until you have to replace them, you better have some deep pockets...