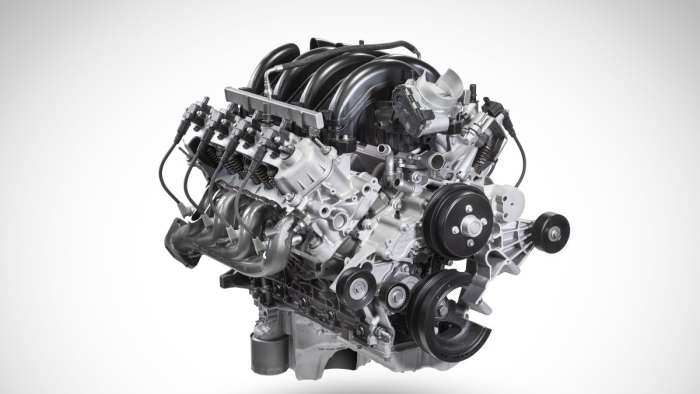 Ford introduced a new 7.3-liter gasoline V8 for the 2020 Super Duty lineup, but the fact that this new pushrod engine would fit in both the current Mustang and F-150 brings about some interesting possibilities – including the V8-powered Raptor that so many people want.
Advertisement

When Ford Motor Company introduced the refreshed 2020 Super Duty lineup at the Chicago Auto Show, the biggest change was the introduction of a new 7.3-liter gasoline V8 engine. The automaker introduced this new mill as an alternative to the base-level 6.2-liter V8, offering a bit more power than the 6.2 while likely carrying a considerably smaller price tag compared to the PowerStroke diesel V8.

This is great news for Super Duty buyers who need more power and who want a gasoline engine, but there could be more interesting uses for the new 7.3-liter V8. While speaking with Motor Authority, Ford representative Mike Levine pointed out that the new 7.3-liter V8 will physically fit in the engine bay of the current Mustang and the current F-150.

In other words, there is a possibility – albeit a small one – that this engine could bring about the return of the V8 Raptor or it could become the biggest engine ever offered in the mighty Mustang.

V8 Raptor
During the first generation of the Ford Raptor, it was offered with a uniquely-tuned version of the 6.2-liter V8 that is still being used in the Super Duty lineup today. The version used in the Raptor was tuned to make more power on the big end, offering quite a bit more horsepower and a touch more torque than the Super Duty version.

Ford hasn’t stated how much power the 7.3-liter V8 will offer, but the company pointed out that it is expected to be the most powerful engine in the segment. This means that it will out-power the 6.4-liter Hemi in the Ram HD lineup, which packs 410 horsepower and 429 lb-ft of torque, but with the Ford 6.2-liter V8 offering 385 horsepower and 430 lb-ft of torque, it seems likely that the 7.3 will have considerably more power.

Something in the range of 450 horsepower and 500 lb-ft of torque would make for a great step up over the 6.2, but for the Raptor, the engine would be tuned to make more horsepower at higher RPM. As a result, the Raptor version – in theory – could see specs like 500 horsepower and 550 lb-ft of torque. Those numbers would make for a stronger Raptor compared to the EcoBoost, while also coming with the V8 sound that so many buyers want.

Big Block Mustang
Sure, by traditional standards, the 7.3-liter V8 in the 2020 Super Duty might not be a big block V8, but it is similarly-sized to the classic big block engines. If the Motor Company actually put this mill in a Mustang, it would be the biggest Mustang engine ever. The biggest engine ever offered in the Mustang from the factory was the 429 Cobra Jet, but Ford hasn’t offered an engine in the Mustang that measured more than 400 cubic inches since the early 1970s.

As for power, figure that the current F-150 and the current Mustang GT share the 5.0-liter V8, but in much the same way that the 6.2-liter V8 is tuned differently between the F-150 and the Super Duty, the Raptor and Mustang engines would be tuned differently. This would likely lead to a jump in horsepower and a dip in torque, so a Raptor engine with 500 horsepower and 550 lb-ft of torque could see those numbers flipped for the Mustang. At 550 horsepower and 500 lb-ft of torque, the 7.3-liter V8 would make for an interesting nostalgia package with a bit more power than the 5.0-liter V8, while still leaving plenty of space below the GT500.

The problem with the Mustang idea is that the Super Duty engine has an iron block, so it would be way too heavy for the pony car, but if the company produced an aluminum version for the Raptor, it would make for an interest Mustang engine as well. Fuel economy would likely be terrible and the package would likely be expensive compared to the Mustang GT, but few things would make for a more unique one-off package than a pony car with a 7.3-liter V8 engine utilizing pushrod technology.

Greg wrote on February 12, 2019 - 7:57am Permalink
Only interesting for weirdos. If Ford actually wanted to top 700 hp in a super car, they could simply add another half-to-three-quarter liter to the current 3.5L twin turbo and have a much lighter and capable Hell-cat performance like engine; pipe in sound; or just add a super charger or turbo charger to the 5.0L. Much easier than another version of this 7.3L that's an aluminum block. Muscle car fanatics are not exactly market drivers in the whole scheme of things. It's not as if Dodge muscle cars have saved FCA or destroyed the sales numbers of Mustang. Ford actually sales tons of Mustangs with the 2.3L turbo with up to 31 mpg highway. Ram trucks and Jeep are the flag ships and profit winners for FCA; not their Dodge muscle cars; and none of those Jeeps or Ram models are particularly fast compared to their competition, yet they're kicking butt in the market.
DeanMcManis wrote on February 13, 2019 - 2:02am Permalink
I agree with all of your points, but even though both Chevy and Ford have far superior drivetrain technology for their ponycars, the Challenger and Charger are regularly stealing headlines with their Demon, and Redeye Hellcat monsters. I think that Ford is smartly choosing a performance target that looks towards tomorrow more than yesterday. One problem with Dodge's damn-the-torpedos, musclecar and SUV, gas guzzler approach is that Fiat Chrysler Automobiles paid $77 million in U.S. civil penalties late last year due to its failure to adhere to 2016 model year fuel economy requirements.
gregsfc wrote on February 20, 2019 - 6:25am Permalink
Wow! Didn't know that...I think it odd and surprising that magically, FCA was able to achieve 3 more mpg in the city estimate by simply adding a bolt-on, old-technology, starter-generator, torque-add-via-the-serpentine-belt system to the 3.6L Penstar w/8-speed; now matching Ford's 3.3L V6 in F150 and beating Chevy's turbo 4. Additionally, bolting on a slightly more powerful version in the optional Hemi, they were able to go from third worst power train mpg (behind the two Tundra V8s); both equally as gas guzzly in the old and new designed trucks, to matching the EPA esimtate in F150 and Silverado mpg. The reason I think this improvement is so odd is that I have a 2007 Saturn Aura GreenLine Hybrid that is exactly like their product technologically speaking except for the battery type and voltage (mine is a 36 volt with nickel hydride; FCA's is a 48 volt, lithium ion). My Saturn 2.4L Ecotec with this 36 volt system does not improve mpg significantly, either estimated or real world beyond what a typical 4 cylinder mid-size car achieves; estimate 25/33/28 (revised in 2008); and real world 29. What it is, however, is extremely reliable and much, much quicker and seamless as a start-stop system; that a traditional type like my F150 that uses the regular battery and an auxiliary pump mounted on the transmission to keep it in gear while shut off. To be fair, however, there are many folks justifiably just as skeptical of Ecoboost real-world mpg just as one might be of a starter-generator hybrid (I own one of each). If you look at all F150s with the 2.7L on Fuelly, the statistical mode is around 19 for most model years; both 1st generation with a six speed and DI and 2nd generation with the 10 speed and dual fuel injection; resulting in only slightly higher than their other three power trains; and equal to the city rating for 4WDs. Conversely, my personal experience with a RCSB XL F150 with the 1st generation 2.7L V6 TT and six speed actually exceeds the combined rating of 19/26/22, as I've averaged 24.1 lifetime, hand calculating and recording more than 80 tanks of gas for 39K miles and 3 1/3 years; and in fact, out of three full size, gas-powered pickups I've owned in my life, my newest turbo charged F150 is the only one of the three that has achieved higher than the combined rating with my driving style and normal routes driven. On Fuelly, me and my truck is an outlier. The only thing I can figure is that it has to do with mine being a very rare RCSB that weighs only 4190 pounds, 3.31 rear axle and 2WD, and the fact that I keep my foot of the gas pedal; and there are probably very few persons that have both of those factors in combination.
DeanMcManis wrote on February 12, 2019 - 11:47am Permalink
It is a cool idea from a muscle car perspective, but I think that it is a reach from a modern production view. In a new world of 4 cylinder Mustangs and Rangers, it seems less likely that Ford would go through the trouble to make an aluminum version of the 7.3L V8 for the Mustang that gets 14MPG. It is more likely that they are going with the Rumored hybrid V8, with 2 electric motors driving the front wheels. The biggest problem with powerful engines is not a lack of horsepower (we have some of the most powerful production engines ever built today), it is putting the power down to the ground to get better performance, rather than burning up your rear tires while you get walked by a less powerful car.