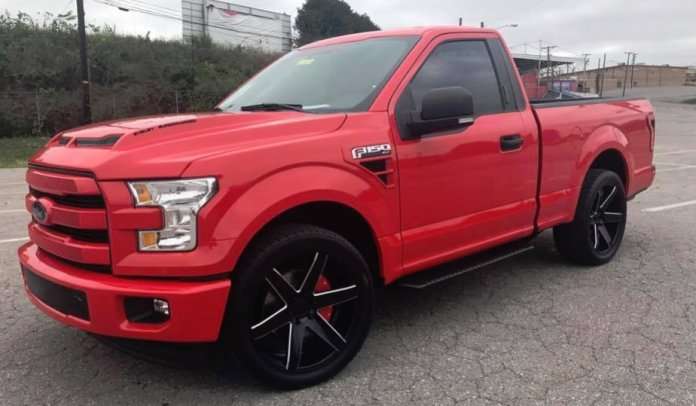 Wyatt Johnson Ford in Nashville has introduced a new high performance package for the F150 called the Outlaw WJ750, packing 750 horsepower with help from Shelby American and carrying a price tag of $74,995.
Advertisement

We previously brought you the news that a Ford dealership in Georgia was offering an F150 Lightning tribute package with 650 horsepower, but if that isn’t enough for you, Wyatt Johnson Ford in Nashville, Tennessee is now offering a unique package with a whopping 750 horsepower and it is called the F150 Outlaw WJ750. Based on what I can find in looking around online, this is the most powerful dealership package for the new Ford F150 and most impressively – it comes with a warranty.

The Ford F150 Outlaw WJ750
The Ford F150 Outlaw WJ750 is specific to Wyatt Johnson Ford in Nashville, Tennessee and it was designed in cooperation with Shelby American. This package utilizes many components of the newest Shelby F150 Super Snake, starting with the engines modifications. The 750hp output is achieved by adding a Shelby supercharger, a larger throttle body, larger fuel injectors, a carbon fiber air intake system and a Borla exhaust system.

Next, the WJ750 F150 has a lowered sport suspension setup`, 22-inch wheels and Nitto high performance tires, so this unique Ford pickup should offer great handling in addition to monster acceleration.

Finally, in addition to the monochromatic exterior, the Ford F150 Outlaw WJ750 wears a custom vented hood to help keep that supercharged engine cooler and well-fed. Buyers can order this 750hp half ton pickup in Race Red, Oxford White, Lightning Blue or Shadow Black, all of which come with black trim from top to bottom for a great sport truck look.

What might be the most surprising aspect of the new Ford F150 Outlaw WJ750 is the fact that it comes with a 3-year, 36,000-mile limited warranty. We don’t know what exactly is limited, but the odds are good that the warranty protects the owner from any component defects. This means that if the supercharger bearings fail, it would be covered under warranty, but if you blow the motor while running flying miles – it might not be covered.