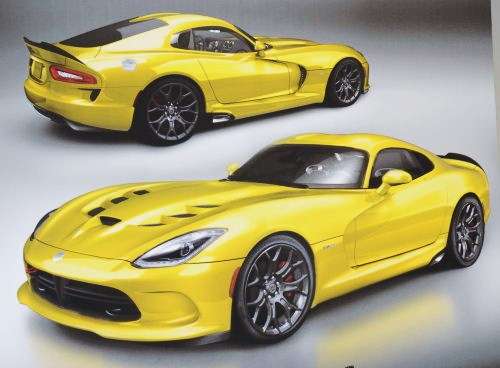 Mopar had an event this morning to show off a few of the modified vehicles that will line the massive display at the upcoming 2012 SEMA Show but among the most interesting vehicles was only shown in pictures with the introduction of the Moparized 2013 SRT Viper.
Advertisement

Considering the massive popularity of the 2013 SRT Viper since being introduced in April, it would probably come as more of a surprise if the Mopar crew didn’t build one up for the 2012 SEMA Show but Mopar fans fear not – there will be at least one example of the new Viper all dressed up for the big show.

The 2013 SRT Viper coming to SEMA is painted a unique metallic yellow with the optional Track Pack hyper black lightweight wheels. Mopar has added a carbon fiber aerodynamics package to improve downforce but they didn’t offer any details as to what this package includes. Based on a comparison between the drawings displayed today and pictures of the production Viper, this aero package looks like it includes a molded rear decklid spoiler and perhaps a more aggressive rear diffuser but we won’t know that for sure until we get to SEMA.

Under the hood, the Mopar Design 2013 SRT Viper wears a cross X brace constructed entirely from carbon fiber which offers a cool look along with being 50% lighter than the brace found on the current production Viper. The Mopar Viper also gets a new engine cover that is made from carbon fiber and aluminum sporting the SRT logo along with an aluminum oil filler cap. Further enhancing the performance that is already aided by the lightweight carbon fiber features, this Mopar Viper gets a Mopar coil spring setup for improve handling performance. This suspension package combined with the natural stance of the new Viper gives the Moparized Viper a low, menacing stance that just screams “incredibly fast”.

Inside, the Moparized 2013 SRT Viper wears a full black interior with yellow accents in the middle of the seats, the outer side of the bolsters, the side piping on the seats, on the HVAC vents, in the door handles and in the dash logo. These Sabelt hard shell seats come complete with 6 point race harnesses while a Mopar billet shift knob, an aluminum Mopar bright pedal kit etched with the Viper logo, and a unique footrest with the Stryker logo bring more uniqueness to the new supercar. An interesting addition to the 2013 Viper by the folks at Mopar is a carbon fiber bulkhead with an integrated quick release mount for a camera like a GoPro to record exciting in-car video. As a GoPro owner and someone who likes taking in-car video footage, I look forward to seeing this feature in person at the SEMA Show as this could definitely become one of those items that debuts at SEMA and moves into the Mopar catalog – especially considering the high number of Viper owners who like racing their car.

The 2013 SRT Viper will most certainly be among the most popular models at the 2012 SEMA Show and considering that production has not yet started – the Mopar crew may be the only display to feature the newest American supercar. One thing is for sure, this Viper will be a head-turner whether there are other new Vipers there or not.