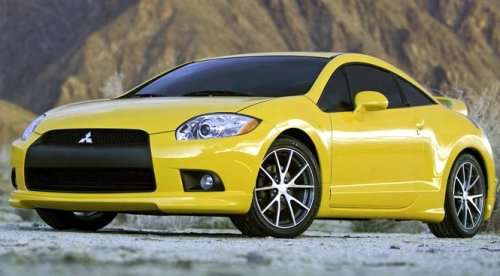 Mitsubishi Motors has been struggling in the US market amidst a frenzy of rumors that some popular models will be getting the axe in the next few years but according to a report by AutoWeek, some of the automakers longest-running models in the US will see an end to production as soon as August.
Advertisement

It looks to be near-official that as of August 2011, the Mitsubishi Eclipse, Eclipse Spyder and the Endeavor SUV will cease production at the company’s facility in Normal, Illinois. In addition to these two models (three if you count the drop-top Eclipse Spyder as its own model), the long-running Mitsubishi Galant will likely also meet its demise in the next year or so with the company decision to be “made later”.

Through the 1990s, the Mitsubishi Eclipse made a name for itself as the dominant force in the booming sport compact segment thanks to a sturdy turbocharged 4-cylinder engine and an all-wheel drive system that afforded the car fantastic acceleration and handling. Whether it is on the drag strip or the off-road rally course, the Mitsubishi Eclipse (and the sibling vehicles, the Plymouth Laser and Eagle Talon) developed an incredible reputation for fairly inexpensive high performance. My winter vehicle is a near-stock 1992 Plymouth Laser RS-T (all wheel drive, turbo, limited slip differential) and along with quarter mile times in the low 14 second range it makes for an unstoppable force in the snow.

Unfortunately, as the Eclipse graduated to its third generation in 1999 the company did away with the turbocharged 4-cylinder engine and the all wheel drive option – relying on a heavier V6 and front wheel drive. When coupled with the increased weight of the 3rd generation Eclipse, the new drivetrain offerings weren’t enough to keep the performance crowd happy and the name slowly faded from the new-car performance limelight - even though the 1st and 2nd generation models continue to be a popular choice for all sorts of auto racing.

The good news for the folks at the Normal, Ill production facility is that the plant will be retooled to produce the Outlander Sport with plans to build as many as 50,000 compact SUVs per year; half of which are intended for export. The bad news is that Mitsubishi has fallen from grace over the past few years and killing off their longest-running vehicles – the vehicles for which the company is best known in the US – may not prove to be a great strategy down the road.