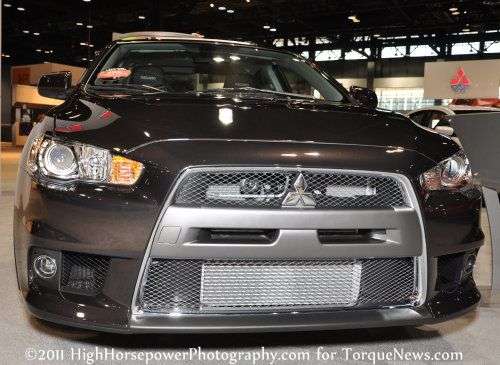 Yesterday, we brought you the news that Mitsubishi was planning on ending the high performance Lancer Evolution line after this model year and this morning, Mitsubishi addressed the future of the Evo on Facebook but sadly, it doesn’t do much to refute the reports of the Evolution X being the last in a long line of high performance vehicles.
Advertisement

After the internet exploded yesterday with the news that Mitsubishi would discontinue the popular performance oriented Lancer Evolution, the Mitsubishi and Evolution communities were abuzz with support for the high performance all wheel drive sedan. One particular venue populated with the cries of the Evo faithful was the official Mitsubishi Lancer Evolution Facebook page, with pages and pages of fans posting their thoughts, concerns and ideas on the future of the Evo.

This morning, Mitsubishi addressed the discussions about the demise of the Evolution with this short, simple comment:
Further to some comments published in the press recently, production of the current Lancer Evolution continues as planned. As for its successor, regulations and market feedback will dictate its engineering package & architecture. Stay tuned.

While the market and Mitsubishi’s direction towards electric vehicles doesn’t seem to offer a very bright future of the high performance Evolution, the massive public outcry from Evo fans from around the world could help the automaker decide how to handle the future of the vehicle. That being said, if you are a fan of the Evo and want to see it live on, posting rational comments on websites like the Mitsubishi Lancer Evolution Facebook page could sway the company. I’m not saying that going to Facebook and demanding that Mitsubishi make an Evolution XI will guarantee that the model will survive but with enough enthusiasm, the company may find a way to keep the Evo in the lineup. Click here for the Mitsubishi Lancer Evolution Facebook page.

TorqueNews.com will continue covering this, bringing you the latest news in the saga of the Lancer Evolution in what could be its final year or production.

Toyota vs Tesla: Which Stock To Buy These Days
For Some Former Daimler Managers Daimler Is Authority, While Tesla Is Like a Startup
END_OF_DOCUMENT_TOKEN_TO_BE_REPLACED