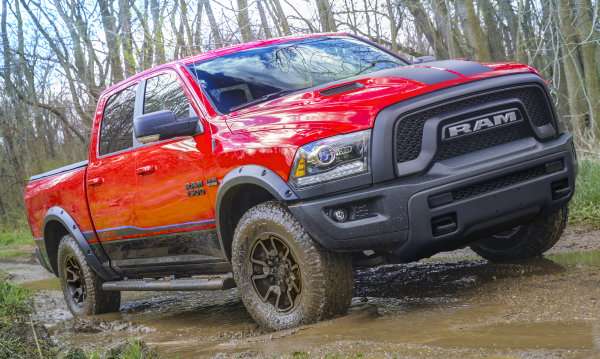 The Ram 1500 Rebel is the newest Moparized vehicle, joining the Dodge Challenger, the Dodge Charger, the Dodge Dart and the Chrysler 300 on the list of vehicles given the factory upgrade treatment, but as has been the case in the past – the Mopar 16 Ram will be limited to just 500 units.
Advertisement

“We are excited to team up with our friends at the Ram Truck brand to offer the first limited-edition Mopar vehicle for full-size truck enthusiasts,” said Pietro Gorlier, Head of Parts and Service (Mopar), FCA – Global. “The already formidable Ram 1500 Rebel is a perfect canvas for unique Mopar accessories and performance parts developed to reinforce the rugged personality of the Rebel.”

The Mopar 16
The Mopar 16 is based on the 2016 Ram 1500 Rebel 4x4 Crew Cab, powered by the 5.7L Hemi V8 and finished in either Flame Red and Brilliant Black or just Brilliant Black. While the Rebel package is already extensively modified over the “normal” Ram 1500, the team at Mopar has added a collection of goodies from the catalog to make this beast even more impressive.

Mopar starts by adding an aluminum power bulge hood with dual intake ports, finished in matte black as well as off-road wheel opening flares and a Mopar stripe that extends down both sides and across the tailgate – also in matte black. Next, Mopar added a front skid plate, 17 inch satin black wheels wrapped in off-road ready rubber, a set of black side step bars, a black Mopar hard folding tonneau cover and a spray-in bedliner - tying in the blacked out treatment from the Rebel’s unique front end and all of the black Mopar additions.

Finally, the Mopar 16 package for the Ram 1500 Rebel adds a unique serial number badge on the dash and a set of bright door sill guards. Also, while not exactly part of the vehicle, the each Mopar 16 will come with an owner’s package that includes Mopar 16 information such as a brochure explaining the uniqueness of the vehicle and a metal “birth certificate” with the build date and serial number – all of which is packaged in a Ram branded box and tool bag.

“The new Ram Rebel has been a solid addition to the Ram lineup, providing customers with a truck that can deliver the added capability that their active lifestyles demand,” said Mike Manley, Head of Ram Brand, FCA – Global. “The Mopar '16 content illustrates how customers can easily personalize a Ram truck with factory backed accessories."

The Mopar 16 is the most expensive Moparized vehicle to date with a price starting at $52,460, but it should be noted that the bulk of that price is the standard cost of the new Ram Rebel. The “regular” Rebel with four wheel drive, the Hemi V8, and some of the standard features of the Mopar package (side steps, bedliner, tonneau, wheels) has an MSRP of $49,160, so the Mopar 16 package really only adds around $3,000 for the features which aren't a part of the normal Ram 1500 option list.

The Mopar 16 Ram Rebel will hit dealerships around the country this summer, but with only 500 units planned for production, these Moparized trucks are bound to go fast. If you want to put one in your driveway or garage, it would be a good idea to contact your local Ram dealership as soon as possible.