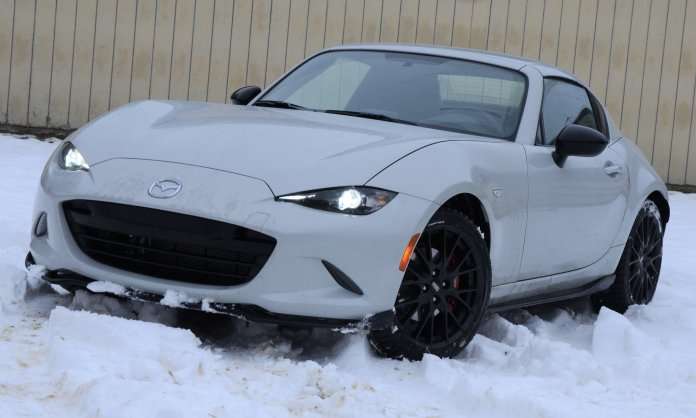 The Mazda MX-5 is Surprisingly Snow-Mobile

I just spent a snowy week with the 2017 Mazda MX-5 and much to my surprise, it is amazingly capable in even very deep snow with a simple set of good snow tires – proving that this can be your only vehicle if you live in an area that gets heavy snowfall.
Advertisement

When I last drove the newest Mazda MX-5, it was at an event in Southern California and I enjoyed the open-air sports car. Sure, it doesn’t pack the big power of the American muscle cars, but it handles like it is on a rail and the standard 2.0L engine does make it a ton of fun to drive. However, we were driving it in perfect conditions for a car like the MX-5.

The MX-5 and the Miata before it are widely known for being fun, compact and affordable sports cars, but like most sports cars, it is believed that the little Mazda roadster can only be enjoyed in warm weather. I mean, who drives a rear-wheel drive convertible in the dead of winter, right?

Well, the folks at Mazda sent me a new MX-5 last week equipped with a set of Blizzak snow tires and as though the Japanese automaker had some control over the weather, the Metro Detroit area got its first big snow storm of this winter. At my house, we got somewhere in the area of 15 inches of snow over the course of two days, allowing me to test the MX-5 in some pretty unpleasant conditions.

To my surprise, the 2017 Mazda MX-5 proved to be an awesome winter car, even when the road surface was buried in several inches of hard-packed snow and ice.

Driving Through the Heart of a Storm
The first morning that I had the 2017 Mazda MX-5, I had to make a 40-mile drive to the FCA Headquarters. When I set out that morning, it had already been snowing for a few hours, so the roads were slick and beginning to turn white, but traction really wasn’t an issue. In most places, the road crews had laid enough salt down that what little snow was piling up on the roadsides was melting off of the main driving surface.

On the other hand, when I left that meeting a few hours later, the full force of the storm had hit the Metro Detroit area. The snow was piling up between the lanes on the highway and surface streets were quickly becoming a mess. Even as the road crews fought the storm with salt and plow trucks, it was falling too fast to prevent the snow from getting very deep in some areas. Traffic came to a near-halt as overzealous drivers exceeded the limits of their all-season tires, littering the sides of the road with vehicles damaged by low-speed fender-benders and leading to even slower-moving traffic.

At times, I found myself in the MX-5 in traffic next to vehicles that couldn’t make it up slight grades in the road, but at no point did the little Mazda hesitate to keep me headed towards home. The 40-mile drive home took more than 2.5 hours and in that time, I saw countless accidents along the way, but the MX-5 couldn’t have performed any better.

While slowly driving through the hard snow and brutally slow traffic, I had a chance to stow the retracting hard-top on the move. I found that when I was going at least 15mph, none of the snow came into the cabin, so for those crazy convertible owners who like to toll around in the snow with the top down – the MX-5 is a great car for that type of driving fun. With the heat cranked up and the car moving slowly, I could barely tell that the top was down.

By the time that I got home, roughly 8-inches of snow had covered the area and the storm continued to pound the area through the night. Come morning, we had somewhere in the area of 15 inches of snow on the ground around my house and while the snow had stopped, the roads were still pretty well coated. Schools were closed for the day, but I had errands to run in the morning, so the MX-5 got an even tougher test. The snow in some places in my area was 6-8 inches deep on the local unpaved roads, but the compact Mazda roadster with Blizzak tires handled everything I threw at it with ease.

During my morning errands that next morning, the roads were relatively empty, so I got to really push the MX-5 to the edge of reasonable limits. In short, I drove the roadster like I would drive a small SUV with AWD, and it never failed to meet the challenge.

MX-5 with Blizzaks on a Nice Day
Thanks to the well-timed snow storm, I was able to test the 2017 Mazda MX-5 with snow tires in ideal conditions, proving that this is absolutely a sports car that someone in the Snow Belt can enjoy all year long. Mind you, I would call the Blizzaks or some other serious snow tire a “must have”, but with them, the MX-5 is fantastic in even very heavy snow.

The “problem” with adding dedicated snow tires is that they are not made for great performance on dry roads, so those folks considering an MX-5 likely wonder how the car drives with the snow tires on nice days. Fortunately, Detroit’s bipolar weather patterns afforded me the option to enjoy the MX-5 on clear, dry roads when the temperature climbed into the 40s a few days after the big snow storm.

While the Blizzak snow tires don’t grip the road as well as the stock tires from the Mazda MX-5, with a bit more wiggle coming from the microsiped tread face, you can still toss this compact roadster around on dry days with the winter rubber. Traction isn’t quite as good on a hard launch or under hard cornering, but the Blizzaks grip well enough in every condition that you can still experience the “Zoom-Zoom” driving fun that MX-5 owners expect when they buy the car.

The Final Word
If you are considering a new Mazda MX-5 for your daily driver, but you live in an area that gets heavy snowfall and you are concerned about needing a second vehicle, making the legendary roadster a great winter car is only a good set of snow tires away. Once equipped with the proper tires, the MX-5 will conquer snow-covered roads during the ugly winter weather while still returning the driving excitement that you want from this small sports car when the roads dry up.

Gary wrote on December 22, 2017 - 8:40pm Permalink
Thanks for the article. I'm planning on buying an RF Club in February and live in Pennsylvania. It is good to know it can handle the snow as I plan on it being a year-round daily driver! I'll have the dealership put some Blizzaks on it.