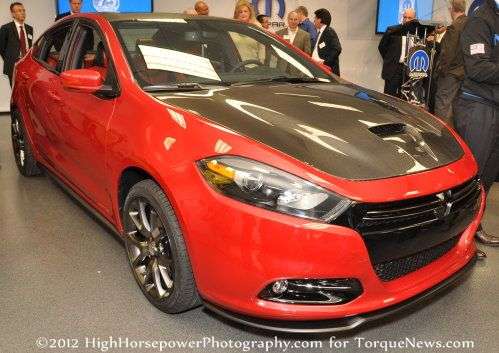 During a recent interview with Automobile Magazine, Chrysler Group and Fiat SpA CEO Sergio Marchionne confirmed that the company is currently a Dodge Dart SRT4 but the Chief Exec did not offer any details on the high performance variant of the new C segment sedan.
Advertisement

There have long been rumors of a pending Dodge Dart SRT4 which have been bolstered by comments from SRT President Ralph Gilles but Sergio Marchionne’s comment to Automobile about the existence of the SRT Dart is the first piece of official information that it is in the works. Marchionne went on to state that "the only thing we're fighting over now is to determine how big an engine we stick in it."

Since even before the 2013 Dodge Dart was unveiled at the 2012 North American International Auto Show in Detroit, Chrysler brand fans and the sport compact world alike have been clamoring for a high performance version of the Dart from the Street and Racing Technology (SRT) division of the Chrysler Group. Chrysler hopes that the new Dart will obtain the level of success that the company saw from the Dodge Neon and one of the features that helped procure the Neon’s place in the automotive performance record books with the Neon SRT4; so it would make good sense for the sporty new Dart to also feature an SRT trimline.

The History of the SRT4
The last 4 cylinder high performance model offered by Chrysler’s SRT division was the Dodge Caliber SRT4, a model that failed to meet the level of success seen by the Dodge Neon SRT4 that came before. The Neon SRT4 was a giant killer of sorts, taking on and beating the likes of the Ford Mustang and Chevrolet Camaro in stock form even though those rear wheel drive muscle cars packed V8 engines. Unfortunately, the awkward Caliber SRT4 fell far short in terms of performance in every way compared to the Neon SRT4 even though the high performance Caliber packed more power.

One of the key components to the success of the Dodge Neon SRT4 offered from 2003 to 2005 was the offering of factory performance packages that came in stages. Dodge dealerships offered stages 1, 2 and 3 – each of which helped to raise the power by significant amounts with the stage 3 kit making over 355 horsepower and 365lb-ft of torque with 100 octane race gas. Based on the popularity of these dealership-offered packages, we would expect to see similar kits for the Dodge Dart SRT when it hits dealerships around the country. Unfortunately, we don’t have any idea when that might be.

The GTS 210 Tribute
The Chrysler Group has already given us a glimpse of what could be with the 2013 Dodge Dart in the form of the Dodge Dart GTS 210 Tribute shown above on the right. This one-off show piece packs Mopar Stage 1 and Stage 2 kits with the first step adding a unique look while the second package adds engine and suspension performance parts. These modifications allowed the Mopar team to increase the output of the 2.4L Tigershark engine from the Dart R/T to 210 horsepower in adding just a cold air intake package, an exhaust system and a performance calibrated engine control unit (ECU).

What engine will power the Dart SRT4?
The 2013 Dodge Dart is available with three different engines starting with a naturally aspirated 2.0L 4-cylinder (160hp, 148lb-ft of torque), followed by a turbocharged 1.4L 4-cylinder (160hp, 184lb-ft of torque) and topped off with the new 2.4L Tigershark 4-cylinder engine (184hp, 171lb-ft of torque). The company has already shown that they can squeeze 210hp out of a naturally aspirated 2.4L Tigershark engine but that isn’t going to be enough for the Dart SRT. The engine that arrives in the Dart SRT will likely pack forced induction and to be taken seriously, the power output would need to be up around the 300 horsepower mark. That seems like a stretch from the 1.4L motor found in the Fiat 500 Abarth and many of the Dart models but the 2.4L Tigershark 4-cylinder mated to a turbocharged may allow this compact engine to make big power while still offering acceptable fuel economy figures.

There is also the far-fetched idea that the Dodge Dart SRT will be an SRT6 and not an SRT4 – which would mean that it would be powered by a six cylinder engine rather than a 4-banger. The Pentastar V6 makes 283 horsepower in the front wheel drive Dodge Avenger and over 300 horsepower in the Dodge Challenger and upcoming Ram 1500. This engine would most certainly put the Dart SRT6 well into the realm of other current production performance models but the size and weight of the V6 engine may alter the weight distribution of the Dart. SRT focuses as much on handling as they do on pure power so the heavier V6 is far less likely than a compact, lightweight 4-cylinder engine with a turbocharger.

We also shouldn’t forget that the SRT-sponsored Dodge Dart rally car driven by Travis Pastrana uses a turbocharged 2.0L engine to make more than 600 horsepower so perhaps there will be a street version of the engine of the Dart rally car used in the upcoming Dart SRT4.

It should go without saying that we will continue to keep our ears to the ground, bringing you any news on the upcoming Dodge Dart SRT4 as it becomes available!

Jesse Hansen wrote on October 29, 2013 - 10:04pm Permalink
I would like to say, i bought the 2013 dodge dart se. 2.0 tigershark mounted to a 6 speed manual transmission. The handling is great. I am very happy with the positioning of all the driver controls. I think the car looks great too. My concern however, is the Engine options. Engine does seem.... not weak but able to do more. I do plan to trade it in when/if an SRT-4 model is available. I believe the multiple engines are a great idea. I bought the car knowing the Ideas and capability's this car has, therefore i bought the car. not the engine. my engine replacement would be around 3K . with this being said, a 30k+ awd SRT-4 2.4 turbo version would be worth limited production. A V-6 however... may be too much.

Toyota's First EV Will Have a Name of BZ: Toyota BZ
First Videos From Inside The Boring Company's Las Vegas Loop
END_OF_DOCUMENT_TOKEN_TO_BE_REPLACED