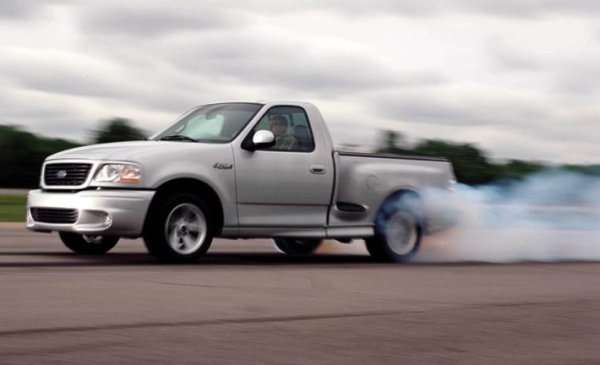 Since the new 2015 Ford F150 was introduced in Detroit with a body that is heavily construction from aluminum, all of the attention has been paid to the fuel economy benefits and the toughness of the materials – but this new lightweight F150 could also account for the most impressive SVT Lightning sport truck ever.
Advertisement

While most folks who buy a modern SVT-prepared Ford F150 are looking to tear up the offroading world with the mighty Raptor, the earlier SVT pickups focused more closely on all-out speed. The Lightning started off as a tuned up version of the F150 in 1992 but from 1999-2004, a supercharged V8 made those SVT Lightning pickup trucks the fastest in the world. Unfortunately, the Lightning program didn’t continue past 2004 and with the newest (current, shown above) generation of the SVT F150 going the offroad route with the Raptor, the Ford sport truck was seemingly gone. There have been plenty of rumors about a new Lightning since then, but never before has the return of the SVT Lightning seemed like such an obvious idea.

The 2015 Ford F150 will have a great many aluminum body panels which when combined with the other weight saving features, should make the 13th generation of the Ford F Series the lightest half ton trucks on the market. This lightweight will allow the new F150 to do more work, to make better use of the available power and to get better fuel economy than any Ford truck in the past – but this new lightweight F150 would also make an incredible performance truck.

Were Ford Motor Company and the SVT Group to take the 6.2L Raptor motor with 411 horsepower and 434lb-ft of torque and install it in a rear wheel drive 2015 F150 RCSB with a curb weight of 4,300-4,400lbs, it would most certainly stomp the old school blown Lightning in a straight line. If Ford would then use similar suspension and braking technology to what they have used in the Mustang over the past few years and apply those goodies to the new SVT F150, it would almost certainly be the best handling Ford truck of all time – if not the best handling half ton truck ever.

What Engine Would Power the 20115 F150 SVT Lightning
The problem is that rumors indicate that the 6.2L V8 that powers the F150 Raptor is about to be discontinued so Ford would have to rely on some other engine to power the new Lightning. Fortunately, the 5.0L V8 that powers the new 2015 Ford Mustang GT is promised to deliver at least 420 horsepower and at least 390lb-ft of torque so with some light tuning from the SVT engineers – the heart of the Mustang GT would make for one nasty sport truck engine. Of course, there is also the possibility that the SVT-designed engine that will power the next generation Shelby Mustang could power the new Lightning and if that was the case, we can expect power figures that will blow away the older supercharged F150s.

Unfortunately, there has been nothing but idle rumors to suggest that there is a new SVT Lightning based on the 2015 Ford F150 on the way. Ford hasn’t offered any indication that there is a new on-road performance truck coming, but the current F150 Tremor sport truck shows that the Motor Company is at least thinking about a new high performance truck for on-road use.

If Ford takes what they learned from the Tremor and combine that with the lightweight construction of the 2015 F150 and the high performance V8 of the new Mustang, the American performance truck market could very well be looking at the best performing half ton truck ever – one that would likely beat the Ram SRT10 that was powered by the Viper V10.

sheldon wrote on June 25, 2014 - 10:30am Permalink
When the first F-150 SVTs came out I enjoyed watching them at Hallett Motor Racing Circuit in OK. This circuit is a techinal on where each turn has very unique properties that challenge the best tuned chassis and most skillful drivers. From eveything I could tell, the truck performed like a sports sedan.
mike zwolski wrote on October 9, 2014 - 2:35pm Permalink
I currently own a 2002 Lightning and have been hanging on for Ford figure out they need to re-invent the svt Lightning. the raptor and tremor are great disappointments
mike zwolski wrote on December 31, 2014 - 2:21pm Permalink
I hope you guys are right. im ready to buy
Jerry wrote on March 2, 2016 - 4:30pm Permalink
Got tired of waiting so I built it myself. Found a 2015 F150 RCSB in Sioux Falls, SD for $24,000 with a 5.0, put a whipple 2.9 supercharger and a 3" to 5" lowering kit.