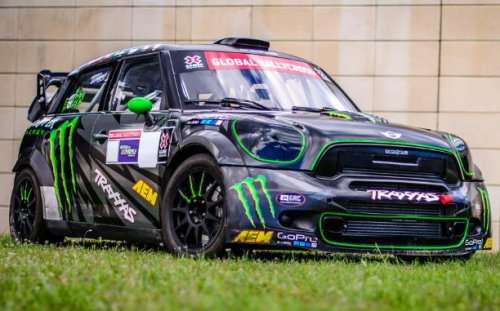 The fifth race of the 2013 Global RallyCross season will take place this Saturday in Bristol Tennessee and after missing the New Hampshire race last week, series front runner Liam Doran will make his America rally debut in the Mini race car that did so well in Munich.
Advertisement

As was the case for last week’s Global RallyCross event at New Hampshire Motor Speedway, thirteen drivers will take to the track in pursuit of a podium spot but Mitsubishi rally fans will be disappointed to see that Nelson Piquet Jr will not pilot the Evolution that has driven at several events this season. Also, Travis Pastrana will once again be skipping a Global RallyCross race in order to avoid conflict with his NASCAR Nationwide ride. As was the case at the Munich double header, Pastrana will be replaced by European RallyCross front runner Timur Timerzyanov.

The biggest news leading up to this weekend’s Global RallyCross race at Bristol Motor Speedway is that Liam Doran will be making his North American debut in his new Mini rallycross car. Doran and his brand new Mini rally car were a dominating duo in Munich, winning the first race and finishing second in the next but the team was a no-show last week in New Hampshire. Even with missing the first event in Brazil and the last event in New Hampshire, Doran sits in the 5th spot in the championship run – 33 points behind series leader Toomas Topi Heikkinen.

The Bristol Global RallyCross race field will be made up of 7 Ford Fiesta race cars from three different teams, three Subaru WRX entries from Subaru Puma RallyCross, two Dodge Darts from Pastrana Racing and the sole Mini from Liam Doran Motorsports. Tanner Foust, Toomas Heikkinen, Brian Deegan and Patrick Sandell will all be racing in a Ford Fiesta built by the OMSE team while Steve Arpin and Scott Speed will compete in the team cars of the OMSE2 group. Ken Block in his Hoonigan Racing Fiesta finishes out the Ford entries for this weekend. As usual, Dave Mirra, Sverre Isachsen and Bucky Lasek will do the driving for the Subaru team cars while Bryce Menzies will join fill-in driver Timur Timerzyanov in the two Dodge Darts.

Provided that things go as well for Liam Doran as they did in Munich, the British racer could challenge the Ford supremacy that we have seen throughout much of this season. In New Hampshire, Fords claimed each of the top 5 spots – a feat which was also achieved when Scott Speed won the first event of the season in Brazil. In the first race in Munich, Ford was only able to grab two out of the top five spots (second and third) when Doran took the win while in the second race in Germany, Ford claimed the first, third and fifth spots with Doran once again preventing Ford from claiming the whole podium. That means that over the course of the first four events, Ford Fiesta drivers have claimed 15 of the 20 available top 5 finishing spots and 10 of the 12 possible podium positions. Oh, and Fords have won three of the four races with only Doran’s win in Munich breaking the Ford shutout for 2013. That’s some domination right there and as a result – Ford has a 104 point lead in the manufacturer’s championship for 2013.

The Bristol Global RallyCross race will air on ESPN this Saturday at 4:30pm Eastern Standard Time. The race may also be available on ESPN3 after the television broadcast is over but if you really want to see the race and you cannot be in front of a TV – make sure to set those DVRs.