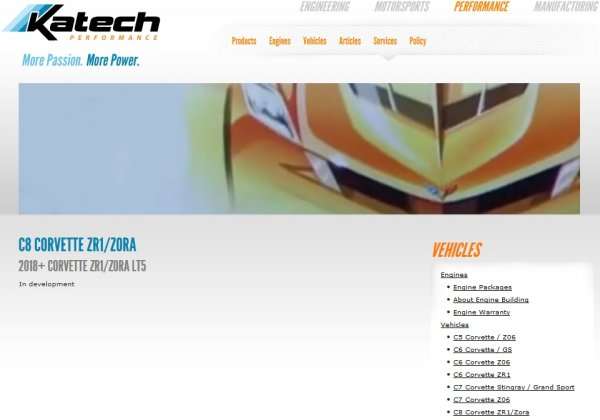 While there hasn’t been any official information on the expected 2018 C8 Corvette ZR1 or Zora – whatever the super-Vette might be called – an experienced high performance GM tuning company has a listing for a C8 2018 Corvette ZR1/Zora with an LT5 engine on their website.
Advertisement

Over the past few years, we have talked a great deal about the rumored arrival of a new Corvette with greater performance capabilities than the current Z06. It has been speculated that this new super-Vette – which could be called the ZR1 or the Zora - could arrive during the current generation or it could come in the form of the long-rumored mid-engine Corvette in the 8th generation. At first, it was unclear as to what engine would power the ZR1 or Zora, but over the past year, it has become more and more likely that General Motors would reincarnate the LT5 name for the newest premium performance Chevrolet Corvette.

The rumors of a new LT5 for the Corvette ZR1/Zora first kicked up when the automaker trademarked the name back in 2013, but over the past year, insider information has served to support those early rumors. However, there has really been nothing from within the industry to support the future existence of a ZR1 or z Zora with the LT5 engine – until now.

Katech Lists the C8 ZR1/Zora with an LT5
This morning I received a few emails from readers with a link to the website of the GM performance experts at Katech, which now includes a listing for a C8 2018 Corvette ZR1/Zora – complete with an LT5 engine.

If you are unfamiliar with Katech, the Michigan-based tuning experts were responsible for the Corvette Racing engines (that program is now handled internally by GM) and they still build all sorts of endurance race cars based on GM vehicles for teams around the world. Katech isn’t directly associated with GM, but the company has major ties with the automaker – which is why this listing should be taken seriously.

In other words, this isn’t some random, tiny tuning shop in Podunk, Iowa looking to get some attention – Katech is a serious GM performance shop with ties to the automaker which go way back. If anyone has the capacity to get ahold of information ahead of time, it is Katech…and it just so happens that Katech has a page on their performance parts website for the 2018+ C8 Corvette ZR1/Zora with the LT5 engine.

For most of the vehicles on the Katech website, clicking on a specific model takes you to a page with the available performance packages, but the listing for the 2018+ ZR1/Zora simply says “In Development”.

Now, it is completely possible that the folks at Katech have simply created a page on their website with the key points from the rumors about the C8 Corvette – that it will arrive for 2018, that it will be called the ZR1 or Zora and that it will have the LT5 engine. They might not have any more information on the future of the Corvette than you or I, but there is also a chance that Katech knows that the 2018 model year will introduced the C8 Corvette with the ZR1/Zora package and the long-rumored LT5 with 750+ horsepower.

All we can do is wait and see what GM brings out in the next 18 months, but it looks as though the GM performance experts at Katech are expecting the C8 Corvette ZR1/Zora to drop in 2018 with an LT5 engine.