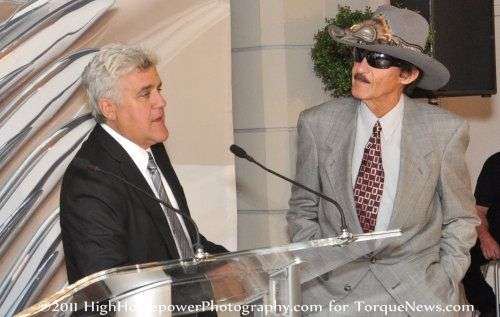 Well known TV personality and automotive collector Jay Leno originally stated that he wasn’t interested in buying the very first 2011 Chevrolet Volt but Leno is among the celebs who was quick to grab up the new electric Chevy - which after 11,000 miles still hasn’t made a trip to the gas station.
Advertisement

Prior to the 2011 Chevrolet Volt going on sale, Jay Leno was asked if he was interested in buying the very first Volt (presumably as a collector’s piece) to which he said “no”. This caused a media frenzy focusing around the fact that Leno, who is a big supporter of the American automakers, was not a fan of the Volt. However, when we had a chance to speak with Mr. Leno last summer at the Walter P Chrysler Museum, he pointed out that his comments didn’t suggest that he didn’t want a Volt – he just didn’t want to buy the very first one as a collectable. He went on to say some very nice things about the Volt and not surprisingly, when the electric Chevy with a range extending gasoline engine hit the market, Leno was among the early buyers.

Since taking delivery of his new 2011 Chevrolet Volt on December 12th, 2010 Jay Leno has used his new electric sedan to commute back and forth to work, racking up almost 11,000 in less than a year. In that time, Leno has had to put gas in the Volt exactly zero times as he has used the car strictly for his daily commute from his home in Burbank California to the studio – a drive which is around 35 miles. Thanks to the electric range of the 2011 Volt being around 40 miles (our own testing found that the range varied between 38 and 48 miles, depending on driving styles and situations), Leno has almost never been forced to use the range extending gasoline engine so the half tank of fuel in his Volt is the same fluid that was in the car when the General delivered it almost a year ago.

While speaking with the New York Times, Leno talked up his 2011 Volt, pointing out that along with using almost no gasoline over the course of 11,000 miles of driving he could use his Volt to make the 280 mile trip from his home in Burbank to the Las Vegas Strip. The TV funny guy also pointed out that the Volt’s biggest competition – the Nissan Leaf – can only last around 100 miles on a single charge to while the Leaf would serve as just as good of a commuter vehicle, it has limitations that prevent it from being someone’s only vehicle.

While Jay Leno has one of the world’s most remarkable collections of new and old cars, trucks and motorcycles, we would expect that when Leno heads to Vegas for a weekend he might be driving something with a little more spunk. However, in pointing out that the Volt can go 11,000 miles in a city commuter setting without making a single stop for gas while also being capable of serving as a good long-trip vehicle, it shows the true beauty of this electric Chevy. During my time with the Chevy Volt, I did use the gasoline engine but over the course of 8 days, I got an impressive 109mpg...you can read more about that by clicking here!