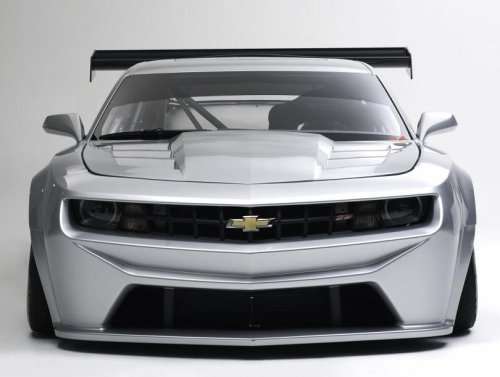 There are plenty of companies in the US that have built their take on the ultimate Chevrolet Camaro race car but the German company Sareni United has announced that they are now offering the Camaro GT race car to teams interested in piloting an American muscle car in the growing International GT racing universe.
Advertisement

The new Chevrolet Camaro GT race car is designed and built by Sareni United, a group led by long-time designer Hans Reiter, and while this new Camaro race car is designed, engineered and built in Germany – it is still an All-American muscle car. As an interesting point, even though Hans Reiter made a name for himself putting together winning race teams that featured Lamborghini models, Reiter formed Sareni United specifically to build a Camaro GT race car. . “I was immediately fascinated by the design. The Camaro is a real men’s car, a muscle car, it is designed to be on a race track”, says Hans Reiter. The design officially began in October 2010 when the Federation Internationale de l'Automobile (FIA) gave the approval for the homologation of the Chevrolet Camaro SS for GT track use began. The result is a Camaro built for GT3, GT4 and international touring car racing sporting a powerful look that preserves the American design cues.

The key feature of this purpose built Camaro GT race car is the 7.9L General Motors V8, provided by Michigan-based Katech Engines. If that name sounds familiar, it is probably due to Katech’s long and successful history of providing engines for the Corvette racing programs including the C5R and C6R GT1 race cars along with the current Cadillac SCCA racing program – all of which have had great success at International GT events around the world. Katech’s 7.9L V8 is capable of churning out up to 650 horsepower and 627lb-ft of torque (depending on the application), with all of that power being channeled to the rear wheels via a new Holinger gearbox controlled by steering wheel mounted paddle shifters.

The announcement from Sareni United making these Camaro GT race cars available to the racing public doesn’t go into much detail as to what has been done with the suspension system of the Camaro racer, Sareni does state that the weight of the Camaro GT has been cut down to just over 2,800lbs. As you can see in the gallery on the right (click any thumbnails to have a closer look), the Sareni Camaro GT racer includes a heavy dose of exterior mods that offer improved aerodynamics as well as likely enhancing the Camaro’s ability to keep the engine and braking systems nice and cool including huge vents in the custom hood, a unique front fascia, unique front fenders, a prominent lower diffuser out back and, of course, that massive rear wing.

The YACO Racing Team of Germany was the first group to order the Sareni-built and Katech-powered Camaro GT race car, ordering a pair of American muscle cars for use in the ADAC GT Masters races in Germany this year. Sareni plans to deliver these first two Camaro race cars in March – just in time for YACO to campaign the Camaro GT at the Oschersleben event from April 12th – 14th, 2012. “I am looking forward to the first race of the Camaro GT, it will be very exciting. The racing car is an option for a lot of teams because it provides an interesting cost structure. Uwe Geipel‘s team YACO will use two cars for the ADAC GT Masters races. Perhaps they can also compete in the GT3 European Championship. We also have a lot of serious requests from the GT4 and touring car series. Our idea of attracting new customers instead of taking away teams from other manufacturers has worked so far”, says Reiter.

Along with making a great looking American muscle car that is legal for a variety of forms of FIA racing, Reiter wanted to put together a car that was affordable enough to attract new teams to the International GT and FIA world. The stated price of the Camaro GT (presumably in GT3 form) is around $253,000. This might seem like a far cry from affordable but when you consider that comparably European exotics turned into race cars carry a stock street-form price nearing a quarter million dollars (like Reiter’s previous Lamborghini racers), $253k for this fully race-ready Camaro is really a bargain for the racing world.

The various racing series’ that fall under the watch of the FIA and the International GT banner are far more popular in Europe and other countries than they are in the US but with the growth in popularity of events like the Rolex 24 at Daytona, hopefully we will get a chance to see the new German-built Camaro GT do some winning on North American soil. If nothing else, much like the Dodge Viper did in the 1990s, the Camaro has a chance to show off American performance on the global stage.

Anonymous wrote on January 4, 2012 - 5:52pm Permalink
man this all american german racer is awsome, but i wish gm could atleast make more horsepower out of a 7.9L than ford makes with a stock supercharged 5.0L .