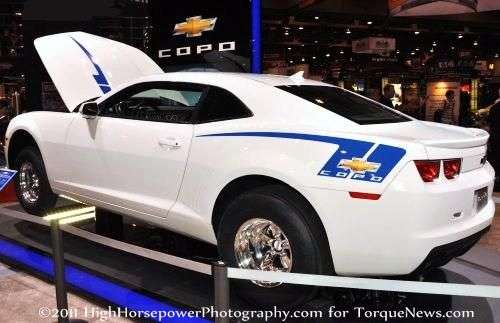 The day before the 2011 SEMA Show opened in Las Vegas, the folks from General Motors invited a select group of media to meet just outside of the Las Vegas Convention Center for the debut of a new product that turned out to be the new Chevrolet COPO Camaro Concept – and now GM has offered up a video of this new drag strip monster on the track.
Advertisement

If you are somehow unfamiliar with the Chevy COPO Camaro Concept, it is a purpose built race car set to compete with the likes of the Ford Mustang Cobra Jet and the Dodge Challenger V10 Drag Pak.

The new COPO Camaro is fitted with interior and exterior modifications to make it legal and ideal for stock and super stock drag racing including a full roll cage, removal of non-essential items (radio, heating/air conditioning items, a back seat) but more importantly – there is a 2-speed PowerGlide transmission, a solid rear axle and the buyers’ choice of two high performance GM crate motors.

The first engine is the supercharged 327 cubic inch LSX engine fitted with a 2.9L Whipple supercharger and the second is 427 cubic inch LS7 borrowed from the Corvette Z06 with modifications made to allow it to fit into the stock eliminator racing class.

Unfortunately, no horsepower figures have been offered thus far but those familiar with these two high performance engines know that the new Chevy COPO Camaro Concept will certainly pack the power to keep up with the Mustang Cobra Jet and Challenger V10 Drag Pak. Also unfortunately and like the two super stock competitors from Ford and Dodge, the COPO Camaro Concept is not expected to be street legal should it see production.

The Chevrolet COPO Camaro Concept looks great in person and sounds even better but for those who were unlucky not to be at the COPO debut in Vegas, GM has offered up a video of the new COPO Camaro drag package on the track. GM is testing the car with what seems to be an intent to offer the car to racers for the NHRA Stock and Super Stock eliminator classes and their recent stop, which was caught on lots of cameras, was to Bradenton Motorsports Park in Florida.

The result is a 2 minute and 32 second video featuring the COPO Camaro tearing up the drag strip with each of the two available engines. Between shots of the new COPO Camaro launching from the starting line and soaring through the top end of the track, there is a variety of interview segments with GM brass…all of whom express their satisfaction with how well the car performed.

Towards the end of the video, Chevrolet Performance Parts Marketing Manager Cliff Cohen stated that the COPO Camaro “met or exceeded every expectation that (GM) had over the last three years to get to this point today. The vehicle went down the track…it turned the times that we thought it would and we’re leaving here today very, very satisfied.”

Anonymous wrote on December 30, 2011 - 6:47pm Permalink
oh yea are we going to finally get to stop detuning our cobrajets now. PLEASE
Anonymous wrote on January 1, 2012 - 12:54am Permalink
that crapo looks kinda slow compaired to those cobra jet videos maybe why gm dropped their video . so why the change to a solid axle i thought the corvette irs was the only way to go i read articals that said ford was behind gm because the camaro had such a great off the line launch with their irs. looks like ford knows what kind of muscle car americans want . gm switching to a solid axle kinda puts them behind cause ford seems to have a pretty good handle on that live axle that gm give up on.
TealTornado wrote on January 21, 2012 - 7:47pm Permalink
It won't look so slow when it passes your Ford...or Dodge, or whatever you want to bring.

LG's New EV Battery Plant Is a Welcome News for Tesla
Tesla Giga Berlin's New Hurdle: It's Not Only the Gov't, but Now Tesla Itself
END_OF_DOCUMENT_TOKEN_TO_BE_REPLACED