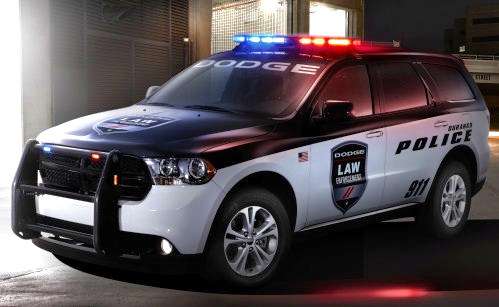 The battle for police car supremacy is heating up with each of the Detroit Big 3 already offering police sedans and today, the Chrysler Group joined GM and Ford Motor Company in introducing their new special service police sport utility vehicles in the form of the Dodge Durango Special Service.
Advertisement

The Dodge Durango Special Service SUV is available in either rear or four wheel drive configurations with the standard 3.6L Pentastar V6 or optional 5.7L Hemi V8. The Durango police/fire vehicle includes all of the standard features of the Durango that is sold in Dodge dealerships but for police use, the Chrysler Group adds heavy duty braking components, a 220 amp alternator, a heavy duty battery, a high volume water pump and an external engine oil cooler – all of which help to combat the extreme usage of police vehicles.

Inside, the Dodge Durango Special Service models ditch the third row seats for additional cargo room (or more room for the K9 officers), super bright interior lighting and the wiring for the exterior spotlight and other police-specific gadgets inside of the vehicle. Even though the back seat may be reserved for the bad guy, the Durango Special Service includes separate heating and air conditioning controls for the second row of seating. In place of the third row seats, there is a customizable cargo area featuring under floor storage compartments and more storage spaces along the side with a total of 85 cubic feet or storage space.

“The standard Durango has several class-leading attributes, such as power, towing and a driving range of more than 550 miles, so it is a natural to become a great utility tool for law enforcement and general fleet customers,” said Reid Bigland, President and CEO – Dodge Brand. “This Special Service version will no doubt be a major asset to any agency in need of a durable, yet comfortable, SUV.”

The 3.6L Pentastar V6 makes 290 horsepower and while Chrysler hasn’t quoted any fuel economy figures, they claim that the 3.6L Dodge Durango can go further than 550 miles on a single tank of gasoline. The civilian issue Durango with the Pentastar V6 and rear wheel drive offers 23mpg and has a 24.6 gallon fuel tank for a total range of 565.8 miles; leading us to presume that the police version of the V6 Durango will offer somewhere in the area of 23mpg on the highway. This engine also affords the officer the ability to tow 6,200 pounds.

Those police forces who need more power out of their sport utility models can pick the Durango Special Service model fitted with the 5.7L Hemi V8. Packing 360 horsepower and 390lb-ft of torque, the Durango will comfortably be the most powerful SUV in the police and fire world while also boasting a class leading towing capacity of 7,400lbs.

The Dodge Durango Special Service SUV joins the Dodge Charger Pursuit and the Ram 1500 Special Service – giving Dodge the widest offering to police and fire departments around the country. The Durango Special Service will go toe to toe with the Ford Police Interceptor Utility based on the new Explorer and the Chevrolet Tahoe PPV while the Charger Pursuit combats the Chevrolet Caprice PPV and the Ford Police Interceptor that is based on the Ford Taurus. Like the Charger compared to the other modern police cars, the Durango is the most powerful option in the segment.