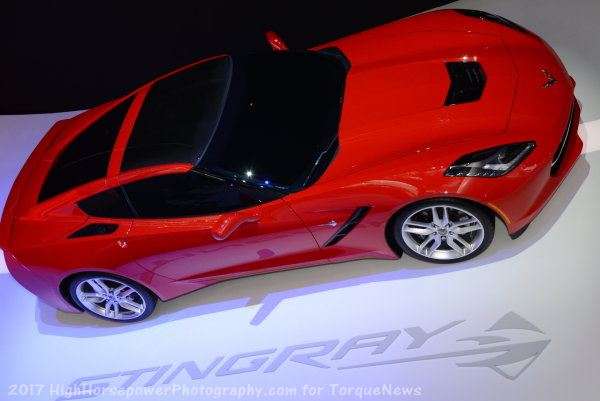 Imagining a Midcycle Engine Refresh for the C7 Corvette Stingray

There has been lots of discussion about new engines coming to the Chevrolet Corvette lineup in the form of new, high performance models, but there is an outside possibility that the Stingray could get a new engine before it gets a new look – albeit a long shot.
Advertisement

Since the 2014 Chevrolet Corvette Stingray introduced the world to the C7 generation of the fabled American sports car, there has been a ton of speculation about new trimlines and the engines which would power those trimlines. At first, we speculated about the possibility of a new Corvette Z06 or ZR1 and that speculation ended when the C7 Corvette Z06 was introduced with the supercharged LT4 with 650 horsepower and 650lb-ft of torque.

The C7 Corvette Z06 is more like the C6 Corvette ZR1 with its supercharged V8 and premium amenities inside and out, which led to more speculation about a C7 Corvette with even more power – which is presumably set to be called the ZR1. Of course, there are also the long-popular rumors that there is a mid-engine Corvette coming which will also feature a new engine of its own, and each of these rumors touch on the fact that the LT5 name could be reincarnated with the next super-Vette.

Really, it seems that every rumor about any new General Motors V8 directs us to the next high performance Corvette – whether it is called the ZR1, the Zora or some other unique name – because we know that there is a higher performance car coming in the near future. What we don’t ever seem to consider is the possibility that there could be a new, more powerful engine in the Corvette Stingray before the end of the C7 generation.

A Naturally Aspirated, DOHC Corvette?
With the exception of a few engines along the way, the Chevrolet Corvette has historically been powered by an overhead valve engine or, as they are better known – a pushrod engine. While other companies (like Ford) have gone to a dual overhead camshaft setup with their V8s, both GM and Mopar have continued building pushrod engines with a tremendous amount of success. However, information from GM’s dealer service computer system indicated that there is a naturally aspirated 6.2L V8 coming with an all-aluminum construction and, more importantly, a dual overhead camshaft cylinder head design.

When the news of this engine in the GM service system surfaced, the discussion around the automotive watercooler suggested that it could be the next super-Corvette engine, but there are a few problems with that idea. Most notably, if this new engine is naturally aspirated, it is highly unlikely that it will produce enough power to serve as a proper powerplant for a Corvette with greater performance attributes than the current Z06. Even with all of the modern engine technology at work, it seems unlikely that this NA, all-aluminum, DOHC V8 would offer more than 600 horsepower, but it seems perfectly reasonable to expect power levels in the high-400 or low-500 range.

Right now, Chevrolet has the Camaro SS and Corvette Stingray both relying on the LT1 V8, with slight variations in power between the two GM coupes. One good way for GM to put some space between the Camaro and the Corvette would be to add a little extra power to the Stingray, and they could do that by introducing a new engine for the Stingray in the next few years.

This all-aluminum, DOHC V8 would almost certainly be more fuel efficient than the current 6.2L LT1 V8, but it will be more efficient while also offering more power. If GM could engineer this new DOHC engine to deliver somewhere in the area of 500 horsepower, it would have a distinct advantage over the Camaro SS in performance while being a little better on fuel. Also, this new engine will almost certainly be lighter than the LT1, which would improve the performance of the Stingray on every level.

It has Happened in the Past
While some people might be scoffing at the suggestion of a new engine in the Corvette Stingray in the next few years (and I admit that it is a longshot), this would not be the first time that GM rolled out a new engine for the “base model” Corvette in the middle of a generation. During the C4 era, GM switched from the L98 V8 to the LT1 for the 1992 model year and during the C6 era, GM swapped from the LS1 to the LS3 for the 2008 model year. Both of these changes came in the middle of the generation and that switch from the LS1 to the LS3 is what leads me to believe that we could see something similar for the C7 in the next few years.

Of course, this is all purely speculation based on what little information we have, but there is no question that a Corvette with a touch more power and a new, more efficient engine design would allow Chevrolet to put some space between the Camaro SS and the Stingray – which could have a positive impact on the sales numbers of both cars.

Colby wrote on March 14, 2017 - 11:50pm Permalink
Please explain how a DOHC engine is going to be lighter than the current pushrod setup? Every DOHC variant I've seen weighs more. Look at Ford's 5.0...
dwight looi wrote on March 21, 2017 - 6:41pm Permalink
FALLACY ONE -- A DOHC ENGINE IS MORE FUEL EFFICIENT Actually the opposite is true. A DOHC engine always consume more fuel than a Pushrod 2-valve engine of a similar displacement and technological content. In fact, a pushrod engine is frequently more fuel efficient than a DOHC engine of smaller displacement! Why? Because a DOHC engine has four times as many camshafts and twice as many valves -- that equals more friction and more fuel wasted overcoming friction. Whatever "breathing" advantage of a DOHC head design is irrelevant for fuel economy purposes because fuel economy is not measured at wide open throttle. At part throttle, your throttle body is choking the engine and the source of ALL aspiration drag. DOHC engines' advantageous lie in its ability to flow enough air at high rpm (7000~10000 rpm). But to support operation at such engine speeds they typically have cam lobe profiles which have high lift, long duration and significant overlap. These type of cam grinds have poor intake velocity and lousy scavenging at cruise speeds. Unless you have a cam lobe switching implementation -- like VTEC or VVTL-i -- such cam grinds REDUCE output and fuel economy. FALLACY TWO -- A SMALLER DISPLACEMENT ENGINE IS MORE FUEL EFFICIENT The case for lower displacement equaling lower fuel consumption is shaky at best (just like the case for global warming). It takes burning X amount of fuel with a corresponding amount of air to make power. It takes power to move a car. To burn X amount of uel you need to ingest a given amount of air. Doing it with a larger displacement incurs a bit more friction from bigger pistons. Doing so with smaller displacement force fed by turbos incurs lower compression, whereas doing so by spinning a smaller engine to 8000 rpm incurs low torque numbers which necessitate lower gearing. Statistically the fuel economy impact are not very different! Don't believe me? Let's look at real world statistics. Example #1: The Cadillac ATS-V for example has a 3.6L Twin Turbo V6 with 464 hp / 445 lb-ft and a 17 mpg (city) / 25 mpg (hwy) EPA rating. The 2017 Camaro SS has a 6.2L pushrod LT1 with 455 hp / 460 lb-ft and a 17 mpg (city) / 28 mpg (hwy) EPA rating. Both cars weigh about the same and use the the GM 8L90 8-speed automatic with a 7.0:1 ratio spread. Example #2: The Chevy Cruze 1.4T has a (153 hp / 177 lb-ft) 1.4L turbocharged 4-cylinder with 30 mpg (city) / 40 mpg (hwy). The Honda Civic 2.0 has a 2.0L (158 hp / 138 lb-ft) 4-cylinder engine with 31 mpg (city) 40 mpg (hwy). Again, both cars weigh within 50 lbs of 2900 lbs. -- What we just engaged in is a scientifically discussion with real engineering facts. All the propaganda you hear by about "downsizing being the only way forward", and the practice of marginalizing everyone who says otherwise, is FAKE NEWS.

LG's New EV Battery Plant Is a Welcome News for Tesla
Tesla Giga Berlin's New Hurdle: It's Not Only the Gov't, but Now Tesla Itself
END_OF_DOCUMENT_TOKEN_TO_BE_REPLACED