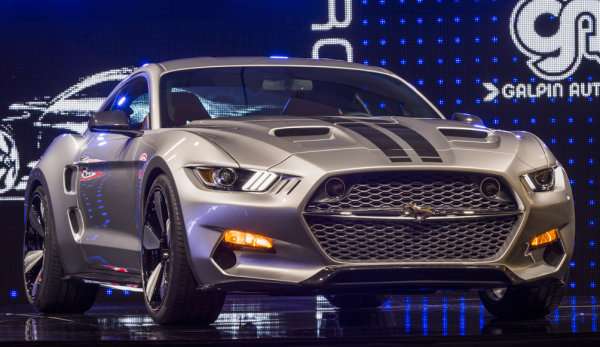 I'm Loving Everything About Fisker's Rocket Mustang Except the Grille

One of the most surprising introductions at the ongoing 2014 Los Angeles Auto Show is the new Rocket Mustang that was designed by Galpin Auto Sports and Henrik Fisker, with a very unique facelift to the 2015 Mustang GT and while I love almost everything about Fisker’s Rocket Mustang – I just cant love that huge grille opening.
Advertisement

When I first heard that Henrik Fisker would introduce his own unique version of the 2015 Ford Mustang at the 2014 LA Auto Show, I was more than a little intrigued. Fisker is known as one of the leading designers in the automotive industry, having had major influences on a variety of brands including Ford, Aston Martin, BMW and, of course, his own company Fisker Automotive. Based on what I have seen from his past works, I expected to love his take on the 2015 Mustang and honestly, I love almost every aspect of the Rocket Mustang. However, I just cannot get over the Hyundai Veloster-esque grille.

The Rocket Mustang
Henrik Fisker teamed up with Galpin Auto Sports to design the ultimate Ford Mustang, and although the Rocket is based on the 2015 Ford Mustang GT, very little has been left unmodified. Most noticeably, the Rocket Mustang wears a custom carbon fiber body that maintains the look of the new Mustang while adding some vintage cues that really make for a great looking pony car. Wider flared fenders and rear quarter panels help to make room for the huge custom wheels and in the accentuated quarter panels, there is a set of vents that provide cooling air to the rear brakes. These wider fenders also give the car a much more muscular look. The huge wheels are simple, yet dramatic enough to stick out as a unique feature. The wider rear quarter panels of Fisker’s Rocket Mustang flow into a molded tail section that includes a duckbill style spoiler, a unique carbon fiber taillight panel and a super aggressive lower rear fascia with an integrated diffuser setup and four round exhaust tips. This rear end is far more streamlined than the 2015 Mustang GT, but Fisker has created this new rear form without killing the basic look of the new Mustang.

While Ford Mustang purists may not like the redesign of the 2015 Mustang, I think that Henrik Fisker has done a great job of designing the side lines and the rear end of his Rocket are a work of art. The changes made give the car a remarkable stance that is fitting of a 725 horsepower American muscle car.

The Front End
I love the look of Fisker’s Rocket Mustang from the sides and rear, and I love the unique hood that shows clear inspiration from the 1968 Shelby GT500. However, the gigantic grille opening it what kills the face of this Mustang for me. It looks like Fisker pulled a grille from the Hyundai Veloster Turbo parts bin, stuck a chrome trim piece across the middle and added the running pony badge. I understand that to feed and cool the supercharged 5.0L V8 that makes an incredible 725 horsepower, they need lots of air flow, but that grille is just too much. I like the basic shape of the front fascia with large vents at the bottom corners and an angular chin spoiler running across the front end. I also like the silhouette that is created by this elongated front fascia, but that gaping grille just looks totally out of place on this car. Now, I have to point out that this is just my opinion and opinions are totally subjective, so I imagine that there are plenty of people out there who love the look of the Rocket Mustang. If there was a less Hyundai-like grille, this would be my favorite take on the new Mustang, but that grille kills it for me.

Click any of the thumbnails above for a closer look at the Fisker Rocket Mustang and if you love it, Galpin will be selling these custom muscle cars for a price expected to land around $100,000.

JeffS wrote on November 26, 2014 - 10:25am Permalink
Damn, one fine looking ride and it sounds like it has the mojo to back it up. Actually I like the grill and how the surrounding and intersecting lines are integrated into it. Do you not like it because it reminds you of a Veloster, or would you still see it out of place if there was no Veloster? Reminds me a mite of the Fusion grille also, which I like. I have to give Kudos to Torque, one of the few that recognizes that Cars in general are really about the, "Subjective" emotions it brings to an individual, not the, "Objective" test scores. Of course that matters, but even there, objective numbers translates to the buyer in a subjective manner. Quick, obvious example of extremes, one person is looking for the best mileage that they can find in a car, the next wants monster horsepower. That doesn't make one or the other a bad choice. I think that is why our "cars" become part of the family and so ingrained into our culture. "Subjectively" there are really no bad choices and so much to choose from. It comes down to what makes the buyer happy, regardless of what the neighbor thinks. Very wicked car. I wonder what Ford thinks about it, "Subjectively".