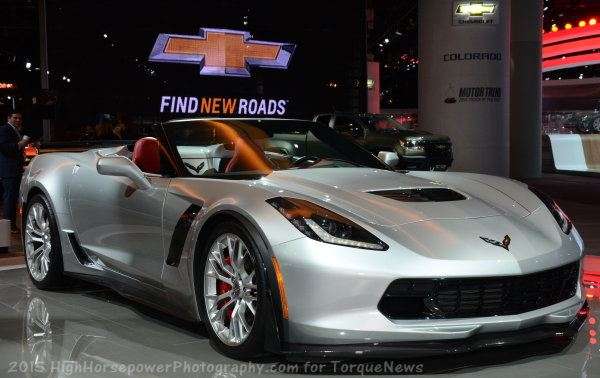 How Does GM Improve the C7 Corvette?

The C7 Chevrolet Corvette has proven to be incredibly popular, posting strong sales numbers month after month after more than a full year of being on sale, but with the constant push to stay ahead of the competition, how will GM improve the Corvette?
Advertisement

I was talking with a few guys (one of whom was driving a C7 Stingray Convertible) at a car show the other day about the modern Chevrolet Corvette, and they both voiced their concerns over the fact that “nothing changed for 2016”. Now, I felt the need to point out that sales numbers were steadily strong month after month and really, there is no solid competition for the Corvette in Stingray or Z06 form, so there is no real need for GM to make changes right now. They both pointed out that with the new Camaro SS coming out with similar drivetrain components to the Stingray, and to simply stay ahead of the in-house competition, the company needs to bring something new to the Corvette lineup.

While I don’t necessarily agree with the dire need for changes in the C7 Corvette lineup, the discussion got me wondering what GM will do to freshen up the Corvette – and when.

The Next Trimline
When the C7 Corvette was introduced for the 2014 model year, it was first available as a coupe and a short time later, the convertible went on sale; both of which had the new LT1 V8. For the 2015 model year, the Z06 coupe and convertible joined the lineup as the most powerful factory-built Corvette ever thanks to the 650hp LT4 V8, but the arrival of the new Z06 also brought the quick shifting 8-speed automatic transmission to the Stingray, making the Stingray quicker and more efficient.

For the 2016 model year, there were no trimline additions to the Corvette and no significant mechanical changes, but there is the C7.R Special Edition, the Twilight Blue Package, the Spice Red Package and the Black Suede Package – all of which are strictly appearance upgrade packages. There are also some new colors inside and out, a standard leather steering wheel with the flat bottom sport design, a standard front view camera on select trimlines and some new stripe packages. Enough to stay fresh with consumers who have been waiting for their ideal Corvette to go on sale, but not much to really catch the attention of a formerly disinterested shopper.

Based on what we have seen in past years, I expect that in the next year or two, we will see the return of the Corvette Grand Sport. During previous generations, the “handling package” that we know now as the Z51 package has been fitted with a few extra features and renamed the Grand Sport. It has worked in the past and right now, a Corvette Grand Sport would most certainly sit well with prospective buyers both inside and outside of the Corvette enthusiast community.

A New Stingray Engine
One of the guys at the car show pointed out that in the past, Corvette engines have only lasted a few model years. The LS2 from the C6 Corvette only survived through 3 model years before being replaced by the LS3 and the LS3 lasted 6 years before being replaced by the LT1. We are currently in the third model year of the LT1, but the engine has proven to be more of a beast than any “base” Corvette engine in the past, so I would expect to see GM use this engine in the Stingray for at least 5-6 model years. Based on that, the Stingray should rely on the LT1 until at least 2018 or so, but that is a long time away and a great many things can change in the meantime – forcing GM to change their plans.

A New Super-Vette
Finally, there are still plenty of Corvette fans and owners demanding what they are calling a proper Corvette Z06. While the 2015-2016 Corvette Z06 is the most track capable Corvette ever, this Z06 still has a great many features that aren’t needed in a proper track car. Because of this, the current Z06 is also the heaviest Corvette ever, so those guys who race all of the time aren’t in love with the C7 Z06. For those folks, something like the old Z06X Sema Concept might serve as the perfect answer, basically hitting the market as a Z06 with all of the performance parts but none of the luxury bits of the current Z06.

Perhaps GM could use this Z06X to bulk up the Corvette lineup for 2017 or 2018, but with the success of the Stingray and the Z06, and the continued strong sales, it should be at least a couple more model years before we see any real changes to the Chevrolet Corvette.

Fortunately, both the Stingray and the Z06 are so awesome that “being stuck with them” is a good problem for sports car buyers to have.