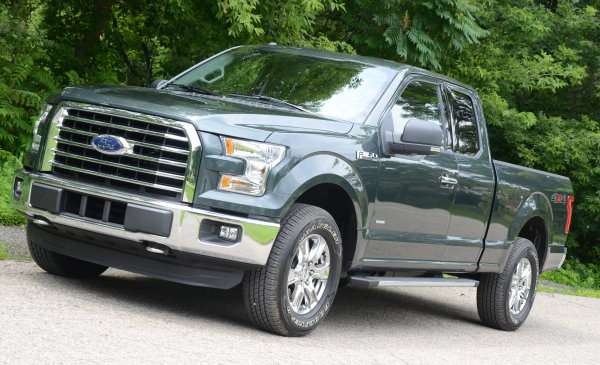 In an effort to continue to satisfy those new truck buyers who like to go fast, the 2016 Ford F150 will include a new Sport Mode that has been borrowed from the 2015 Ford Mustang – bringing with it quicker shifts and rev-matching for a more engaging driving experience from the 2016 F150.
Advertisement

While there are plenty of Miata owners out there who couldn’t possibly imagine why someone would want a Sport Mode in their half ton pickup truck, I own a tuned half ton pickup with around 400 horsepower and I love the idea of the 2016 Ford F150 Sport Mode. In my own truck, one of my key complaints was the soft shifts and while I was able to fix that problem with an aftermarket tuner, 2016 F150 owners will be able to stiffen up the shifts with the push of a button.

2016 F150 Sport Mode
The new Sport Mode in the 2016 Ford F150 was borrowed from the 2015 Mustang, but it works in much the same way as the Tow/Haul Mode, except it is specifically tuned to optimize performance. In Tow/Haul Mode, transmission shifts are delayed a bit, allowing the engine to remain in the peak torque range for smoother pulling – especially when pulling out from a stop. Sport Mode works in a similar way, stretching the gears out for optimized acceleration while also shifting more quickly from gear to gear. Sport Mode will also hold a gear longer when the driver lets off of the gas for a second and when the 6-speed automatic transmission does need to downshift, the Sport Mode features rev-matching.

Sport Mode in the 2016 Ford F150 is activated with the Tow/Haul button, which when pushed twice quickly lights an amber S on the gauge cluster, much like the new Ford Mustang. Ford hasnt offered any improved performance numbers, but this Sport Mode might allow the new F150 to get from 0-60 quicker and for those who like to drag race their trucks - Sport Mode might help it get down the track a little quicker.

Best of all, the new Sport Mode feature is standard in all 2016 Ford F150 pickups, so regardless of the engine, trim or drive configuration (4x2, 4x4), 2016 F150 drivers can enjoy a feature that should make the new truck more fun to drive.

Lots of New Features for 2016
Although the current Ford F150 was all-new for the 2015 model year, the Motor Company has worked to improve an already very good pickup with features that will make the truck better for their key customers. While there are plenty of media members who will never understand the allure of having a truck that can tow a trailer and earn some respect on the drag strip, truck owners understand why these new features each add a little extra something for the 2016 model year.

Along with Sport Mode, the 2016 Ford F150 will benefit from the Trailer Backup Assist system, a CNG prep package, new exterior colors, a few new appearance packages, the Sync 3 infotainment system and the new 2016 Limited package – ushering in a new level of premium luxury to the bestselling pickup truck.