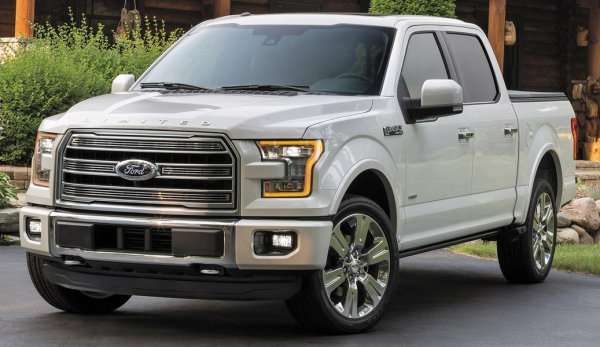 The 2015 Ford F150 and its aluminum body are selling so well that the Motor Company is having a hard time meeting the demand, but in an effort to keep the new half ton pickup fresh for 2016, Ford has made 6 simple yet impactful changes for the new model year.
Advertisement

The 2015 Ford F150 is still new enough that the masses haven’t started bugging for new features, but in understanding that the highly contested half ton truck market, Ford Motor Company has made some changes for the 2016 model year to stay one step ahead of the competition. None of these changes are all that impactful, but they should all help to keep F150 sales on the rise into next year.

The 5 Changes for the 2016 F150
At first glance, it will be hard to tell the 2015 and 2016 Ford F150 apart, but there are 6 changes for 2016 that should make a difference on the sales sheets. This includes new exterior colors, new special edition appearance packages, the new trailer backup assist feature, a new infotainment system, a natural gas prep package and – most importantly – a new premium trimline for those folks looking for a more luxurious experience from their new F150.

New Exterior Colors
The 2016 Ford F150 will be available in two new exterior colors, Shadow Black and Lithium Gray. Tuxedo Black and Guard Metallic are being removed to make room in the color palate for the new hues.

Natural Gas Prep Package
There is a growing push for more natural gas vehicles in the United States and the 2016 Ford F150 will come with a Natural Gas Prep Package for those folks looking to run dual fuel in their half ton pickup. This will be a low take rate option, but it is key for those folks who have easy access to a natural gas refueling station.

Sync 3 Infotainment
The 2016 Ford F150 will come with the new Sync 3 infotainment interface, which is replacing MyFord Touch. While I am a fan of MyFord Touch, the system has been criticized by the technologically inept and this new Sync 3 system is expected to be more user-friendly, quicker and more advanced. This will also usher in a new look to the infotainment screen.

2016 Ford F150 Limited
Billed as the most luxurious and most advanced F150 ever, the 2016 Limited package (shown above) could be the most luxurious half ton truck ever when it arrives. On the outside, the F150 Limited gets unique badging on the hood, unique 22 inch wheels, a satin grille finish and satin door/tailgate handles. On the inside, the F150 Limited gets leather front and rear seats with the front seats being heated, cooled, power adjustable and massaging while the rear seats “only” keep you warm. In addition to the premium Sync 3 infotainment system, there is plenty of wood and leather trim along with all of the high tech driver assist systems offered in the modern Ford truck lineup.

The 2016 F150 Limited is only available in four colors - Shadow Black, Magnetic, Blue Jeans and White Platinum – and the 3.5L EcoBoost V6 is standard.

Kevin wrote on August 28, 2015 - 5:55am Permalink
Do you know when the 2016's are supposed to hit the dealers?
Dennis Noble wrote on November 21, 2015 - 5:05pm Permalink
Why should I buy a 2016 when already Ford is advertising the2017 models. I feel that maybe Ford might not be putting too much effort into the 2016 F150 lineup.
Greg wrote on December 6, 2015 - 5:10pm Permalink
I think you're probably reading about the 2017 Super Duty, which will be a redesign from the ground up next Fall; not the F150, which just had a total redesign from 2015 and one wouldn't expect too much to change. The 2016 will be a year newer for resell, and although it wasn't mentioned here, I think the reg cab and super cab get a fix that will help with the crash test dummies and maybe us as well in a frontal collision that will put them on par with the super crew for the iihs test.
Paul wrote on December 30, 2015 - 10:08am Permalink
Greg is correct, 2017 f150 will get some small changes but the Superduty series will be substantial including all aluminum body.
gregsfc wrote on December 31, 2015 - 8:20am Permalink
I think the SuperDuty will keep it's unique look to some extent by having a Super-Duty-like front grille and a completely different, Super-Duty style bed mounted on a stronger frame. But the cab will be the F150 cab for the most part, which I think is smart, because Ford has been at a cost disadvantage with the two totally different trucks versus their two competitors since the big departure back in 1999; and considering the time, effort and dollars put into this new, mostly-aluminum cab; I don't see how Ford can do better with a second, all-redesigned, aluminum cab specifically for the SuperDuty.
C. Davis wrote on September 25, 2016 - 4:24pm Permalink
I have a friend who recently purchased a F150 XLT 2016. He said that when he stop at a stop sign or red light...the truck cuts off. He said the salesman told him that it was a new feature to save gas. Is this true?
Gregory Faulkner wrote on September 26, 2016 - 8:26am Permalink
The 2015 and 2016 model F150s; only the one's with the 2.7-liter Ecoboost engine, come standard with an auto start/stop system that can be manually overridden each time one starts the truck. It uses a regular lead-acid battery (not a hybrid or a starter generator or anything like that). It has something in the software that keeps the transmission in gear when it shuts off for quicker moving upon restart. The only negatives I've found are: Often, I'm just stopping and going and don't really want the engine to shut off, but if I don't remember to override, it will shut off. Number 2, I love daytime running light, but I hate running lights left on with the engine off. My wife's Saturn car and my truck both do this upon engine shut off, and I'll often manually turn off the lights and then back to auto upon restart, but that's a hassle. And thirdly, sometimes, if I'm at a light or stop sign and ready to make an immediate left turn, when the engine first starts there is a delay in the power steering. Not for long, but long enough to give one an eerie feeling. For 2017, F150 will have auto start/stop on the new 3.5-liter EB and the 2.7-liter EB and maybe other offerings as well, but I'm not sure.