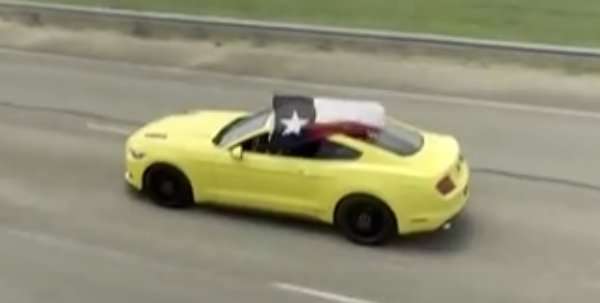 After nearing the 200 mile per hour barrier a few months back, John Hennessey and his team took his 2015 Ford Mustang GT back into their Texas shop for some new improvements and as a result, Hennessey’s Mustang GT recorded an impressive top speed of 207.9 miles per hour.
Advertisement

Back in February, John Hennessey took his own 2015 Ford Mustang GT fitted with the Hennessey Performance HPE700 package to the Continental Tire testing facility to make a proper high speed run. Hennessey has been allowed to let a few of his ultra-high performance cars stretch their legs on a Texas highway in the past, but for the Mustang top speed runs, the team turned to the safe confines of a test track.

During that initial run, John’s Mustang GT used its 717 horsepower and 632lb-ft of torque to reach a top speed of 195.4 miles per hour, which is a very solid number, but it still falls short of the stock top speed of the 2015 Dodge Challenger SRT Hellcat. To rectify the issue of the Hennessey Mustang GT being slower than the stock Challenger, Hennessey and his team headed back to the Continental Tires test facility for another run – this time with even more power.

The HPE750 Mustang
When John Hennessey made his first top speed run in the 2015 Ford Mustang GT a few months back, that pony car was equipped with the HPE700 package, which adds a supercharger, an upgraded fuel system and a tune to lift the output from 435hp and 400lb-ft of torque to 717hp and 632lb-ft of torque. Sadly, that package wasn’t enough to get the new Mustang over the 200mph mark, so this time, the Hennessey Mustang is fitted with the new HPE750 package.

As you might have guessed, the HPE750 package is very comparable to the HPE700 package, except the boost and fuel flow have been increased to lift the total output to 774 horsepower and 648lb-ft of torque. The hope was that the extra power would allow the Hennessey team top crack the 200 mile per hour barrier – and crack it, it did.

The Record Run
When John Hennessey piloted the 2015 Ford Mustang GT with the HPE700 package to a top speed of 195mph earlier this year, he did so in a video that read more like a Pennzoil commercial than a video featuring a Hennessey built Mustang. This time, Pennzoil was still well represented, but joining the team this time was legendary funny man Jay Leno. Leno now has a show that focuses on the car culture, so the Hennessey team invited him out to shoot a segment for his show with the HPE750 Mustang. Because of that, we only get some of the details on this record top speed run for a 2015 Mustang, as the rest will eventually debut on Leno’s show, but the video below shows all that we really need to know.

The video starts with some pointless banter, but quickly gets into the action, as someone who does not appear to be John Hennessey drives away in a bright yellow 2015 Mustang GT. A split in-car camera setup offers us a look at both the driver and the speedometer as the Mustang quickly and almost effortlessly climbs well past the 200mph mark. We can see the speedometer hit 207 and when the driver slows down, he confirms to the team via walkie talkie that the GPS speedometer recorded a top speed of 207.9 miles per hour.

The Cost of the Record Car
The modified 2015 Ford Mustang in the video below has a price as tested of $69,374, which includes the price of the Mustang and the price of the HPE750 modification package, including a unique suspension setup and 3.15 rear gears. That is a big chunk of change for a Mustang GT, but when you consider the fact that this car can hit 207mph, dash from 0-60 in just 3.4 seconds, blast through the quarter mile in just 10.9 seconds at 133 miles per hour AND serve as a daily driver – it is a very solid performance package for those who can foot the bill.

Mike Santo wrote on June 4, 2015 - 1:53pm Permalink
207 mph....NO roll cage and no 5 point harness...just wearing the OEM seatbelt!! Let me tell you that's the most irresponsible stunt I have seen from a so called 'professional' If he lost a tire at 185-207 mph.....lets just say things would have got interesting, especially if he ended up off the road into that grass, he would have cart-wheeled that car and it would most likely rip itself to pieces along with the retard inside!! Make Fat John go 200+ next time with no cage or harness!!!