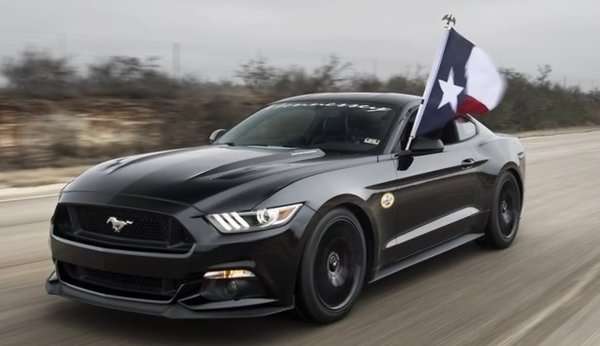 The folks at Hennessey Performance have added their HPE700 package to a 2015 Ford Mustang GT, and the result is a blue oval-clad pony car that will cruise up past the 195 mile per hour mark – and they made a video showing the amazing run.
Advertisement

We spend a great deal of time talking about the high performance, high speed projects of Hennessey Performance and owner John Hennessey, but over the past couple of years, all of our Hennessey talk has focused on their efforts with GM products like the new Corvette and his crazy fast Cadillac CTS-V. However, the newest Hennessey Performance video features the 2015 Ford Mustang GT, which has been fitted with the Hennessey HPE700 package and sent onto a test track to see what kind of top speeds could be reached.

The results were very, very impressive.

The HPE700 2015 Mustang GT
The 2015 Ford Mustang GT is powered by a 5.0L V8 that delivers 435 horsepower and 400lb-ft of torque, which affords the newest muscle car a top speed of 164 miles per hour. The Hennessey Performance HPE700 package for the 2015 Mustang GT adds a 2.9L supercharger, bigger fuel injectors and a custom engine calibration, which increases the output to 717 horsepower and 632lb-ft of torque. The HPE700 Mustang GT package is capable of moving out from a stop to 60 in just 3.6 seconds and it will run an 11.2 quarter mile at 131 miles per hour. Click here for a closer look at the HPE700 package for the 2015 Mustang GT.

Those are all awesome numbers, but Hennessey wanted to find out what kind of top speeds this 717hp Mustang GT was capable of, so the team drove the car to the Continental Tire test track to see how fast this monster can go. It should be noted that the HPE700 package also includes a CarbonAero front splitter, CarbonAero side sills and a CarbonAero rear lip spoiler, so in addition to the bigger power, this Mustang has slightly better aerodynamic properties – another factor which should help the top speed capabilities.

The HPE700 Mustang Top Speed Video
This video showing the HPE700-equipped 2015 Ford Mustang GT in action starts off like more of a Pennzoil commercial, and we are reminded regularly throughout the video that this Mustang is running Pennzoil oil. Pennzoil badges on the sides and rear of the car. Pennzoil logos all over John’s race suit and helmet. They even show the team adding oil before the top speed run and, of course, it is Pennzoil.

Fortunately, the not-so-subtle Pennzoil branding doesn’t take away from the most interesting parts of this video, when the HPE700 Mustang hits the track at about the 2:20 mark. After a handful of incredible flyby shots of the Mustang GT getting up to speed, the video jumps to the in-car, where we ride along as John Hennessey makes his high speed run. We watch as the muscle car blasts down the 1.1 mile straightaway of the test track and a component speedometer shown in the corner of the video keeps us posted on the speed.

The video ends with a handful of high speed flyby shots and during these, the Hennessey Mustang sounds absolutely awesome. It sounds like a jet going by at almost 200 miles per hour so before watching the video, make sure that you are able to crank up your speakers.

Also, take note of John’s comments at the end of the video – and stay tuned for another video showing the Hennessey tuned 2015 Mustang GT topping 200 miles per hour.