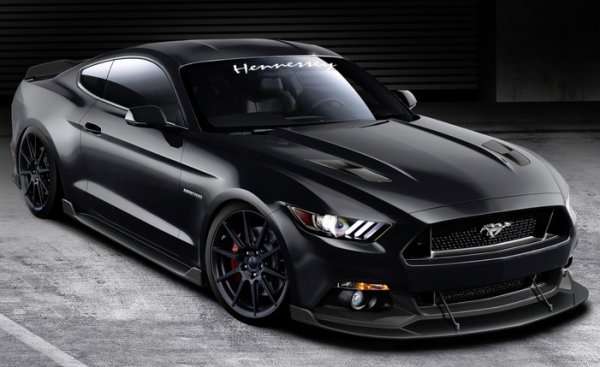 The first information on the Hennessey tuned 2015 Ford Mustang HPE700 have hit the internet and while it is the most powerful next generation Mustang we have seen thus far – the official performance numbers still fall almost exactly even with the official performance numbers for the heavier and less powerful Dodge Challenge SRT Hellcat.
Advertisement

Since the 2015 Dodge Challenger SRT Hellcat was formally introduced with 707 horsepower and 650lb-ft of torque, Ford fans have been demanding a version of the new 2015 Mustang that could rival the Mopar muscle car. So far, Ford Motor Company hasn’t rolled out a premium performance Mustang, but the folks at Hennessey Performance have offered up their take on the next generation pony car and with 717 horsepower – the HPE700 Mustang packs more official power than the Hellcat Challenger.

The 2015 Ford Mustang Hennessey HPE700 Package
The Hennessey HPE700 package begins with the standard 2015 Ford Mustang GT and adds a collection of modifications to increase the power from 435hp and 400lb-ft of torque up to 717hp and 632lb-ft of torque. This was achieved by adding a twin screw supercharger, a new throttle body, an upgraded fuel system, a high flow exhaust system and a unique engine tuning package. The minimal number of modifications and the incredible output of the Hennessey-tuned Mustang GT show just how great the new 5.0L Ford V8 is, but far more importantly – that output makes the Hennessey Mustang more powerful than the Hellcat Hemi in terms of horsepower while the Challenger maintains the advantage in torque. Hennessey Mustang VS Hellcat Challenger
So the 2015 Hennessey HPE Ford Mustang packs 717 horsepower and 634lb-ft of torque while weighing slightly less than the Dodge Challenger SRT Hellcat with 707 horsepower and 650lb-ft of torque. With the power ratings being so similar while the Mustang likely weighs considerably less, you might think that the Hennessey Mustang would blow the big heavy Hemi away in a straight line race.

You would be wrong.

According to Hennessey, their HPE700 Mustang will dash from 0-60 in 3.6 seconds while running through the quarter mile in 11.2 seconds. The Hellcat Challenger can go from a stop to 60 in 3.5 seconds while also running the quarter mile in 11.2 seconds so while the advantage is basically non-existent, the tuned Mustang doesn’t have the performance advantage that many may expect from the lighter Mustang.

The Good News and Bad News on the Hennessey 2015 Mustang
All of the features above are included in the 2015 Ford Mustang Hennessey HPE700 package and including the price of the 2015 Mustang GT, you can have this 717hp Mustang for the stunningly low price of $59,500. While these aftermarket tuning packages typically have their pricing stated without the cost of the base car, that price includes the thirty-some thousand for the base Mustang GT and all of the goodies needed to make 717hp. However, that price does not include the Hennessey wheels or the Hennessey CarbonAero body kit that adds that awesome front splitter, the deep reaching side sills, a rear diffuser and a rear lip spoiler. That price does, however, include the Hennessey badging inside and out, serialized engine bay and dash plaques and a 3 year, 36,000 mile warranty. Im not sure how much the Hennessey wheels and body kit costs, but there is no question that the car in the images shown here looks incredible so that CarbonAero body kit is almost a must. The bad news is that Hennessey only plans to make 500 examples of their HPE Mustang for 2015 so if you want a 2015 Mustang with a warranty that will comfortably go toe to toe with the Hellcat Challenger, you should contact Hennessey Performance ASAP as these 500 cars are sure to go fast.