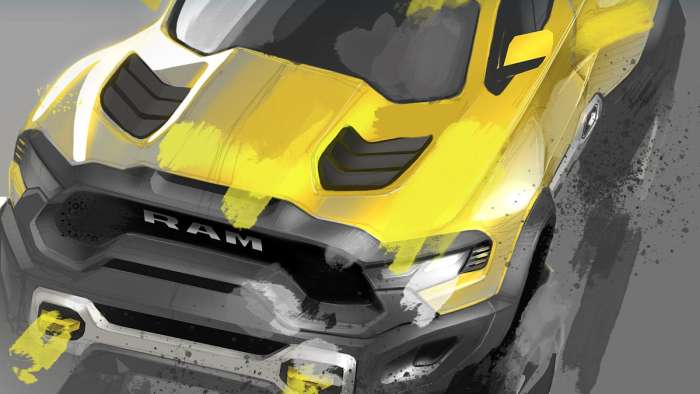 Hellcat-Powered Ram 1500: Not Likely to be a Two-Door

The artwork showing the Ram 1500 TRX Rebel on the poster for the FCA high school design contest has some people thinking that the Hellcat-powered pickup will have the regular cab design, but upon closer inspection, we don’t think that is the case.
Advertisement

Last week, we brought you a look at the Ram 1500 on the poster of the FCA Drive for Design contest. This contest invites high school students who are interested in automotive design to create their vision of the next generation Ram truck. Since the Ram truck is the focus vehicle, the promotional poster features a Ram truck, but not just any Ram truck. Based on our side by side comparison, this yellow Ram 1500 is the Hellcat-powered TRX Rebel.

Click here for a comparison of the details between the 2016 Ram 1500 TRX Rebel Concept and the yellow truck on the poster.

That piece generated a ton of interest on social media and some people questioned whether the yellow Ram 1500 on the poster is a regular cab model. We see how they may have thought that, but upon closer look, we believe that it is a four-door model.

Hellcat Ram Body Design
Many people have been hoping to see a two-door Hellcat-powered Ram 1500 and the artwork does appear to have a short wheelbase. That has rekindled the hopes of a regular cab, short bed half-ton pickup with Hellcat power. However, I believe that the proportions of this yellow truck are affected by the angle and by the fact that it is a drawing. Also, if you look closely, there is a line that is roughly halfway between the front and rear fenders that we believe is intended to separate the front and rear doors in the drawing. I have highlighted the line with red arrows in the picture below. 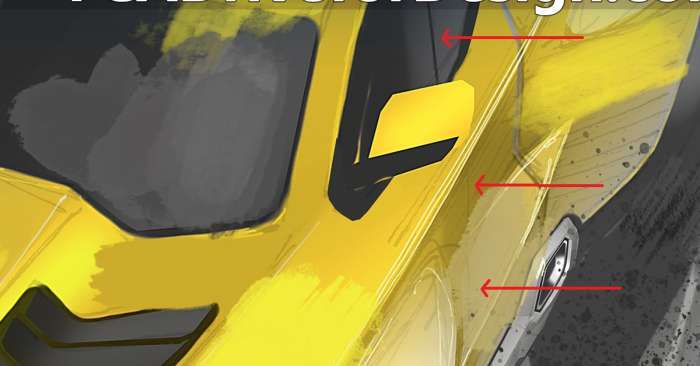 While many fans of Dodge and Ram trucks would love to see a modern take on the SRT10 Ram – a two-wheel-drive street truck with Hellcat power – all signs point to the high performance Ram 1500 being an off-road machine. The TRX Rebel, if they go with that name for production, with be designed to beat the Ford F-150 Raptor, which is only offered in four-door configurations.
Combined with the fact that the current generation Ram 1500 doesn’t have a regular cab version and the fact that the 2016 TRX Rebel concept was a four-door model, the odds are very good that the Hellcat Ram will be a four-door.

I’m not saying that there is no chance of ever seeing a two-door Ram with Hellcat power, but I wouldn’t hold my breath waiting for that truck. When the production truck arrives with the supercharged Hemi, it is almost certainly going to have four doors, but it is still going to be the most powerful production road truck ever.

Low Demand for Two Doors
The current generation of the Ram 1500 is not offered in a two-door, “regular cab” configuration. The “Ram Classic” is offered in two-door form with the 6’4” bed in Tradesman and Express trim. The Ford F-150 is only available in two-door form in XL and XLT trim. The Chevrolet Silverado 1500 and GMC Sierra 1500 are only offered with two doors in their base “work” trim. Even though there are two-door models offered by Ford, Chevy and GMC, those trucks are rarely in stock and when they are, they are relatively bare-bone models.

When we have talked to representatives from the Ram brand, they explained that the demand for a two-door truck is very low. FCA wants to sell as many Hellcat-powered pickups as possible, so the brand will focus on designs that appeal to the most people. The market shows strong favor for four-door trucks, so like the Raptor, the Hellcat Ram is likely to exclude the two-door option. When we ask about the current generation Ram 1500 with the two-door design, we were told that the company isn’t offering a regular cab model right now. They don’t say that it is not going to be offered, it just isn’t offered right now, leading us to believe that there will be a regular cab, half-ton Ram at some point.

However, I would be blown away if the Hellcat-powered Ram 1500 helped introduce the two-door Ram for the current generation. It would be cool, but based on everything that we have heard from company representatives and our inside contacts, the production version of the TRX Rebel will have four doors.