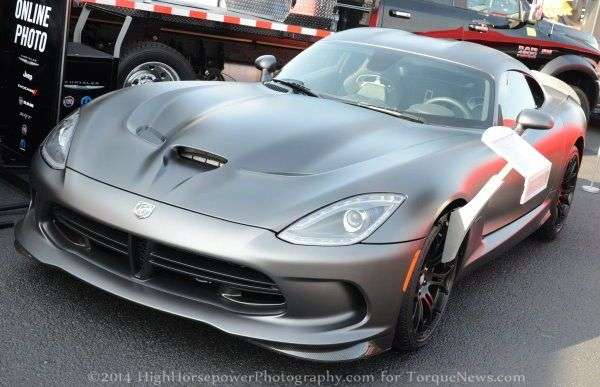 The Hellcat Automatic Transmission Could Save the Dodge Viper

Sales of the Dodge Viper SRT have gotten bad enough that the Chrysler Group has extended production downtime, leading many to question the future of the Mopar supercar but I have the solution – put the automatic transmission from the Challenger and Charger Hellcat in the Viper.
Advertisement

Realistically, I don’t think that the Dodge Viper SRT is going anywhere. Even with relatively balmy sales figures, I expect that the Chrysler Group will continue building and selling the Viper well into the foreseeable future. However, not everyone agrees with that view and those skeptics are constantly asking what needs to happen for the Viper to move enough units to keep the original American supercar alive. If nothing else, I believe that simply adding an automatic transmission option to the mighty Viper would help Dodge sell significantly more and thanks to the new 8-speed TorqueFlite automatic in the Hellcat powered Charger and Challenger – the company already has a very good, very strong self-shifting gearbox in their arsenal.

When the new SRT Viper was rolled out a few years back, the Chrysler Group didn’t have an automatic transmission that would shift fast enough or put up with the massive amounts of power created by the V10 engine. However, the new heavy duty 8-speed TorqueFlite automatic transmission in the 2015 Challenger SRT Hellcat and the 2015 Charger SRT Hellcat can handle the 707 horsepower and 650lb-ft of torque so it can obviously handle the Vipers 645hp and 600lb-ft of torque. More importantly, having driven the new Hellcat Challenger with the 8-speed automatic transmission, I can attest that it most certainly shifts hard enough and quick enough to “work” for a high performance car like the Viper.

Why an Automatic Transmission Will Help
While I would like to demand that all supercars come with a proper manual transmission, the sad truth is that less and less people can operate a manual transmission so the number of people who can actually drive the Viper – and drive it well – is far lower than it would have been back in the day. When you consider the types of people who buy supercars, the vast majority of them are either old people with lots of money or celebrities with lots of money. Sure, you have the group of folks who buy the Vipers now who can actually go out and drive them hard, but they are an ever shrinking minority. Old rich people have bad knees that make it hard to drive a manual transmission and rich people – the Paris Hilton types – are simply too uncoordinated to deal with the third pedal. These rich old people and clumsy celebrities who cannot drive a manual transmission will instead opt for one of the newer supercars from Ferrari, Lamborghini or even Chevrolet that come with a self shifting transmission…while avoiding the Viper due to the standard manual transmission.

Also, in addition to catering to the uncoordinated and physically disabled crowds, the addition of an automatic transmission to the Dodge Viper SRT lineup will allow owners to make the most of the Mopar supercar. So far, the best performing Hellcat Challenger packs the 8-speed automatic transmission so in equipping the Viper with the same TorqueFlite transmission as the 707hp Challenger, the Viper would be quicker and easier to drive. Even with those Viper owners who are skilled with the manual transmission, there is a good chance that a self-shifting Viper will beat out a similar car with the 6-speed Tremec gearbox. Also, having been to more than a few drag racing events with a Viper class, Ive seen more than a few really poorly driven Vipers that struggled to get into the 12 second range…having an automatic transmission would prevent many Viper owners from embarrassing themselves and the Viper community by struggling to get down the quarter mile.

While I believe that a proper sports car should have a manual transmission, the trend of the industry caters to those folks who cannot deal with the third pedal so to help improve Viper sales – the SRT engineers should really consider adding the 8-speed automatic transmission from the Hellcat Charger and Challenger to the Viper lineup in the near future.

B5Woody wrote on September 13, 2014 - 11:16am Permalink
Amen. It is time for all heel/toe heroes to stop the snickering and embrace the technology. How many times have we heard "if you don't know how to drive x, you shouldn't buy x"? Guess what, they aren't buying. And where is that going to leave the rest of us? Without a true American super car, that's where.
Alex The guy wh... wrote on November 21, 2014 - 3:59am Permalink
The SRT big dog gilles said there isnt an auto transmission that they have already or out there, that could work with the car. No room i think he said. im sure they could develop something if they wanted to sell out, but they won't for now. He said they plan to keep it a purists car, while acknowledging that an auto would drive up sales.
marcello wrote on August 17, 2015 - 2:22pm Permalink
Any super car uses paddle shift auto transmission on these days.. so, what is the real problem using the Hellcat trans on the Viper?.. I don't think there's any problem at all, he just don't want to spend (or invest) any extra penny on Viper.. and the car now will be death (probably forever)
donny wrote on February 8, 2015 - 6:38pm Permalink
Totally been in the market for a new SRT since launch, but purchased as most have done a vette as available in auto. I drive in a lot of traffic I simply will trade to a viper the moment it is available in auto. SRT are really missing a trick here and losing countless sales as no choice of auto.
Wes wrote on May 25, 2016 - 5:20pm Permalink
Agree. Finally someone said it. The head of business at dodge needs to pull his head out of his ass and put an automatic transmission in the dodge viper. This is 3rd grader logic
David B King wrote on May 26, 2017 - 3:58pm Permalink
Common sense says, put an automatic in it. Your in business to make sales, not lose them. You wouldn't lose any true automotive purist. Not with the Hellcat Transmission....
gleng42 wrote on May 13, 2019 - 4:18pm Permalink
The Viper is gone and the rest of Dodge and Chrysler aren't far behind. The value to FCA is Ram, Jeep and Pacifica because of autonomous driving down the road. I would have bought a new Challenger convertible a few years ago if they made one. Thinking of a used Viper if can convert to auto.