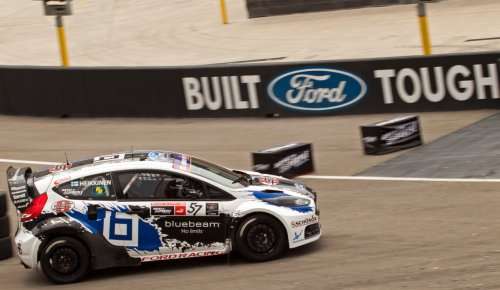 The Global RallyCross racers took to Bristol Motor Speedway this past weekend and Toomas “Topi” Heikkinen did what no GRC driver has ever done – winning his 3rd consecutive race in dominating fashion while also taking a massive lead in the run for the 2013 Global RallyCross Championship.
Advertisement

After having just over a week off, the drivers of Global RallyCross took to the steep banking of Bristol Motor Speedway for the 5th race of the 2013 season. After Topi Heikkinen and Liam Doran battled for the win in the second race at the Munich X Games, Bristol would serve as the rematch between these two young, aggressive drivers after Doran missed the New Hampshire race a week earlier. While Doran looked to avenge what he believed was a dirty move by Heikkinen in Germany, Topi was looking to be the first driver in GRC history to win three races in a row. In the end, Doran proved to not be a factor as Ken Block and Topi Heikkinen were the only drivers truly in contention for the final round win.

In the first heat race of the day, Ken Block, Brian Deegan, Tanner Foust, Topi Heikkinen and Bucky Lasek took to the track. After a clean start by all, Block, Foust and Deegan battled hard through the first turn and as the field entered the tight second turn, there was a ton of contact that left Tanner Foust spinning and Ken Block was able to grab the lead. Block, who was the fastest driver in qualifying, spent the next 6 laps driving to a very easy win while the real race was for second. Deegan held second for a several laps until Topi muscled his way past on the 5th lap – securing his place in the final and sending Deegan to the Last Chance Qualifier.

The second heat race of the day saw Liam Doran, Patrik Sandell, Timur Timerzyanov and Dave Mirra fighting for the top tickets to the finals. Patrik Sandell got a great start and took the early lead with Doran and Timerzyanov in 2nd and 3rd. When Doran took the mandatory joker lap, Timerzyanov was able to grab the second spot but later in the race when Timur took Travis Pastrana’s #199 Red Bull Dodge Dart into the joker chicane – he spun the car around and handed away his chance at the finals to Liam Doran and his Mini. Sandell was never opposed for the win and Doran cruised to second while Timur and Mirra were sent onto the LCQ.

The third and final heat race of the Bristol GRC event brought out Scott Speed, Steve Arpin, Bryce Menzies and Sverre Isachsen. Scott Speed got a great launch and took the early lead but when Sverre Isachsen and Steve Arpin got into a wrestling match as the field entered turn 2 – Speed was the loser as he was shoved wide of the turn. During the melee, Bryce Menzies was able to grab the lead with Isachsen running second but the second spot was transferred to Steve Arpin when Isachsen took his Subaru through the joker chicane early on. Arpin and Menzies spent the next few laps trading paint as they battled for the lead until Arpin pulled his Ford around the Red Bull Dodge heading into the first turn on the 4th lap. Menzies would reclaim the lead when Arpin went through the joker turn and Isachsen tucked himself into second but on the final lap of the heat, Menzies was passed by both Isachsen and Arpin when he went through the joker chicane. This sent Isachsen and Arpin into the finals while Menzies and Speed were forced to settle for the LCQ.

In the Last Chance Qualifier, seven cars lined up including those driven by Menzies, Deegan, Timerzyanov, Speed, Lasek, Mirra and Foust with reigning series champ Tanner Foust starting alone in the 3rd row. All 7 cars got off to a great start but when Brian Deegan took an interesting approach to turn 2 and the field got all bottled up, Foust was able to sneak into the second spot. There really wasn’t much racing in the LCQ as Deegan comfortably cruised to the win while Tanner Foust took the second transfer spot and Timerzyanov took the third sport with his Dart. That left Bryce Menzies, Dave Mirra, Bucky Lasek and Scott Speed on the outside looking in for the finals.

In the Bristol GRC final race, the field got off to an amazing start that saw a four wide race through the first turn that resulted in a huge mess in the narrow first turn. Out of that melee came Topi Heikkinen in first followed by Isachsen, Arpin, Block and Deegan but Ken Block quickly worked his way up into the second position. The bad news for Block was that during the mess in the second turn of the race, Heikkinen was able to pull out to a gigantic lead of almost four seconds. Block would spend the entire race trying to chase down Topi but even when Heikkinen took the “long cut” joker turn, the gymkhana superstar couldn’t get close enough to really challenge Topi for the lead. In the meantime, Block and Topi turned a long series of amazingly fast laps – fast enough that they were able to lap the fourth and fifth place cars on the second to last lap. Topi cruised to victory with Block in second and Deegan in third. The only other two cars on the track at the end were Sverre Isachsen and Patrik Sandell who were each one lap down.

Liam Doran’s matchup with Topi never happened as the Brit failed to finish the first lap. Things were only slightly less terrible for Timer Timerzyanov who left the track after just one lap while Tanner Foust bowed out on his second lap of the race. Steve Arpin also left early after running into troubles on the third lap.

After winning his 3rd straight Global RallyCross race, Topi Heikkinen now holds a massive 34 point lead in the 2014 championship run over Brian Deegan with 4 races left on the season. Tanner Foust has dropped to 3rd in points, one point behind Deegan while Patrik Sandell and Ken Block round out the top 5.

The Global RallyCross drivers next take to the track on August 4th as part of the Los Angeles X Games.