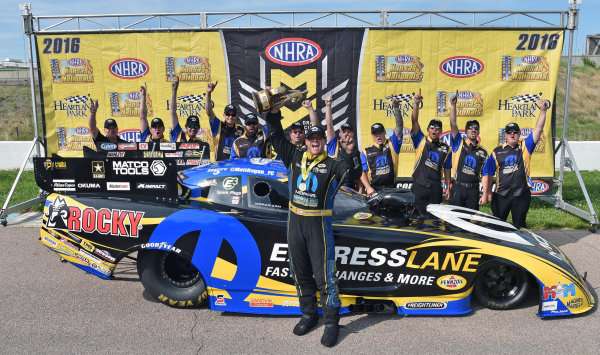 Matt Hagan and his Dodge Charger-driving teammates from Don Schumacher Racing rolled into Topeka for the 8th event of the season looking to back up their win last weekend and Hagan kept the good times rolling – setting new funny car ET and speed records while taking his second straight event win.
Advertisement

Matt Hagan and his 10,000 horsepower Dodge Charger funny car got off to a slow start for the 2016 NHRA racing season, but he got back into his winning ways last weekend in Atlanta. Hagan looked to build on that success and he did so in a big way, not only winning the event, but also setting new records for the quickest ET and the fastest trap speed in the history of the funny car class.

Qualifying
The Don Schumacher Dodge Charger funny car teams got off to a fast start in Topeka, with all four of the team cars running a time of 3.95 or better and speeds of 321 miles per hour or better. Fast Jack Beckman was the quickest Charger early on with a 3.891 at 332.59, which set a new funny car speed record, but that time wouldn’t stand for long as the top of the funny car class.

In the second round, 7 drivers laid down runs quicker times than Beckman’s first round 3.89, but the most important battle came between Matt Hagan and Alexis DeJoria. DeJoria’s Toyota Camry laid down an impressive run of 3.875 at 332.18 miles per hour, but she lost to Hagan’s 3.862 at 335.57 miles per hour. That run by Matt Hagan’s Charger set the national record for the funny car class for both the quickest ET ever and the fastest trap speed ever on the 1000 foot track.

That is 0-335 miles per hour in 3.862 seconds, and that run put Hagan atop the field. Beckman would post a 3.866 at 332.59 to grab the second spot at the end of the round, but Hagan’s time allowed him to hold onto the top qualifying spot through the slower 3rd and 4th rounds of qualifying. Hagan and Beckman were 1 and 2, Tim Wilkerson and his Ford Mustang grabbed the 3rd spot and Courtney Force’s Camaro was the 4th quickest. The other Don Schumacher drivers – Tommy Johnson Jr and Ron Capps – qualified in the7th and 8th sports, respectively.

Hagan took on Force and when her Camaro lost traction, Hagan’s Charger took the win while in the other half of the bracket, Tim Wilkerson’s Mustang broke – handing Jack Beckman the easy win. However, Fast Jack didn’t go easy, turning in the best run of the round and earning himself lane choice in the finals.

Hagan pulled an early hole shot advantage and Beckman immediately smoked the tires. Around half track, Hagan smoked the tires and without being able to see where his competitor was on the track – Hagan continued to battle for traction with the greasy tires as he took the win. In the end, the two quickest funny cars ever laid down a 5.724 at 179 miles per hour and a 6.560 at 146 miles per hour.

Championship Standings
With his second win of the year, Matt Hagan has jumped up into the 4th spot in the funny car championship standings. Courtney Force leads the race, followed by Jack Beckman (12 points back) and Tim Wilkerson.
The teams are off this weekend before getting back onto the track June 3rd through the 5th for the New England Nationals.