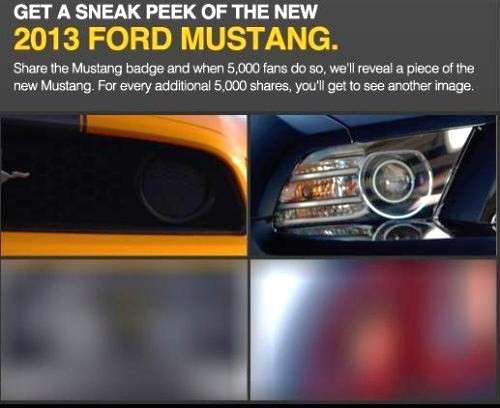 While spyshots of the 2013 Ford Mustang and 2013 Mustang GT have left little to the imagination, the folks at Ford Motor Company are slowly offering a quartet of tightly cropped teaser shots on one of the company’s Facebook pages – so far offering the world a look at the grille of the 2013 Mustang Boss 302 and headlight of the refreshed pony car with two more images on the way.
Advertisement

Ford has offered the graphic on the right with four pictures of the 2013 Ford Mustang blurred to the point that it’s hard to tell what you are really looking at but each time 5,000 people share the Mustang badge, FoMoCo will unveil one of the images. As you can tell from the image shown here, you can see that two of the four images have become clear so we have our first official look at the grille and headlight of the 2013 Mustang thanks to the Facebook badge being “shared” over 10,000 times. Once the share meter (click here for a look at the meter) reaches 15,000, the next image will be unveiled and 20,000 shares will bring all four of the pictures into focus.

The first image of the 2013 Ford Mustang appears to be the 2013 Mustang Boss 302 with the black section holding an egg crate grille treatment with the same foglight deletes that we see on the current (2012) Mustang Boss 302. Previous spyshots captured showing a Ford information panel with a look at the next Boss 302 showed new stripes and this first official 2013 Mustang teaser carries a central stripe along with the Boss 302 grille that leads us to believe that this is the new Boss. The bigger news for this image is the shape of the grille, which has a protruding central grille that has been borrowed from the 2011 Shelby GT500. The current Mustang V6, GT and Boss 302 have a hood that extends out over the grille where the current GT500 has a grille area that runs to the top of the front fascia with the hood starting a few inches back from the front of the car – a move which helps to improve aerodynamics. There has been speculation that the 2013 Mustang GT wouldn’t get the grille mounted foglights that the current Mustang GT has but based on this first official teaser, it looks like those large foglights might still be offered. That, or the 2013 Mustang Boss 302 will still have the same grille as the current special edition models and the Mustang GT will go a different direction but overall, the current Boss is a modified version of the GT and we would expect that to be the case for 2013 as well.

The second teaser of the 2013 Ford Mustang offers us a look at the headlight of the new pony car but there doesn’t appear to be much difference from the headlights offered on the current Mustang. This image shows the optional projection headlights so this confirms that these high tech headlights will once again be offered but we will have to wait to find out which models get them, and if they are still optional or if they become standard across more trimlines.

Again, you can click here for a look at the group of images of the 2013 Ford Mustang on the Ford Mustang Facebook page and sharing the Mustang badge will help hurry the process of unveiling more images!

Stay tuned to TorqueNews.com for more coverage of the strip-tease of the 2013 Ford Mustang and all of your breaking news from around the automotive world, including live coverage from this week’s 2011 LA Auto Show!