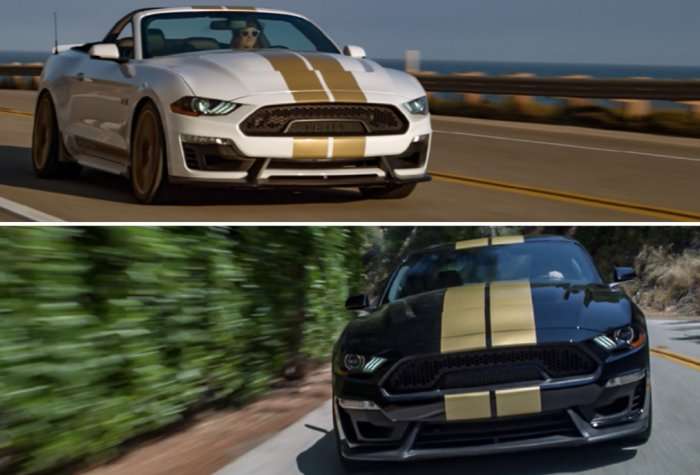 Shelby American used the 2018 Woodward Dream Cruise to reintroduce the Shelby GT package for the Ford Mustang, packing 480 horsepower into a uniquely-decorated pony car with a price starting at $61,345.
Advertisement

Leading up to the 2018 Woodward Dream Cruise, the folks at Shelby American began teasing a debut at the gigantic Detroit automotive event and with the debut being set for Mustang Alley in Ferndale, many people expected a high performance pony car. In some cases, show-goers hoped to see the long-awaited debut of the new GT500, but that is a Ford product – not a product of Shelby American. I had guessed that it would be the debut of something like a new Super Snake package, but instead, the Vegas-based Ford performance experts rolled out the newest Shelby GT.

After taking two model years off (2017 and 2018), the Shelby GT package for the Ford Mustang GT is back with a distinct look inside and out, along with improved handling and more power than the standard Mustang GT.

Shelby GT Performance
The upgrades of the 2019 Shelby GT package start under the car, where a Borla exhaust system and an engine tune lift the output from 460 to 480 horsepower. There is also an optional supercharger package that brings the final power number up to 700, but for the “basic” Shelby GT, 480 horsepower is standard. This engine is allowed to breathe a bit better thanks to the Shelby “deep draw” hood with integrated vents, helping to pull hot air from the engine bay.

Next, the package adds a Ford Performance handling package with new springs, sway bars and caster plates, along with 20-inch wheels and high performance tires.

Appearance Upgrades
Aside from the hood and wheels, the Shelby GT package adds new side skirts and rear rocker extensions, a new rear spoiler, a unique tail light panel and all of the stripes and badging shown in the picture above. On the inside, the package includes a numbered dash plaque that matches the numbered engine plate and embroidered Shelby floor mats.

The Hertz Package
Some of the best-known Shelby Mustangs are the old “rent-a-racers”, also known as the Shelby GT-H. The 2019 Shelby GT Mustang can be fitted with the GT-H Heritage package, which includes either black or white paint with gold stripes, a unique front fascia, unique shocks and struts, gold painted wheels and lighted door sill plates, along with everything mentioned above.

The Premium and Heavy Duty Packages
Those 2019 Ford Mustang Shelby GT buyers who don’t want their cars to look like they used to be rentals, but who want a more dressed-up car can opt for the Premium Package. This adds the unique front fascia, the Shelby door sill plates and the dampers from the GT-H package, but you don’t get the gold stripes and wheels or the package-specific badging.

Finally, if you plan on running your 2019 Shelby GT Mustang hard, the Heavy Duty Package might appeal to you. In includes an “extreme radiator”, a coolant tank, unique wheel studs and performance half shafts. Based on the components, this seems like something that a buyer who is opting for the 700 horsepower supercharger upgrade may want to consider.

Pricing
The standard 2019 Ford Mustang Shelby GT fastback with the 6-speed manual transmission starts at $61,345 and that includes the price of the Ford Mustang GT needed to create this custom pony car. If you want to add on the features of the Hertz package, the base price rises to $66,345. The company hasn’t announced pricing for the Premium Package or the Heavy Duty Package, but the Premium Package should be slightly less than the GT-H Heritage Package.

You can also order the Shelby GT with the 10-speed automatic transmission or in convertible form, but those will add to the bottom line. The automatic transmission likely costs around $1,600 while the drop-top likely adds somewhere in the area of $5,000, provided that Shelby’s pricing model follows Ford’s numbers.

Jeremy wrote on August 20, 2018 - 7:08pm Permalink
Once again Shelby American charges more than what you can get through your Ford dealership which is the GT350 and the GT350R which put out over 500 horsepower. A friend of mine wanted to take his 2014 GT500 to Shelby American to get it qualified for the Shelby registry access balked at the price at first and then read the fine print where they get to keep all the component tree that they took off so they can refurbish and resell the components. I will say the GT350 style bumper on that looks cool but at the same time not worth the price $61, 000 for 480 horsepower
DeanMcManis wrote on August 21, 2018 - 10:24pm Permalink
I share that opinion. The Shelby GT is nice, but it is more like an option package on a regular Mustang. The GT350 is the real-deal, for the same price. I can't help but think back to 2007 when the last Shelby GT came out, also with an extra 20HP, and stripes and such. And the dealers jacked up the price so that many of them were selling for twice the MSRP! And with the greedy dealer markups they were much more costly than even the GT500 was then. Today they are hardly the rare collector's items that the dealers promised, with pretty much the same value as a similar Mustang GT. It is nice to see that Shelby American is still in the game, but the factory cars are so much of a better value.