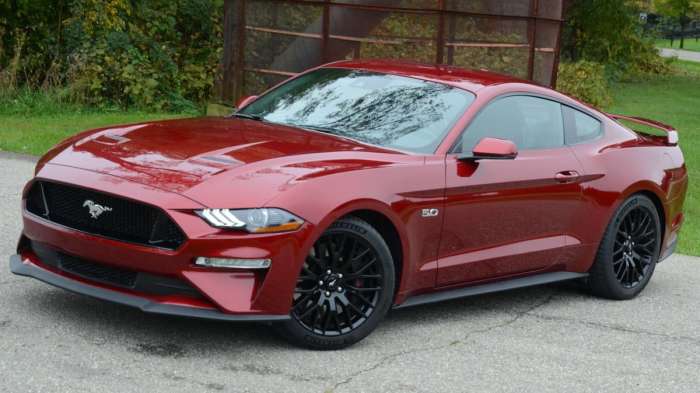 Sales numbers for December 2018 were announced this morning and for the 9th time during the calendar year, the Ford Mustang beat the Dodge Challenger in monthly sales while also securing a 4th-straight annual segment sales title – all while sales of the Chevrolet Camaro hit lows that we haven’t seen from any of the American muscle cars since 2012.
Advertisement

Although the Mustang posted its worst sales month since September 2014 last month, Ford still bested Dodge for a 9th monthly segment sales title in December 2018. More importantly, even though the Dodge Challenger was up for 2018 while the Mustang was down for the year, Ford still claimed its 4th-straight annual segment sales title, beating the Challenger by a comfortable margin while beating the Camaro by nearly 50%.

December 2018 Muscle Car Sales
In December 2018, Ford sold just 4,392 examples of the Mustang. That is the lowest monthly total for the Mustang since September 2014, but with the Dodge Challenger having one of its weakest sales months of 2018 with just 4,156 units sold, Ford was able to lead the segment in the final month of the year.

For those wondering about the Camaro, Chevrolet now published sales numbers on a quarterly basis rather than a monthly basis and with December marking the end of 4th quarter, we have some sales numbers for the Camaro.
Some very, very poor sales numbers.

Q4 Muscle Car Sales
During the 4th quarter of 2018, Chevrolet sold 11,135 Camaros, leading to a monthly average of just 3,712 cars sold each month. During the same period, the worst sales month for both the Challenger and the Mustang was December, so even on their worst month of the quarter, both Ford and Dodge crushed Chevrolet’s monthly average Camaro sales. Dodge actually led 4th quarter sales with 14,403 units sold, followed by the Mustang at 14,223.

I have a spreadsheet of muscle car sales numbers dating back to the beginning of 2012 and since then, the Camaro has never had a quarter where it sold so poorly. Also, for those readers wondering if Chevrolet buyers are simply leaning more towards the Corvette, the answer is no, as the all-American sports car is way down for the 4th quarter as well.

The Camaro is selling worse with each quarter, so it will be interesting to see what Chevrolet does to help stop the sales spiral that is happening while Dodge Challenger sales are increasing.

2018 Annual Sales Title
For the 4th year in a row, the Ford Mustang is the bestselling muscle car in America with a total of 75,842 units sold. The Dodge Challenger finishes second with 66,716 units sold – a record for the modern era of the nameplate and the first time since the Camaro returned for 2010 where the Mopar machine has finished second in the segment.

Finally, the Camaro sits in a distant third place with 50,963 units sold. Not only is that a shockingly low number compared to Challenger and Mustang sales this year, but it is shockingly low compared to all modern muscle car annual sales totals.

In addition to 50,963 being the lowest annual sales total for the Camaro since returning for the 2010 model year (not counting the short 2009 sales year), the last time that any of the three American muscle cars sold below 51,000 units was the Challenger back in 2012. In other words, the Camaro sold worse in 2018 than any of the American muscle cars have sold in the past six years.

Again, the Ford Mustang and many other popular models in other segments were down for 2018 as the American auto industry levels out from years of huge growth, but with the Mustang dropping by a small margin and the Dodge Challenger showing sales growth in 2018, there is no good excuse for the Camaro’s poor sales figures.

Elon Makes a Cybertruck Statement With an Action, But Quiet in Words
Tesla's Record Month in China: Doubled Registrations in March 2021
END_OF_DOCUMENT_TOKEN_TO_BE_REPLACED