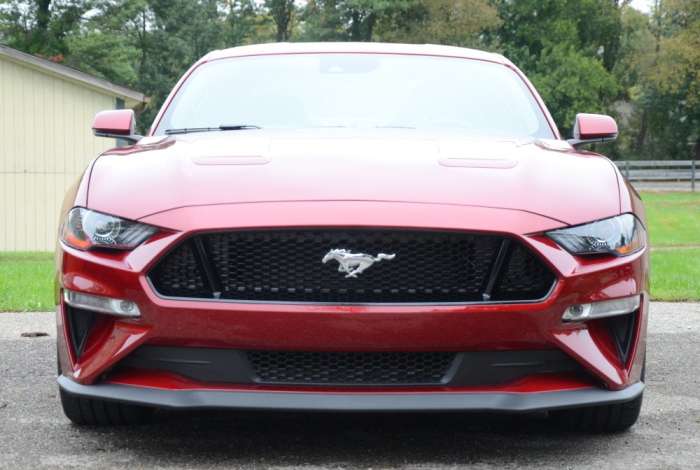 There are rumors floating around the internet that suggest that Ford Motor Company is working on a four-door version of the Mustang, but a Mustang-inspired sedan sounds like something that we can get behind – serving as an interesting challenger to the Dodge Charger.
Advertisement

The folks at Mustang6g.com recently shared information from a “major dealer event” that included details on a four-door Ford Mustang sedan. This initial report goes on to explain that this Mustang sedan will have a turbocharged V8 and that with this sleek sports sedan, the Motor Company will be taking aim at the likes of the Porsche Panamera or the Audi RS7.

Mind you, this comes after a new Ford commercial featuring Bryan Cranston revealed the front end of a mysterious vehicle with the Mustang’s running pony logo on the grille. I originally speculated that the unknown from end could be the upcoming Mustang-inspired, all-electric crossover, but perhaps it could be a new sedan based on the legendary pony car.

Mustang-Inspired Sedan
Many people in the automotive community are scoffing at the thought of a Mustang sedan, but what if isn’t a sedan version of the Mustang as much as it is a sports sedan inspired by the Mustang? Imagine a Ford sedan with a slightly longer wheelbase than the Mustang, with rear-wheel-drive and a turbocharged V8. In the same way that the Dodge Challenger and Charger work together to offer high performance fun to a wide range of buyers, the Mustang and a Mustang-inspired sedan could coexist in the same manner.

If the Motor Company introduces a turbocharged version of the 5.0-liter V8, the output could climb up into the 600 horsepower range to compete with the Porsche Panamera of the Audi RS7. That sounds great, but it would be expensive and likely built in low numbers, so it wouldn’t have broad appeal. However, if Ford also offered a version with the naturally aspirated 5.0-liter V8 from the current Mustang GT, this 460-horsepower package could have a price point to attract for more buyers. Add in a base model with the turbocharged four-cylinder and you have a full range of Mustang-inspired sports sedans that would be the first American car to really go toe-to-toe with the Dodge Charger.

Dodge has had and continues to have immense success from the rear-drive Charger, so it would make good sense for Ford to roll out a performance sedan of their own that is inspired by the Mustang.