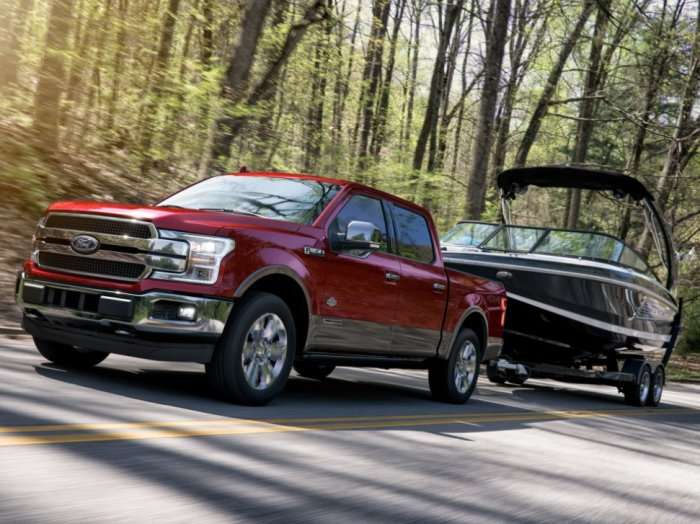 Since the new 3.0-liter diesel V6 coming to the Ford F-150 lineup was expected to be the most fuel-friendly in the segment and today it became official, with the half-ton PowerStroke pickup getting an official EPA rating of 30 miles per gallon on the highway – marking the first full-size truck to reach that plateau.
Advertisement

After the Ram 1500 with the EcoDiesel became the most fuel-efficient configuration in the half-ton segment, it has been expected that Ford’s small diesel would be engineered to claim the title as the segment’s best truck in terms of MPGs. Although the F-150 with the 2.7-liter EcoBoost led the gasoline-powered pickups, the Motor Company wanted to be the overall leader in half-ton fuel economy. Today, that goal was achieved.

“Even a few years ago, customers wouldn’t have imagined an EPA-estimated rating of 30 mpg highway would be possible in a full-size pickup, but our team of crazy-smart engineers rose to the challenge,” said Hau Thai-Tang, Ford executive vice president, product development and purchasing.

In rear-wheel-drive trim, the 2018 Ford F-150 with the PowerStroke diesel engine offers 22 miles per gallon in the city, 30mpg on the highway and 25mpg combined.

In four-wheel-drive trim retail models of the 2018 F-150, including Lariat and above, the PowerStroke-powered half-ton pickup achieves 20mpg in the city, 25mpg on the highway and 22mpg combined.

Finally, in the four-wheel-drive fleet models of the 2018 F-150, including the XL and XLT, the new diesel engine will return fuel economy figures of 21mpg in the city, 28mpg on the highway and 24mpg combined.

Segment Leading Fuel Economy
In the modern era of the half-ton pickup, never before has a truck achieved 30 miles per gallon, so in addition to leading the segment right now, this is effectively the most fuel efficient full-sized truck to date. The 2018 F-150 beats out the 2018 Ram 1500 with the EcoDiesel engine, which gets 27 miles per gallon on the highway.

Of course, it should be noted that we mention the fuel economy numbers for the 2018 Ram 1500 because the next generation Ram 1500 was introduced for the 2019 model year and those trucks are reaching dealers now. However, the EcoDiesel engine will be a late availability option and right now, we don’t have any numbers on the new half-ton diesel engine option from the Ram brand.

In the truck segment, it is a constant battle of one-upping the competitors, so when the EcoDiesel Ram 1500 arrives later this year, we expect that it will challenge Ford’s new PowerStroke, but in the meantime, the F-150 offers the best overall fuel economy figures in the full-size truck segment.

The 2018 Ford F-150 with the new PowerStroke diesel will begin reaching dealerships this summer.