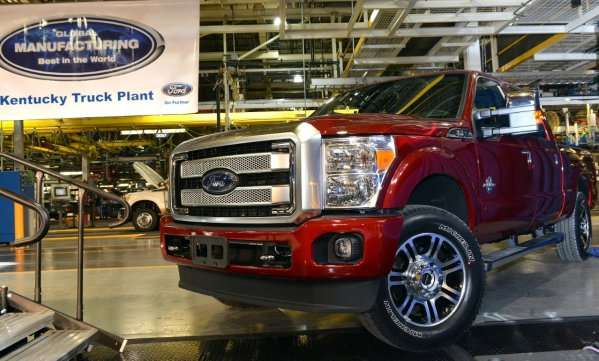 The Ford F Series is Ford Motor Company’s bestselling vehicle while also being the bestselling vehicle in the US auto industry for more than thirty years running and FoMoCo expects that the F Series will continue to grow. Thus, the massive American automaker has announced plans to increase production capacities for the Super Duty pickups by 15% - meaning that the company can build up to 55,000 more pickups each year.
Advertisement

While Ford Motor Company doesn’t offer specifics figures for the monthly and annual sales figures of the Ford F Series pickup, we know that the F150 is the bestselling option in the lineup followed by the F250 and F350 Super Duty pickups. Ford Motor Company sold 793,402 F Series pickups last year and even if only 15% of those were Super Duty models – Ford sold more than 119,000 F250, F350, F450 and F550 trucks during the 2013 calendar year.

Mind you, I pulled that 15% figure out of thin air simply to show how many Super Duty trucks Ford may have sold and the actual ratio of Super Duty pickups to half ton F150 pickups sold last year could be much larger than that 15%. Regardless of how many Super Duty trucks Ford sold last year, the company sees the need to build even more and to accommodate that effort – Ford is investing $80 million in the Kentucky Truck Plant to build more F Series Super Duty models starting later this year. To be exact, Ford expects to increase the output of the Kentucky Truck Plant by 15% and that accounts for 55,000 more units of their biggest trucks will be built once the expansion is complete.

"Customer demand for F-Series Super Duty trucks is growing substantially, and F-Series overall is America's best-selling truck for 37 years running," said Joe Hinrichs, Ford president of The Americas. "Building on more than 100 years of manufacturing in Kentucky, we are proud to expand our profitable growth in the region as a result of our leadership in trucks and SUVs."

By the way, if Ford’s 15% increase in production means that they will be able to build about 55,000 more F Series Super Duty pickups each year; that indicates that the company is capable of building around 367,000 heavy duty trucks a year right now. If Ford sees the need to increase capacity by 55,000 units, I would be led to believe that they are running thin on trucks available for consumers under the current production schedule and if Ford were to sell out of Super Duty pickups at the current rate – that means that roughly 46% of the 792,402 F Series trucks sold last year were Super Duty pickups.

Again, that is based on the idea that Ford is selling all of the Super Duty pickups built in a year during that year but even if that number is a bit off…it shows that way more than 15% of the trucks sold by Ford are of the Super Duty variety.

Ford Motor Company hasn’t gone into specific detail as to how that $80 million investment will be spent on the Kentucky Truck Plant but the automaker does state that the money will go towards supporting facility upgrades, retooling and increasing plant capacity. More importantly for the local economy in Kentucky, this investment will create 350 new jobs to help build these extra 55,000 Ford trucks.

"We are happy to be adding new jobs at Kentucky Truck Plant, because we know the impact these jobs will have on the local community," said Jimmy Settles, UAW vice president, National Ford Department. "It's especially rewarding to know these jobs come as a result of customer demand. It shows customers understand and appreciate the dedication our UAW Ford workers put into delivering top-quality products like Ford F-Series Super Duty."