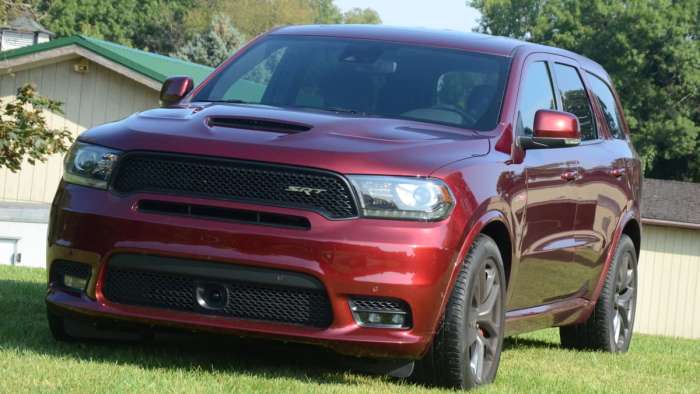 If you live in a snowy region of the United States and you want a single vehicle that is fun to drive for the entire year, the Dodge Durango SRT is an unrivaled bargain – offering the functionality of other large SUVs coupled with 475 horsepower.
Advertisement

The key feature of the Dodge Durango SRT is the 485-horsepower Hemi under the hood, but this roomy SUV is so much more than just a go-fast machine. While most people who pick this package will do so because of the muscle car-like performance features, it offers all of the functionality that someone could need from a year-round daily driver. It has a massive interior with a premium infotainment system with room for six people. It has a roomy cargo space, even with the third row seats in use, and with the rear seats folded down, it can haul as large of cargo as some trucks. Most importantly, it has all-wheel-drive, so you can drive in in the worst winter weather with confidence.

When considering the Dodge Durango SRT, you can look at it from two angles. The first is the performance angle, as with 475 horsepower, this SUV is one of the most entertaining driver’s vehicles on the market today. It is fast, it handles well and it brakes well, but realistically, most buyers will still focus more on the non-performance features of this big SUV. After all, while this is an SUV that can shine bright at the drag strip, the odds are good that most owners will spend more time sitting in traffic with the kids in the back than waiting in the staging lanes at the local drag strip. 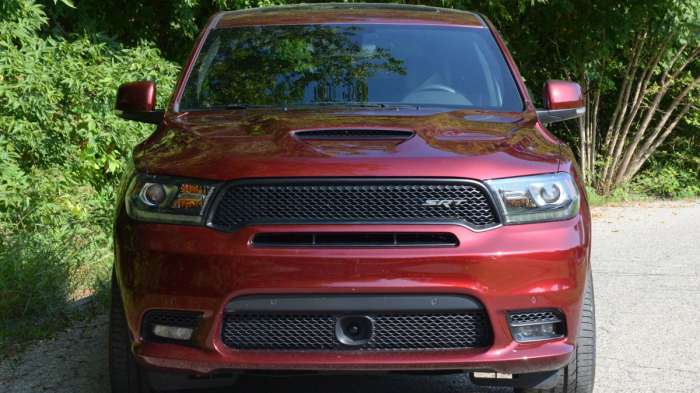 So, looking at the Dodge Durango SRT from the practicality angle, here are the five reasons why this is the best option on the market for someone who wants a high performance daily driver that can get the job done through harsh winters.

Big, Roomy Cabin
My 2019 Dodge Durango SRT came equipped with leather-and-suede wrapped front seats and similar captain’s chairs in the second row. All four of these seating positions are comfortable, with loads of space in every direction. All four seats are wide enough to be comfortable for just about everyone, but they do have some bolstering to keep the driver and passengers in place during stints of spirited driving. The third row is a bit tighter, as the seating position is higher than the second row, so there is a bit less headroom. There is also less shoulder and hip room, since both seats are between the rear wheels, but there is a surprising amount of legroom. Two friendly adults fit in the third row nicely, and while there isn’t an armrest to divide the seats, there is quite a bit of room within each seat. In other words, this is one of the more functional third row setups I have seen, and it will accommodate many adults as well as children. Some are only good for small kids, but the Durango SRT really can haul six adults in comfort. 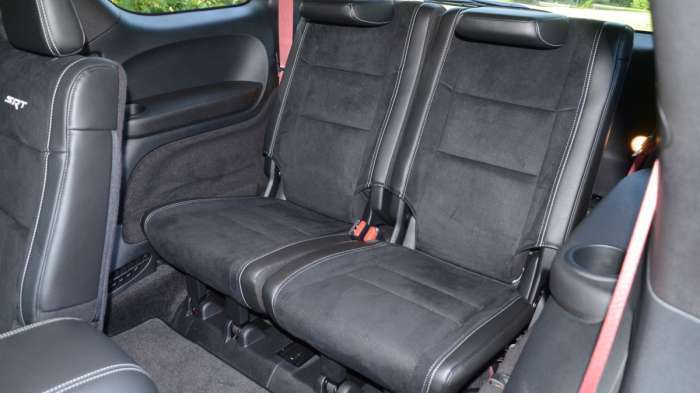 Behind the third row seats there is a cargo area that is large enough a couple golf bags, a couple hockey bags or a family’s-worth of luggage. There is more room than the average driver will use when driving around with five passengers, but if you have less passengers and the need for more cargo space, the third row seats easily fold down to create a much larger cargo area.

Premium Infotainment
Like all modern SRT products, the high performance Dodge Durango comes with the company’s award winning UConnect infotainment system. Featuring an 8.4-inch touchscreen, dedicated controls below that screen, more controls on the steering wheel and voice control, this is one of the most user friendly interfaces on the market today. You can control everything inside of the vehicle, from the heated seats and steering wheel to the navigation and sound system, all from the touchscreen. Everything is arranged logically, so the driver doesn’t need to hunt around to find the climate control screen while on the move. 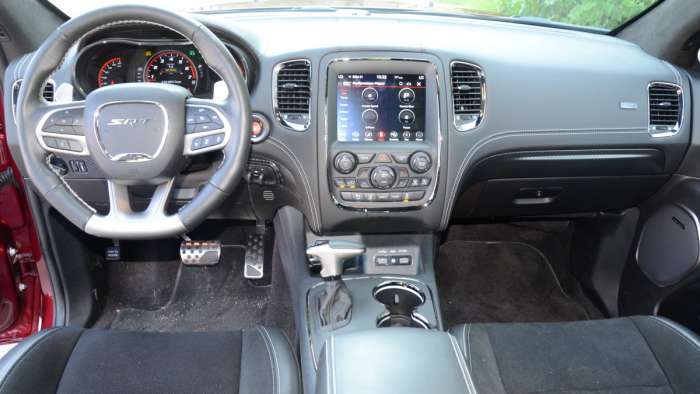 Also, while the touchscreen controls everything inside of the Durango SRT, there is a dedicated set of knobs and buttons below the touchscreen for both the sound system and the climate control. The driver can quickly turn the temperature up or down with a series of large buttons, while a big, chrome knob controls fan speed. There are also large knobs for the radio volume and the radio station, but the driver can control all of that with the buttons and dials that are built into the steering wheel.

The infotainment system of the Durango SRT also has a variety of applications built in, but my favorite is the SRT Performance Pages. This system displays acceleration timers, a variety of accessory gauges, a G-Force meter, an engine display with horsepower and torque, a dyno screen with historical engine output figures and a combo screen that can be customized to show various readouts. This is one of the most thorough performance readout systems on the market today, including everything from quarter mile and 0-60 times to detailed information on power output. 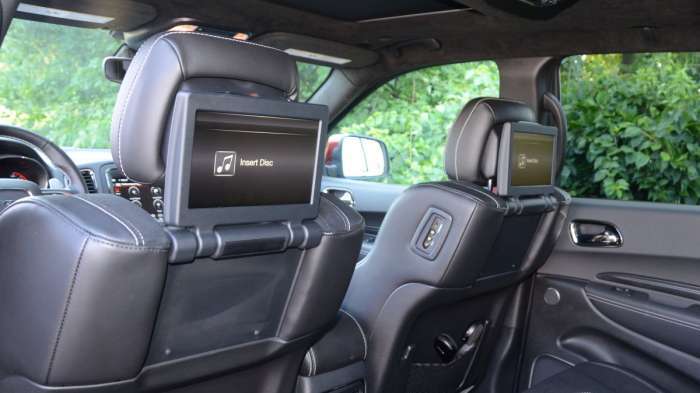 Also, my Durango SRT test vehicle was equipped with the second row entertainment package, which adds screens to the seatbacks of both front seats, along with dedicated headsets and inputs for each screen. It also came with the 19-speaker system from Harman Kardon, which is an absolute essential for anyone ordering one of these vehicles. As stock sound systems go, I love the SRT HK packages.

Impressive Working Abilities
Whether you tow a boat, a camper or even a car trailer, the Dodge Durango SRT can do the work on most situations. With an 8,700-pound towing capacity, the high performance SUV will pull many average boats, 2-horse trailers, mid-sized campers and car trailers. In fact, my own enclosed trailer with my Hellcat Challenger loaded up weighs less than 8,000 pounds, so the Durango will pull that while my 5,000-pound horse trailer is barely a challenge for the Hemi-powered SUV. More importantly, not only with the Durango SRT pull up to 8,700 pounds, but in my experiences, it handles the weight very nicely as well. Some SUVs with a smaller footprint on the road can sometimes feel like the trailer is pushing them around. The Durango SRT’s huge tires and performance suspension system have no issue with the extra weight out back and it should come as no surprise that the Brembo brakes have no problem getting the combination stopped with a few extra tons on the hitch. It should be noted that the Durango SRT comes with an integrated trailer brake controller, but for those older trailers that don’t have electric brakes, the Brembo brakes stop the combo weight nicely.

Having towed several different trailers with multiple Durango SRTs, I found that this high performance SUV handles the average trailer as well as any mid-sized pickups and even some full-sized models.

Year-Round Driving
When I tested the 2019 Dodge Durango SRT shown here, we had nice, fairly warm weather in Michigan. However, I have tested the high performance Durango in the snow in the past, and it performs beautifully. The advanced four-wheel-drive system handles deep snow and ice without any issue, even with all-season tires (rather than a dedicated snow tire) and even on rough, unpaved roads. 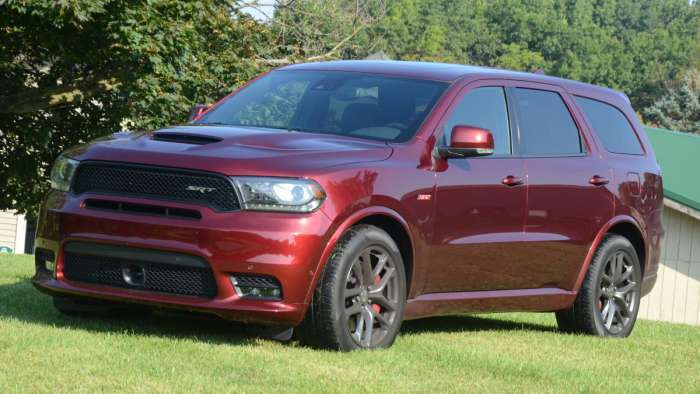 While the low-hanging body cladding will lead Durango SRT drivers to avoid any real off-roading conditions, the three-row Dodge SUV has the capabilities to cover loose footing, ice, deep snow and anything else that mother nature has to offer.

While it has 475 horsepower and a sport-tuned suspension setup, it is still a four-wheel-drive vehicle and it performs just as well as any other vehicle in the class – yet it packs almost 500 horsepower. Lots of SUVs and even some cars will offer similar winter driving capabilities, but few (other than the Jeep Grand Cherokee SRT) offer performance and the ability to comfortably handle heavy snow.

475 Horsepower, Sport Suspension, Brembo Brakes
Above, we looked at the four practical aspects of the 2019 Dodge Durango SRT that make it such a great daily driver for someone who lives in an area that sees snowfall in the winter. However, as mentioned above, there are plenty of vehicles that have roomy cabins, premium gadgets, the ability to tow and all-wheel-drive. What makes the Durango SRT better than all of those models are the SRT-specific features. 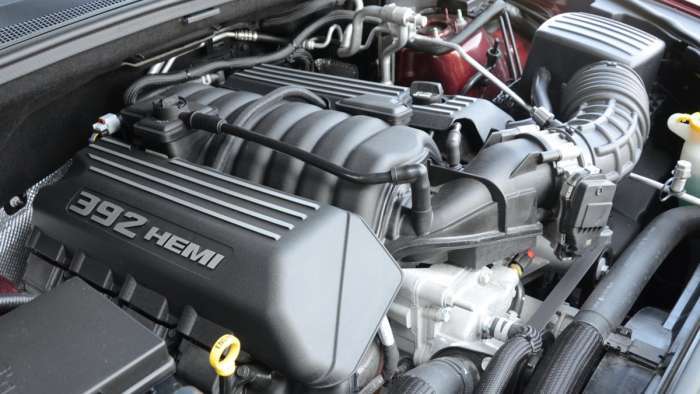 This includes the 6.4-liter Hemi with 475 horsepower, the quick-shifting 8-speed automatic transmission, the adaptive, adjustable, sport-tuned suspension setup and the huge Brembo brakes at all four corners. What makes the Durango SRT so great is that is does everything else that other SUVs – and many trucks – do well, but it does all of that while packing impressive high performance features.

Among three-row SUVs, there is no vehicle in the world that will accelerate, handle and brake as well as the Durango SRT, but at the same time, this high performance package doesn’t require owners to compromise any of their normal SUV expectations. 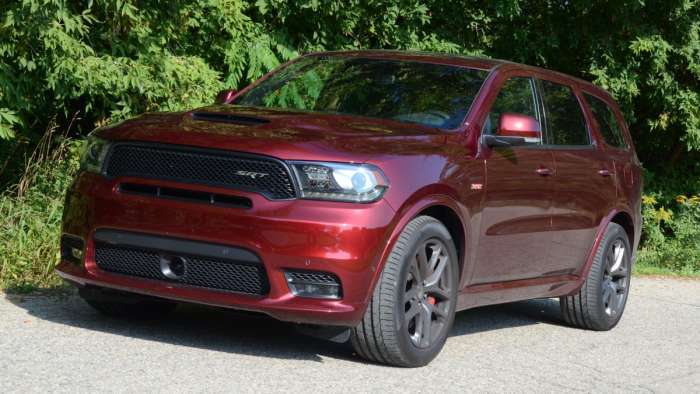 My test vehicle was priced at $76,445 and while that is a hefty chunk of change, there is no other vehicle at this price point that offers everything that you get with the Durango SRT.
If you want a vehicle that can tow, haul, carry six people in the lap of luxury through a deep snow and run 12-second quarter miles in the spring, there is no better option than the Dodge Durango SRT.